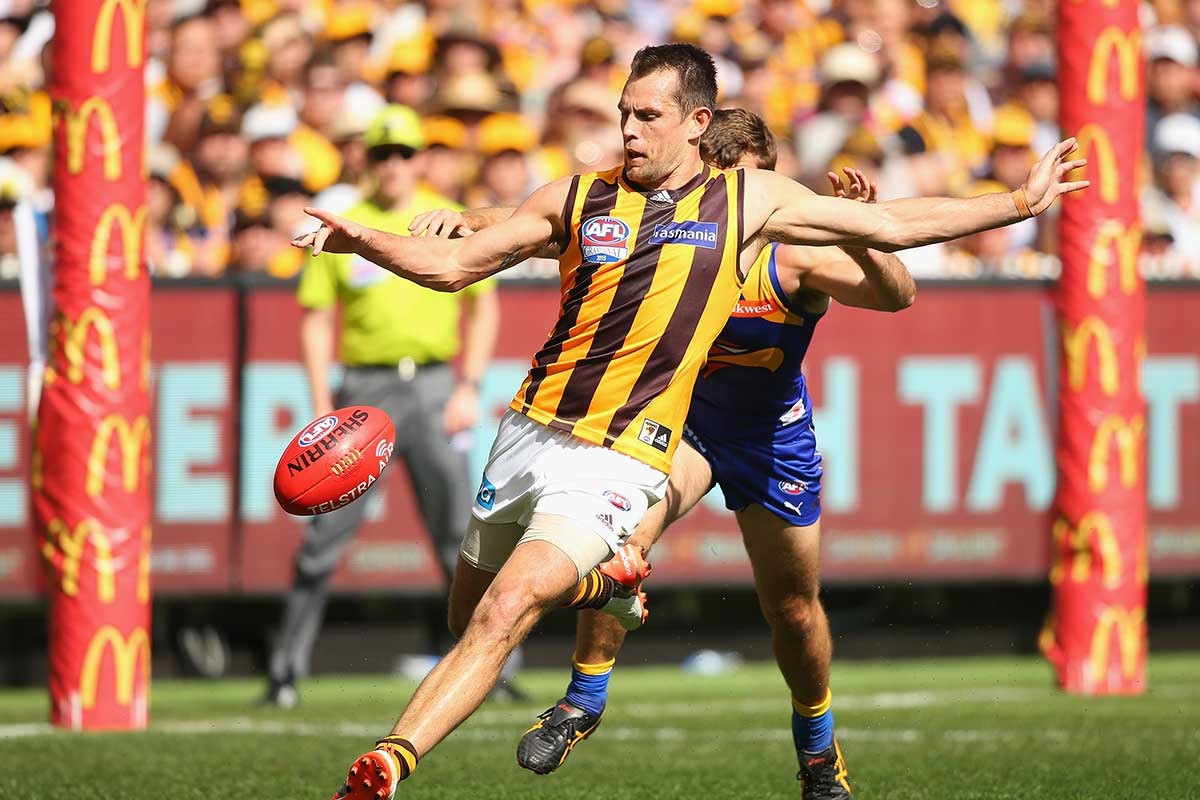 From sublime snaps, muffed marks and chases so good they should have had a wah-wah guitar soundtrack – these are the 10 moments that mattered in Saturday’s AFL grand final.

After potting the Eagles opener, Luke Shuey found himself bearing down on goal again a few minutes later. But, instead of handing off to the better positioned Jamie Cripps, he attempted a dribbler from the pocket and missed. Hawthorn took it down the other end for Ben McEvoy to score.

When Cyril Rioli found Brad Hill alone in the pocket, and the latter slotted the goal with a minute left on the clock, it stamped what had been a dominant first term for the champs. Hawthorn had kicked 5.0 in the opening quarter, and had any Eagles glanced up at the scoreboard they would have seen 1.5 next to their name.

This was the moment Hawthorn knew it was to be their day. A minute into the second quarter, the Hawks skipper was hemmed in on the boundary when he took a handpass from Paul Puopolo. Off a step he nailed a glorious checkside for a goal that never looked like missing. His celebration said it all – this was going to be a good day.

The Eagles needed a lift early in the second, and where better than from their trusty skipper. But when Shannon Hurn, usually one of the most dependable kicks in the league, missed from 40m out, Eagles supporters groaned. And when Jack Gunston goaled for the Hawks immediately afterwards, they swore.

Cyril’s chase was so good it needed a wah-wah pedal. Mark Hutchings must have forgotten that Rioli can run a bit, as he ambled across half-back. Whether he got a legitimate handball away was debatable, but the umpire didn’t think so. Seconds later, Luke Breust pulled off a sublime tap into Jack Gunston’s path, and the big forward kicked his second goal.

Elliott Yeo’s big set shot from 50m after the half-time siren helped keep West Coast alive after a woeful half of football, trimming the margin to 31 points. It was a big moment, and the youngster handled it with nerves of steel.

Jack Darling got it horribly wrong when he misjudged a terrific pass from Dom Sheed. Had he marked and goaled, the Eagles would have trimmed the margin to 19 points at a point when Hawthorn seemed gassed. He fumbled, and moments later Ryan Schoenmakers restored a 31-point buffer.

As the third quarter entered party mode, big Hawk Schoenmakers – who missed both the 2013 and ’14 flags was getting a cheer every time he touched it. But the cheer turned into an eruption when he rose high above a pack to pull down a screamer nearing three-quarter time.

With five minutes remaining in the third quarter, Isaac Smith roved the ball brilliantly off the pack and dribbled it through to make the margin 49 points.

10. Lake plays until the end

With his former Bulldogs teammate Josh Hill bearing down on goal, Brian Lake hurled himself at the ball like Mark Schwarzer to get a touch on the ball. It brought a smile to his coach’s face, his own face and even a wry grin from Hill – who followed it up with a choice expletive in his old mate’s direction.

The moments that mattered in the grand final