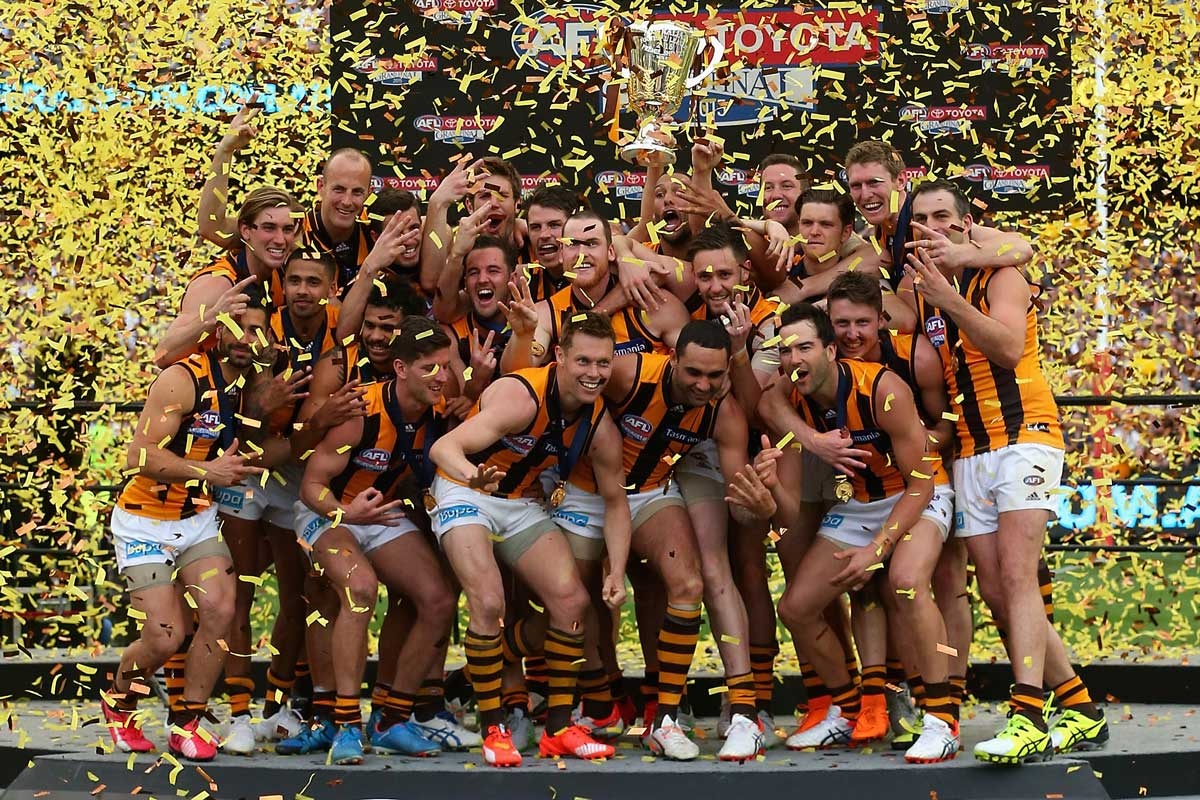 Let the debate begin, here and now. Hawthorn’s four-flag teams under Alastair Clarkson are close to the best AFL team ever, in the context of the league’s equalisation measures.

The draft and salary cap rope and tie everyone else in the competition. But Hawthorn operates under different rules. It is a remarkable organisation from top to bottom.

Are they the best-ever? That the debate even occurs is a feather in the cap of Alastair Clarkson and his team.

Four premierships in eight seasons including three in a row is quite something, up with the 1983-1991 Hawks who won five of nine, and Melbourne’s 1950s teams, and Collingwood’s 1927-30 team that achieved the four-peat that Hawthorn will chase in 2016.

We already knew they were great, so what’s better than great? Let’s run with immortal.

Hawthorn obliterated the Eagles as they had done to Sydney the year before. West Coast’s inexperienced team – just three Grand Final players against 21 for Hawthorn – could not respond to the heat that Hawthorn brought around the football.

It was the hottest Grand Final in history, above 31 degrees, but nobody melted more comprehensively than the Eagles.

Hawthorn is the specialist of the devastating start. In 2014, it had Sydney by seven goals midway through the second quarter and today, the deja vu was unavoidable as Jack Gunston and others went on a romp in the second term, taking the margin out to 44 points.

There was no coming back for West Coast, a team whose time will come later.

Hawthorn would not be denied its piece of history.

There was Shaun Burgoyne, running back in kamikaze mode to mark in the first quarter, little Cyril Rioli causing mayhem in the forward 50, Sam Mitchell extracting and distributing in his inimitable way, Luke Hodge sweeping across the back half and threading a ridiculous checkside goal from the boundary, and Isaac Smith the roadrunner out on the wings, all causing maximum damage.

West Coast had its chances but fluffed them.

The Eagles were a nervous team, boys against men.

They kicked 8.13 when they knew they could not afford such profligacy, and that includes the last three goals of the game when the Hawks were either in celebration mode or physically shot in the 30-degree heat.

Luke Shuey’s selfishness in the forward half – once in the first quarter and again in the third when West Coast was making its only genuine thrust of the match – stood out more because Hawthorn’s stars gladly sacrificed individual glory for the sake of the team.

But Shuey was not alone in struggling in the moment.

Coleman medallist Josh Kennedy was held to his only goalless game of the season by James Frawley, in the former Melbourne defender’s first grand final.

Even Brownlow Medal runner-up Matt Priddis could not influence the contest and Nic Naitanui had just a handful of disposals.

Jack Darling could not find the football and dropped a crucial chest mark when the game was still alive in the third quarter that will haunt him for a while.

West Coast was not ready; Hawthorn surely was.

It was a measure of the Hawks’ greatness that the Norm Smith Medal voting would have been tricky. Rioli’s contribution, two goals and a hand in at least seven others, was rightly acknowledged by the judges, and he joined his uncles Maurice Rioli and Michael Long in winning that gong.

Some of his interceptions and deft touches were wickedly good; his 18 disposals gave the lie to the value of statistics, for his game was the most influential of anyone in brown and gold.

Yet Sam Mitchell, who finished second in the voting, would have been a worthy winner, too, and Frawley’s contribution in obliterating Kennedy and winning plenty of the ball himself gave him a chance, along with the blistering Smith, who had 23 disposals and three goals.

In 2004 the Hawks won just four games and lost a coach in Peter Schwab, just eight years after a failed bid to merge with Hawthorn.

The club’s board chose Alastair Clarkson ahead of a Hawthorn legend in Gary Ayres, because president Ian Dicker and board member Jason Dunstall liked Clarkson’s style.

At the time, he had been working under Mark Williams at Port Adelaide but previously he had coached a premiership with Central District in the SANFL and he had ideas about how the game should be played.

The club already had Hodge and Mitchell but in the weeks after Clarkson’s appointment, it drafted Lance Franklin, Jarryd Roughead and Jordan Lewis and the rebuild had begun, although it took three years to kick in with the surprise flag in 2008.

Each of the hat-trick premierships of 2013-14-15 seemed better than the other, achieved up against hardship.

But they have prevailed again.

As for Clarkson, as the coach of four premierships he joins the likes of Jeans, Matthews, Sheedy, Parkin, Barassi and Hafey.

The little man from Kaniva deserves to be in that company, too.

They can start working on the statue to join that glowering figure of John Kennedy senior out at Waverley.

Collingwood’s four premierships in a row is about to be challenged. And who would write this team off from such a feat?

Why Hawthorn are the best we have ever seen