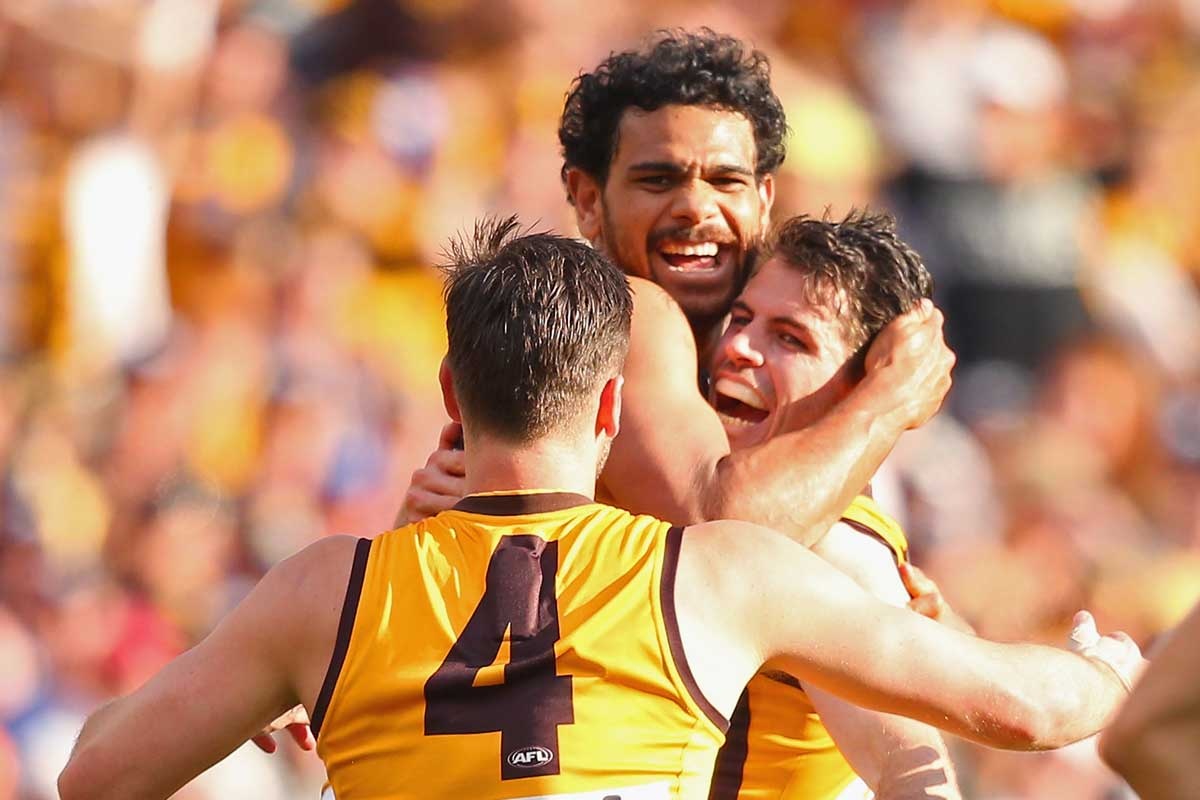 Hawthorn has cemented their status as one of the greatest sides in VFL/AFL history, thumping West Coast by 46 points to win their third successive premiership.

Trailing by 31 points at half-time, the Eagles made their move early in the third quarter when goals from Mark Hutchings and Jack Darling cut the margin to an even four goals.

But the Hawks rebounded with two goals from a dominant Jack Gunston (four for the match), and one each from Isaac Smith and Matt Suckling, hitting three-quarter time with a 50-point lead.

It is only the sixth ‘threepeat’ in AFL history and Hawthorn now have won 13 premierships.

Clarkson is also the first four-time Hawthorn premiership coach, after they also upset Geelong in the 2008 grand final.

Hawthorn’s Sam Mitchell dominated the midfield with 34 touches, while his fellow veterans Luke Hodge and Jordan Lewis tallied 30 and 26 respectively.

But it was the electric Cyril Rioli who won the Norm Smith medal, thanks to a wonderfully creative display which was far better than his 18-disposal and two goals suggest.

West Coast’s big guns simply failed to fire, with Josh Kennedy (five disposals) and Mark LeCras among those who were missing in action.

After Luke Shuey kicked the first goal of the game, Hawthorn kicked the next five and had a 19-point lead at the first break.

Worryingly for the Eagles, they had kicked a wasteful 1.5 and their scoring inaccuracy was another key factor when the game was still in the balance.

At the start of the second, Hawks skipper Hodge snapped a freakish goal.

A couple of minutes later, his Eagles counterpart Shannon Hurn had a straightforward set shot from straight in front.

He missed and, moments later, Gunston kicked a goal for the Hawks.

It was a potent symbol of how the game was going.

Hawthorn extended their lead to 44 points before West Coast rallied with the last two goals of the half, including a booming shot from Elliot Yeo after the siren.

The margin was a gettable 31 points and, when Jack Darling kicked the first goal of the third term, it was only 24 points and game on.

Then came two critical errors – Shuey’s pass inside 50 went straight to Taylor Duryea when there were options everywhere.

And Darling dropped a simple mark within scoring range.

Hawthorn rebounded and Ryan Schoenmakers kicked a goal that relieved plenty of pressure.

After Mark Hutchings kept it tight with a snapped goal, two to Gunston broke the rubber band.

The second of those Gunston goals was courtesy of Rioli’s stunning handball intercept.

By three-quarter time, the margin was 50 points and the game was over.