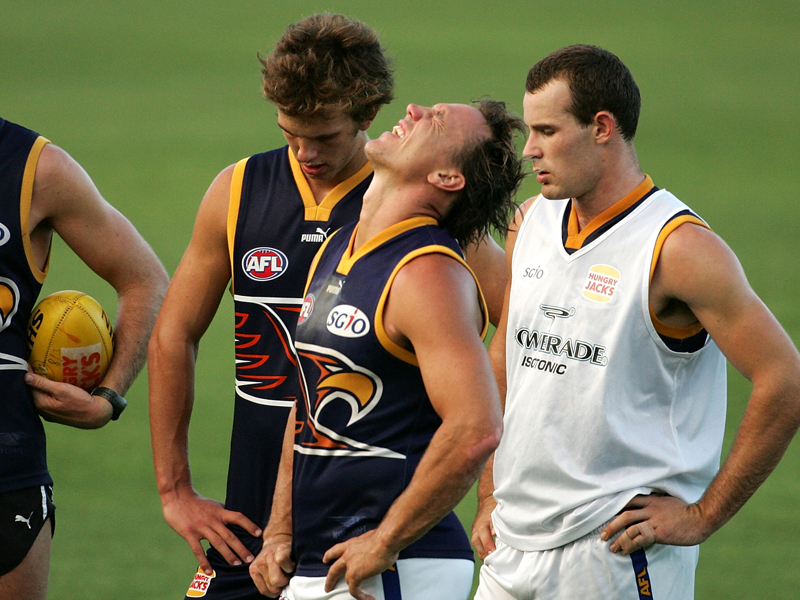 Daniel Kerr says his former Eagles teammate Daniel Chick is “delusional” for saying he abused asthma medication to give him an edge during games.

Kerr has denied Chick’s claims he and Ben Cousins abused the asthma drug prednisone during their 2006 premiership season – which is banned under anti-doping rules – and says he doesn’t know why Chick believes they did.

• The real truth about West Coast Eagles fans• Why Josh Kennedy is the jewel in the Eagles’ crown• Freo fans lose control. Should they be in a cage?

“Maybe he was delusional at the time which is really sad,” the 32-year-old told an AFL grand final lunch in Melbourne.

Speaking to News Corp in an exclusive interview, Chick unveiled a host of antics that were kept quiet by the AFL club for more than a decade.

Chick told News Corp that strong asthma pills like Xanax, Sudafed, Stilnox and Valium were just some of the drugs sometimes provided through the Eagles that were used by several players.

He revealed that he and former teammates Kerr and Cousins took large amounts of asthma drug prednisone, with experts describing their pattern of use as “bizarre and inappropriate”.

“At those levels it’s the same as being a full-on meth addict,” Chick told News Corp.

“The lack of sleep, the depression, it affects your mental health, coping mechanisms, metabolic rates and causes memory loss and sleep issues. It’s not a coincidence the three of us have had issues with substance abuse.”

Chick played for West Coast from 2003 to 2007 and was part of the team’s one-point defeat of Sydney to win the 2006 Premiership.