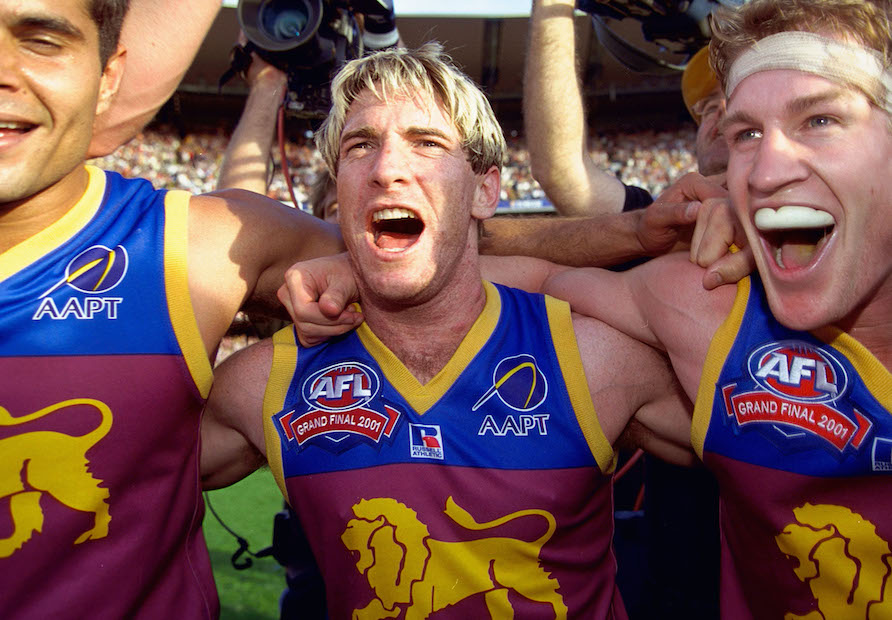 Grand final week is a bit like your first date with your dream girl but all your mates know and want to be a part of the whole process.

I was lucky enough to be part of grand final week in four straight years.

The first time was one hell of a week. My experience started fairly normal on the Monday, with a team meeting review of the game. We had another meeting to go over some logistics with tickets and travel.

Believe it or not, our flights had to be chartered by the AFL because the airline everyone used to fly in, Ansett, collapsed.

Crazy stuff but just when it couldn’t get even more hectic, on the Monday night I won the Brownlow Medal. I had to deal with not just the pressure of playing but the pressure of everyone else’s expectations, which instantly went through the roof.

I was Norm Smith Medal favourite the very next day. Talk about pressure.

So, as you can imagine, our first time going to the big dance was very eventful.

I’ll say, though, that none of the other grand final weeks we were involved in were anything like that first time.

To give you some idea what it is like for a player, this week is quite hard.

The best part in my mind is knowing that this is the last week. For some reason, it seems like the unknown part of the weeks prior disappears into some sort of certainty.

The one part of the week that you can never be ready for is nearly everyone you know trying to ring, text or email you with wishes of good luck.

Now don’t get me wrong, it is a nice thought but a complete pain in the neck. I learnt very quickly to turn my phone on and checked it a couple of times a day.

For my mind to deal with the constant intrusion, I would always text well-wishers with the same message: ‘Thanks for the message, looking forward to Saturday’.

That saved me a lot of mental energy the next time around and it would be the most important piece of advice I would be giving to the West Coast players and support staff.

Thankfully for us, we had Leigh Matthews as coach. Leigh, as a player and a coach, had been involved in grand final week many times and knew what to expect, plus what to watch out for.

Leigh would say the best way to deal with the extra hype was to imagine you are inside a bubble. Just look out and you can see what is happening but that you are not involved at all. Good advice.

The funniest thing was, with so many distractions, the best part is actually training. You are just doing something instead of thinking about it and you really do feel like you are running on air. Just floating along.

While Hawthorn will be old hat at this week, the Eagles will be dealing with this largely for the first time.

Another unusual part of the week for West Coast point of view is that players with partners and families will have them in Melbourne with them.

For us, the partners of the players in Brisbane would stay at another hotel as Leigh wanted to make the preparation as normal as possible. I don’t know what West Coast are doing this week about that but it’s still something that they will have to deal with that Hawthorn will not.

Does Hawthorn therefore have an advantage? As far as saving energy for the big game, yes. West Coast could easily get caught up in the mental drain that people around you become in this week.

When there are only two teams left, the focus obviously goes through the roof. There is story after story and, of course, the players get a chance to be interviewed at least once in that week.

Some players decline but reading your own quotes in the paper or on the TV can be another stress some players might not have felt all year.

Well, I don’t know for sure. The odds are in Hawthorn’s favour, no doubt. But only just. Winning three in a row is a mighty feat.

If any team though could challenge Hawthorn’s dominance it is West Coast. The main reason is the intimate knowledge of the Hawthorn team players and tactics, thanks to coach Adam Simpson.

He knows what they are trying to do. Who to target. How to stop their game plan and maximize their own chances of scoring.

Both teams’ structures are governed by the fact the midfield must be on top. No doubt the strongest midfield on the day should be the one who wins.

However, that statement should come with a big ‘but’: the forwards need to kick straight.

I think West Coast can provide themselves with enough shots on goal.

Fremantle, in 2013, kicked themselves out of the game with some simple misses in front of goal.

In fact, Geelong kicked a staggering 21 points to allow Hawthorn to stay in the game long enough to eventually take advantage of it to win in 2008.

In the end though, as a former player of the game and now coach, I hope it is a tight, thrilling game. I think for the people all around the world that only watch this one match for the year, the best advertisement for our game is a fantastic spectacle and a tight score line.

I’ll tip Hawthorn to win but I would be very happy to be wrong. I hope this first date for West Coast goes very well indeed.