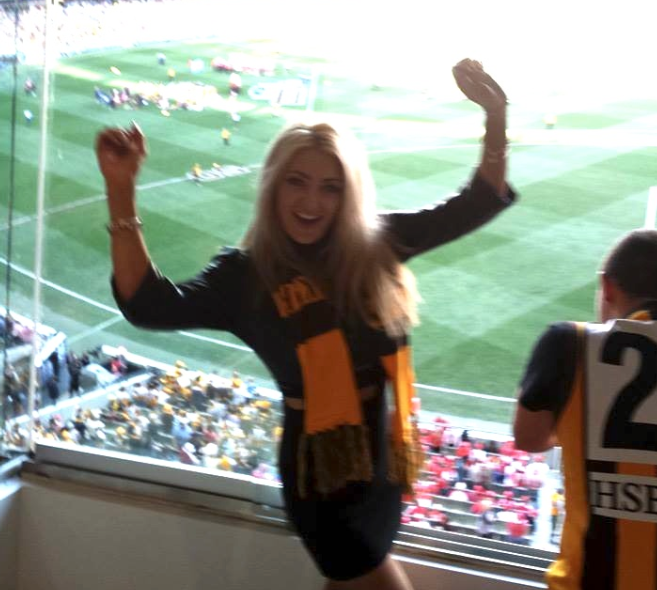 The model who shocked the nation when she stripped off at last year’s AFL grand final is back in Melbourne to cheer on her team and provide some entertainment on the side.

Gold Coast woman Heather McCartney, 27, told the Herald Sun she was very excited to be back supporting the Hawks ahead of Saturday’s blockbuster against West Coast, and that she had something in store for her loyal fans.

• ‘They won … I got naked’: AFL grand final flasher
• All you need to know about the NRL grand final
• Former Eagles star exposes club’s drug culture
• What the Eagles need to do to beat the Hawks

“I can’t say too much but I’m keeping my clothes on. My best friend is a body painter and he’s one of the best,” Ms McCartney revealed.

“I’m very excited. I just got a new scarf now because the one I had last year got confiscated.

“I’m not sure whether the police took it or if someone has it hanging up on their wall somewhere.”

Ms McCartney found fame during the 2014 grand final, when she was arrested and fined $300 for stripping off completely in a corporate box.

Several people managed to capture the moment on camera, posting it to social media.

Ms McCartney, who also goes by the name Miss Lady Darling, now has 106,000 followers on Instagram.

The Scottish-born glamour model told the Herald Sun she would again be enjoying the comforts of a corporate box this year, albeit a different box to the one she frolicked in last year.