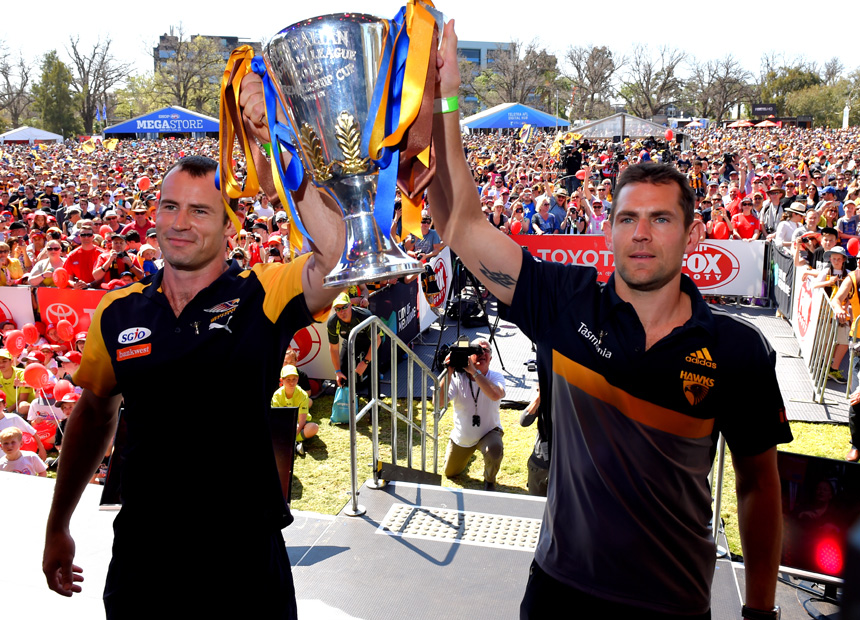 Hawthorn coach Alastair Clarkson says his side are expecting a “tough and hard” contest in Saturday’s AFL grand final against West Coast Eagles.

Speaking after Friday’s pre-match parade, the three-time premiership winning coach said the hot weather, and the extra week of rest for West Coast, won’t give the Perth-based side an advantage.

“It’s going to be hot and horrid and that’s the way Grand Finals are played, tough and hard,” Clarkson said.

• ‘They won … I got naked’: AFL grand final flasher
• All you need to know about the NRL grand final
• Former Eagles star exposes club’s drug culture
• What the Eagles need to do to beat the Hawks

“One extra game over 30 weeks doesn’t make a lot of a difference in my view.

“We’ve played on these sort of conditions on grand ginal day before … Both teams have got to put up with it. It’s just a matter of will power.”

“I think it’s irrelevant (the weather) … it won’t make a difference,” Simpson said. “I don’t think we’d be here if we had to rely on that.”

“Every player goes through different emotions … you’ve got to embrace what goes on over here.

“We’ll bunker down tonight and give it everything tomorrow.”

Hawthorn captain Luke Hodge confirmed his body is injury-free, while Eagles’ skipper Shannon Hurn said a chance at a premiership medallion was the stuff of childhood dreams.

“I have pulled up fine,” Hodge said.

“Everyone has a different routine post games and mine was a little bit different through the week. There is no issue at all.”

Hurn said: “We understand it will be a hard game but we can’t wait for it pretty much.”

“End of the day it is about the contest and making the most of the opportunities … it’s a great opportunity. It is every kids dream and were excited about this week.”

Thousands of fans turned out for the Melbourne parade in stunning 27 degree conditions.

It was a perfect day for the inaugural grand final parade public holiday, and crowds certainly took advantage of the day off.