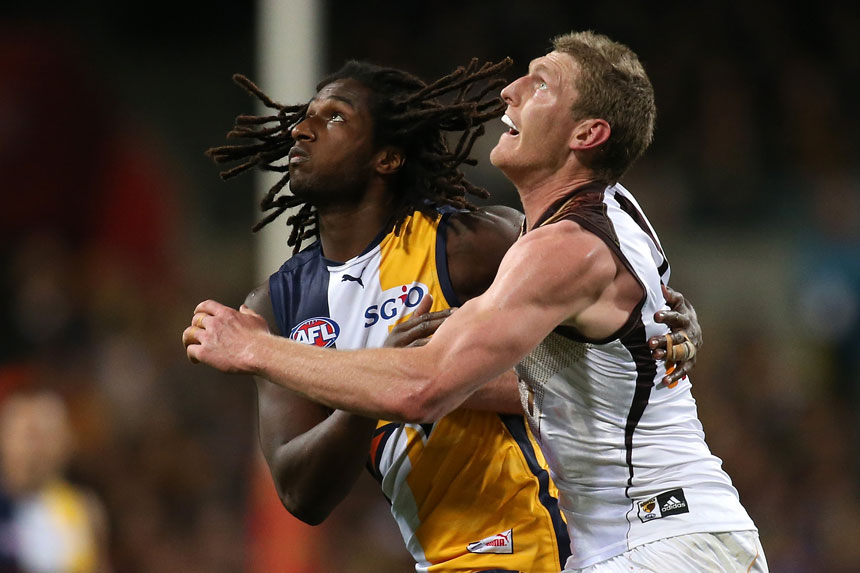 West Coast power forward Josh Kennedy has kicked 80 goals in season 2015, 17 more than any other player. He averages almost seven marks per game and if he kicks straight, the Eagles normally win.

Then there’s Jack Darling. Fit and fresh after an injury-interrupted start to the season, he crashes parks, marks well and averages nearly two goals per game.

Kennedy and Darling are the Twin Towers, but the versatility of Mark LeCras (44 goals in 2015), the flickers of brilliance from Josh Hill (39 goals) and the ferocity of Jamie Cripps (34 goals) means West Coast’s forward line is far from a two-man show.

Hawthorn’s defence will have their hands full. So will West Coast’s.

To put that into context – no other side has four players to have kicked 40 goals in 2015. In fact, only one, semi-finalist Adelaide, has three.

While Roughead floats up the ground, Gunston is more of a lead-up forward. And when the ball hits the deck, the manic pressure of trio Breust, Rioli and Paul Puopolo often results in a goal.

With both forward lines bursting at the seams with talent, the 2015 grand final will be won in the midfield.

It means the most crucial battles will be in the ruck, at the clearances and on the wide, deep wings of the Melbourne Cricket Ground. Probably the most important battle of the day. Mitchell needs 17 or more disposals on Saturday – surely an absolute given – to record the highest tally in a finals series since Champion Data began keeping AFL stats in 1999.

He has enjoyed a superb season and will win his fifth Hawthorn best-and-fairest award later this month. Priddis – second in the Brownlow Medal, a place above Mitchell – was also vital in his side’s preliminary final victory. Both are clearance kings and will get plenty of the ball. How they use it will shape who the winner of this battle is.

Smith’s importance to Hawthorn has been showed when he – and not Mitchell – has been the one tagged this season. Both of these wingmen are quick and good users of the ball. Gaff will get more of the ball than his counterpart. Only three players this season have had more disposals.

But Smith’s ability to tuck the ball under his arm, take a bounce and break lines with his long, accurate kicking is equally damaging. If he gets more 25 disposals or more, look out. A vital battle given the importance the wider MCG will play.

One that the Eagles will expect to win. Naitanui’s tap work this season has been nothing sort of sensational and he dominated in the ruck in the Eagles’ 32-point qualifying final win over the Hawks. He routinely gives West Coast’s midfield brigade first use of the football and the Hawks pair will just be out to nullify his influence.

Around the ground, Naitanui’s impact is not as influential – even if he is capable of the odd screamer. All four players are capable of going forward and kicking a goal when required. Hawthorn will surely adopt their regular ‘third man up’ strategy around the ground.

While it is unlikely Sheppard will sit on Rioli all day, given the fluid nature of West Coast’s defence, he will probably start on Hawthorn’s little genius. Rioli is Clarkson’s trump card and if he is on, he’ll be a huge chance to win the Norm Smith Medal.

His goalsmarts, tackling pressure and ability to fly high and crash packs means Sheppard and his West Coast team-mates will have their work cut out. But the Eagles can take heart from Rioli’s grand final record – he has kicked just three in four appearances on the biggest stage.

Is this match-up now the norm for modern day footy? Hawthorn’s key forward and the Eagles’ star back-man will start on each other but are likely to drift all over the ground – meaning one-on-one contests between the pair might be a rarity.

One of the keys to West Coast’s success this year has been the ability of McGovern, Brad Sheppard and Elliot Yeo to intercept mark. Roughead kicked five and was vital in Hawthorn’s fierce start against Sydney in last year’s grand final. How those in brown and gold would love a repeat.

Kennedy’s 2015 record speaks for itself and his ability to run up the ground rules Brian Lake out of one of the toughest defensive jobs in footy. Frawley was hammered for his performance against the Eagles in Perth three weeks ago but it’s worth remembering that most of that was for his first half – when he was played up forward.

Kennedy kicked 3.2 from 9 marks and 16 touches on that occasion. Ex-Demon Frawley has shut down Taylor Walker and Matthew Pavlich in the last two weeks to win the Hawthorn faithful back but he has another huge task on his hands.

Duryea picked a great time to produce his career-best game for the Hawks, registering 26 disposals, taking 10 marks and kicking a magnificent goal in his side’s win over Fremantle last week. Duryea’s elite foot skills stood out – as did his attack on the ball.

But LeCras shapes as a real Norm Smith Medal smoky. With 338 goals in 153 games, he is a proven goal-kicker and his qualifying final against the Hawks showed his worth. Equally comfortable as a lead-up forward or close to goal, he took nine marks, had 20 touches and kicked two goals on that occasion. Has been held goalless just three times this year and looms as a danger man. Big job for Duryea.