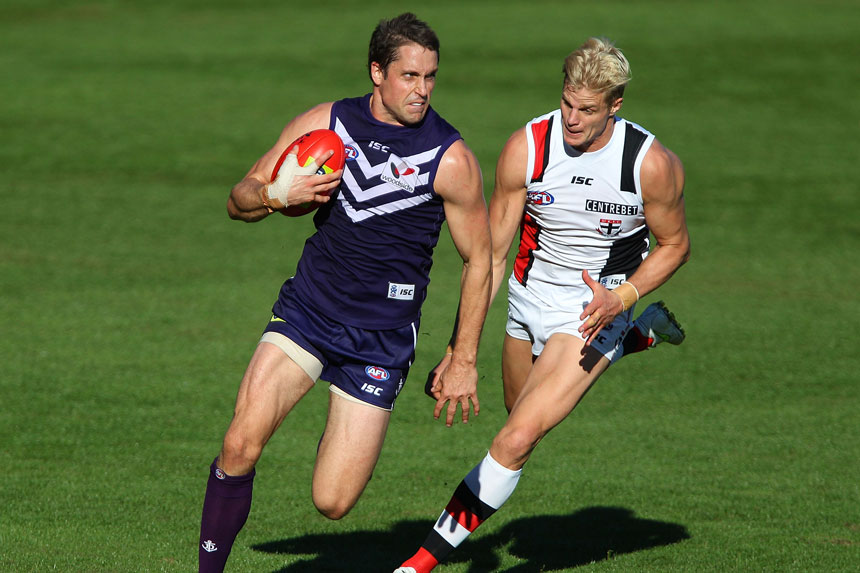 Experienced Fremantle defender Luke McPharlin has announced his AFL retirement, bringing down the curtain on a 256-match senior career.

The 33-year-old McPharlin, who missed the Dockers’ finals campaign because of a lingering calf injury, made his AFL debut with Hawthorn in 2000 after being recruited from East Fremantle.

He played 12 matches for the Hawks before being traded to the Dockers ahead of the 2002 season.

McPharlin made 244 appearances for the Dockers and was an all-Australian in 2012.

He said in a club statement he “pretty strongly” considered retiring after the 2014 season before making the decision to return for one more go around.

“There was always a scenario in the back of my mind that this would be my last season,” he said.

“Ultimately, it’s time to hang up the boots and move on to other things.

“When you get to my age and my time in the game, there are a lot of factors that need to be considered.

“That’s certainly my wife and family.

“The coach, strength and fitness staff and, of course, the way I feel about playing another year.”

A misty-eyed McPharlin took a lap of Subiaco Oval with his wife, Kalinz, after Friday’s preliminary final loss to Hawthorn.

Joining the defender on the field after the game was veteran Dockers forward Matthew Pavlich, whose retirement plans are still unknown.