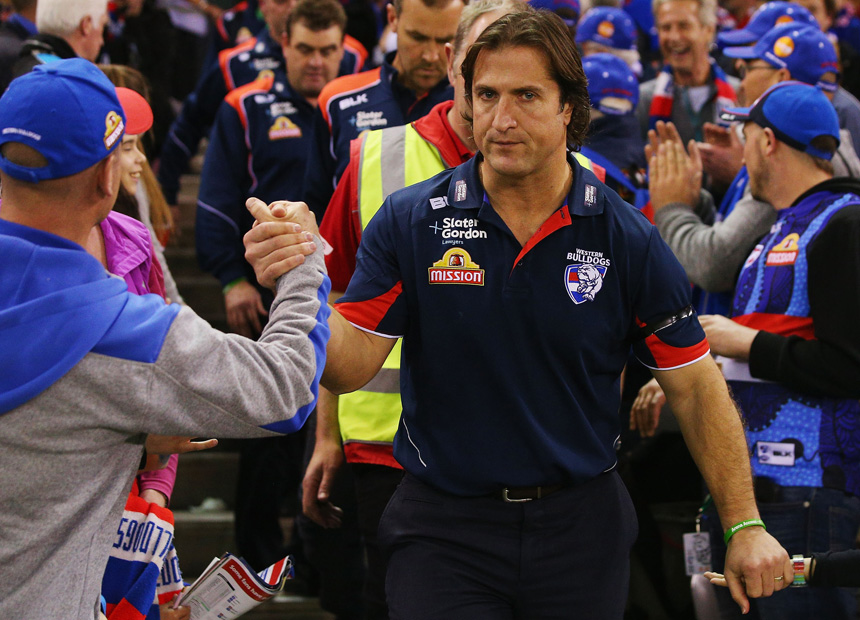 It's believed coach Beveridge has offered Boyd the chance to play on. Photo: AAP. Photo: AAP

First-year success Luke Beveridge has won the AFL senior coach of the year award after the Western Bulldogs’ stunning season.

Beveridge took the Bulldogs from 14th last year to an elimination final, where they lost to Adelaide.

In a close vote, Beveridge polled 365 votes ahead of West Coast’s Adam Simpson. Fremantle’s Ross Lyon was a distant third on 116.

Simpson has led the Eagles to Saturday’s grand final against Hawthorn in only his second season and also would have been a worthy winner.

Tuesday evening’s AFL Coaches Association awards function in Melbourne was an emotional one, with a moving tribute paid to Phil Walsh.

The Adelaide coach died on July 3 and the association has set up an annual scholarship in his name.

It will be worth $10,000 and be awarded to a member of the association for personal development through study and travel.

The inaugural scholarship holder will be announced at the association’s annual general meeting next March.

Jeans died four years ago and Hawthorn great Dermott Brereton paid tribute to him at the function.

The career and development award went to Paul Hudson, who is also working at the Saints.

Western Bulldogs star Marcus Bontempelli won the best young player award, which is based on his first two AFL seasons.

Tactics guru David Wheadon, who has been an assistant coach at several AFL clubs, won the association’s lifetime achievement award.

Sydney onballer Dan Hannebery was revealed as the AFLCA’s player of the year weeks ago.