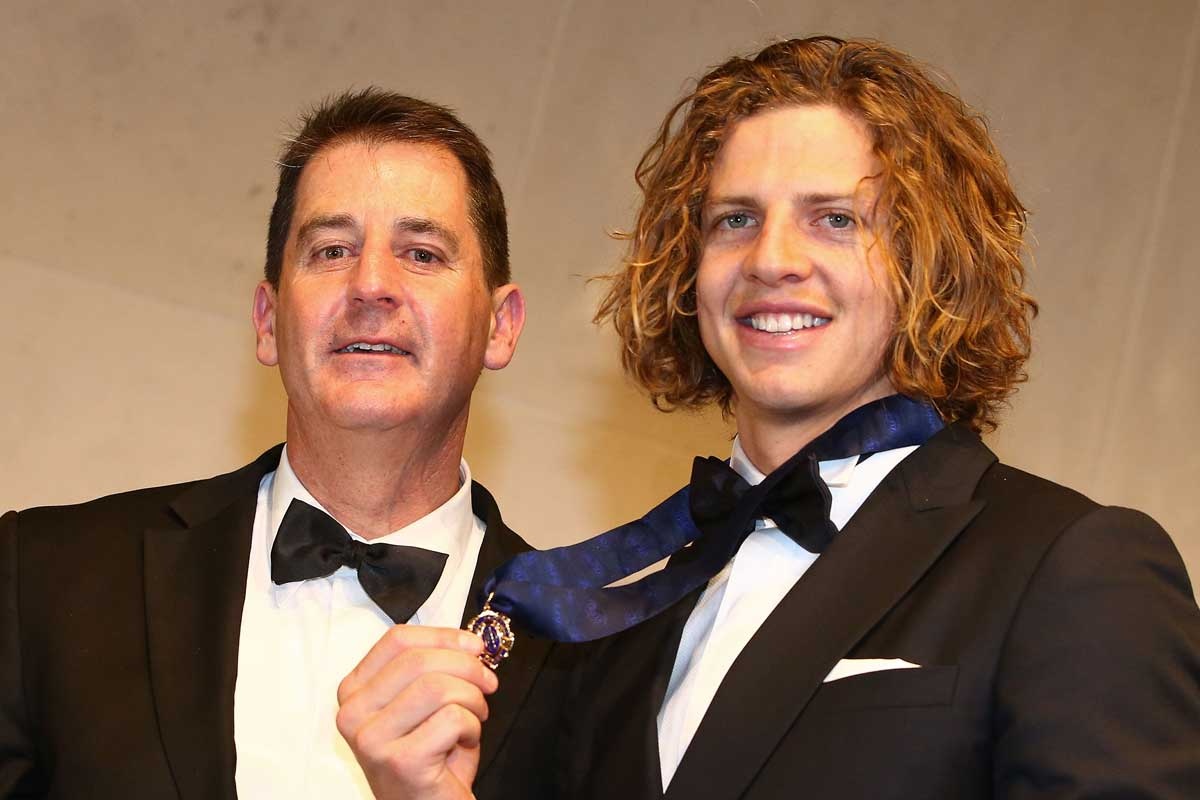 Brownlow Medal night has become a crass, commercial assault on the senses with logos and product placement as far as the eye can see.

Is there a more pointless exercise than the Swisse red carpet?

And the question that smacks of generation selfie: “who are you wearing tonight?”

Of all the red-carpet arrivals only Jonathan Brown offered any kind of commentary on the absurdity of it all.

“I’m wearing Target,” he deadpanned when asked where he had procured his tuxedo.

Even the popular winner, Nat Fyfe, the country bumpkin with the bed hair and a smile as wide as Lake Grace, made sure he looked after his backers.

“I’d like to thank my sponsors,” he said. Lexus of Perth and Adidas, in case you were wondering.

Being a sports fan is a tricky business.

What attracts you to sport in the first place is the purity of the battle – be it of body or mind – and the aesthetics of the contest.

A 30-metre screamer, a left hook right on the button, a hanger, a checkside from an impossible angle – these are moments that seduce and take the breath away.

Once inside a sport, one takes pride in becoming familiar with its nuances and traditions.

For Australian rules football, there is no night more steeped in mystique than the Brownlow Medal count.

It was once a treasured fixture on the Australian sporting calendar.

I can tell you Brownlow Medallists like other disturbed people can rattle off American presidents.

But as the event has become richer, it has cheapened in the minds of many.

In an interview, Fyfe and Wayne Carey enjoyed comparing their Bvlgari watches, while Luke Darcy noted that “Fyfey” must have “won a few Tissots this year”.

A Tissot watch is awarded for the best on ground in a Friday night match.

You may not have heard, but Tissot will be awarding 23 watches to whoever wins the Premiership on Saturday.

The company had Jude Bolton journey to Switzerland to pick up the timepieces, which are “the result of discussions over a number of years between Tissot and the AFL”.

“The timepiece commemorates the occasion with a case back that features an exact replica of the AFL Premiership medallion and a strap inspired by the medallion lanyard with matching royal blue colouration and a uniquely designed material.”

Jude himself is enthused.

“A Premiership is a moment etched in time, but also a memory that lasts forever, which is why a watch is a perfect symbol to complement the medallion on Grand Final day,” Bolton said.

One suspects we might hear more about these watches on Grand Final day.

During Monday night’s Brownlow count, the AFL website’s live vote tracker featured live betting odds on each of the contenders, which were linked to Crownbet.

Sports media expert David Rowe from the University of Western Sydney says the commercialisation has become brazen in recent years.

“If you think of free-to-air television and its current problems, sport is one of the few cards it can play – premium sport, both the live contests, and the awards night,” Professor Rowe said.

“I think there’s a kind of shamelessness about it now.

“People used to be a little embarrassed. I think rather less so now.”

This didn’t happen overnight, but I’m a bit slow on the uptake.

It’s been a gradual creeping, that hasn’t really grated until now.

But for a game that is increasingly losing touch with real people – people in the outer screaming themselves hoarse, who perhaps can’t afford to drive a Lexus, or wear a Bvlgari watch – it shows where footy’s interests really are.

This article was brought to you by The New Daily. How the Brownlow Medal sold its soul