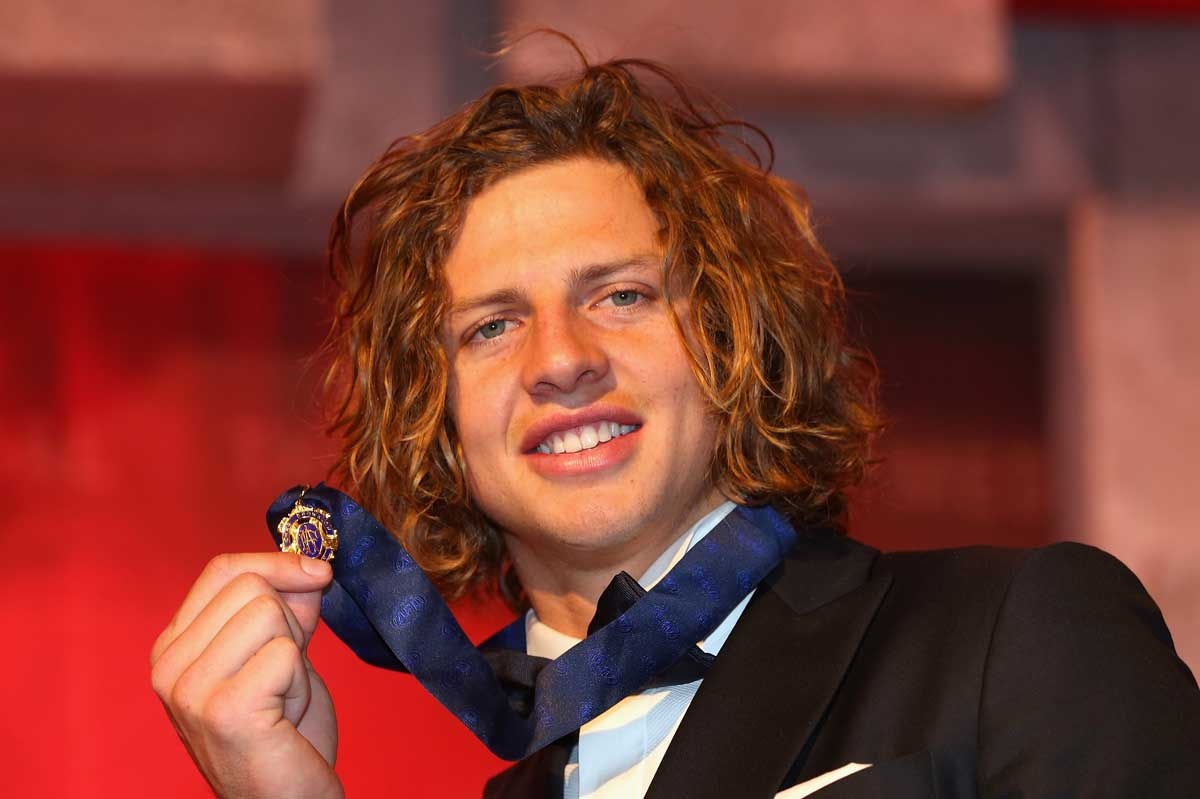 It was confirmation of what we already knew – Nat Fyfe is the best player in the AFL.

Fyfe, 24, won the Brownlow Medal on Monday night thanks to his barnstorming start to the season.

He won the award with a round to spare, when his nearest challenger – reigning medallist Matt Priddis – failed to poll a vote in Round 22.

The numbers were impressive.

Fyfe’s start to the year was one of the best ever seen.

After eight rounds he had polled 17 votes, breaking Chris Judd’s record of 16 through eight rounds set in 2010.

After 14 games he had amassed 29, and although the challengers closed as the count continued, Priddis fell three votes short of back-to-back Brownlows.

He finished with 31 votes, three clear of Priddis with Hawthorn’s Sam Mitchell a further two votes behind on 26.

“It’s greater than me,” Fyfe said when asked what the medal meant to him.

“It’s the Fremantle footy club and all our members and fans and supporters.

“I think we can take this home and really celebrate as a club.”

Fyfe was parked on 31 votes for the final six rounds, and he said he was feeling nervous as the challengers closed.

“I wouldn’t advise doing it to anyone,” he joked.

“The last few days have been a whirlwind … until I really sat down and the vote got under way, I didn’t really put much thought into it, to be honest.

“But the nerves started to come late.”

Fyfe’s coach Ross Lyon described him as an “elite preparer” with a “really strong mind”.

“Even though he’d already won our best and fairest and was a top-flight player he wanted to be something special,” Lyon said.

“All summer he was just tearing the house down on the track.

“Once we started playing games he just erupted.”

Fyfe had to attend the ceremony with the aid of a walking stick, after fracturing his fibula during Fremantle’s loss to Hawthorn on Friday night.

“It’s not token,” Lyon said. “It’s a fully displaced fracture of the fibula.

“He went in with a concern, but it wasn’t a fracture.

“He’ll have a pin put in tomorrow – or maybe the next day now.”

There was controversy during the count, when the official AFL shop website listed a framed guernsey from Hawthorn’s Sam Mitchell as the ‘2015 Brownlow Medallist’.

But the AFL apologised after it emerged mock-ups were made of the six leading contenders for the award, and the Mitchell item had been placed on their site by mistake.

Fyfe, the son of long-haul truckers from Lake Grace in rural Western Australia, paid tribute to his family.

“The transport business is a story that’s been written about … and at some point I’ll go back to that, but my family have been nothing but supportive the whole way through – of everything except my hair, to be honest,” he said.

“I can’t thank them enough for their support.”

Fyfe’s teammates and other AFL players were quick to take to social media to congratulate the champ.