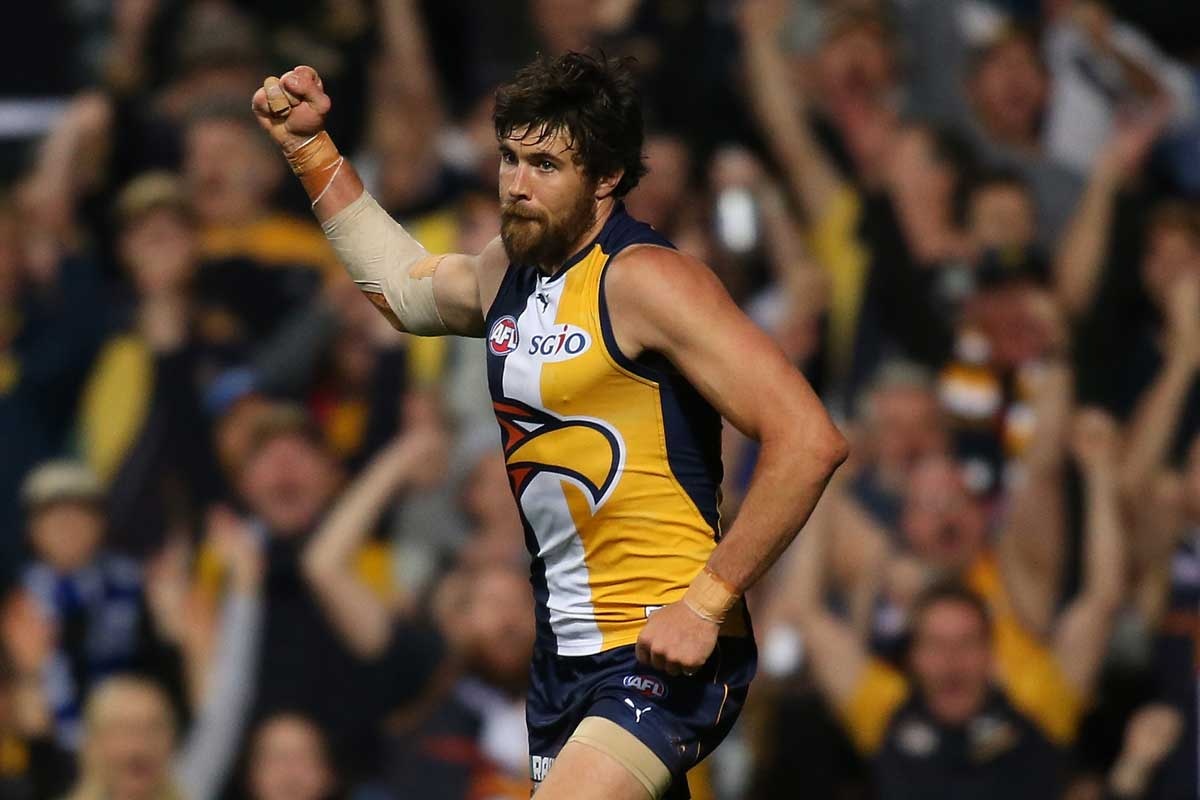 It was the kind of moment that changes a game of footy.

With his side goalless well into the second quarter, and the pressure building, Josh Kennedy sprinted towards the West Coast Eagles attacking 50, calling for a kick over the top from Mark Hutchings.

He charged in behind Lachie Hansen, but – with eyes only for the footy – Kennedy was dreadfully exposed to a hit from North Melbourne defender Scott Thompson.

• Life ban for Fremantle supporter
• Hawks keen to get Eagles on home turf
• Hawthorn vs West Coast: we pick the winner

Kennedy’s commitment was unwavering, taking the mark just inside 50 as Thompson cannoned into his body.

If Kennedy was hurt he wasn’t showing it and, perhaps aware of the fact that Thompson himself was in pain, he got up and charged into goal.

It was inspirational, and from that moment on the Eagles bossed the terms against the Kangaroos.

It’s acts like that make Kennedy the most important man in the Eagles quest for the most unlikely of premierships.

At 28, Kennedy is still improving.

Other than 2012, a season that was blighted by a severe ankle complaint, Kennedy’s impact has grown steadily year on year – culminating with his first Coleman Medal and a maiden all Australian berth in 2015.

At this moment, Kennedy is the most valuable key forward in the AFL.

It could have been so different, when he went down clutching his right elbow during a thumping win over GWS.

There were reports at the time surgery on the joint could end Kennedy’s season.

Concerns for Josh Kennedy after he hurt his elbow in this incident. #AFLEaglesGiants http://t.co/kOkg9wGboi

Instead, he strapped it up every week and enjoyed the best season of his career.

In years gone by there have been knocks about his ability to get hold of decent opposition, kicking big bags against the likes of the Western Bulldogs, Carlton and GWS.

But he has a knack of bobbing up against the best sides too – he kicked four against the Hawks in a losing effort in Round 19, while he snared three in West Coast’s qualifying final win.

And it’s not just the goals – it’s his intensity at the contest.

He chases defenders like they’ve stolen his wallet, crashes packs with reckless abandon.

Kennedy, along with his fellow forwards Jack Darling and – in particular – Jamie Cripps, exert a pressure that means opposition defenders are always under the pump.

With Kennedy leading the way, Hawks defenders Josh Gibson, Brian Lake and James Frawley will not be afforded the same time and space Fremantle allowed them on Friday night.

His constant menace creates space for the dangerous Mark LeCras and Josh Hill, even when he’s not getting the ball.

In 2007, a lot of West Coast supporters viewed the unproven Kennedy as little more than a set of steak knives in the deal that saw Chris Judd end up at Carlton.

He’s now the most important jewel in the Eagles considerable attacking crown. Author Salman Rushdie stabbed in the neck by masked assailant on stage
Melbourne society icon Lillian Frank dead at 92
Foreign Minister Penny Wong vows to keep working to free Aussie journo Cheng Lei from Chinese jail
Cameron Smith and fellow Aussies in the thick of it at PGA’s Memphis tournament
Taiwan thanks US for maintaining regional security in the face of Beijing’s bullying
Ex-Liberal staffer: Survivors weren’t asked about their ordeals in NSW parliament
Freo fans lose control. Should they be in a cage?
Today's Stories

Why Josh Kennedy is the jewel in the Eagles’ crown