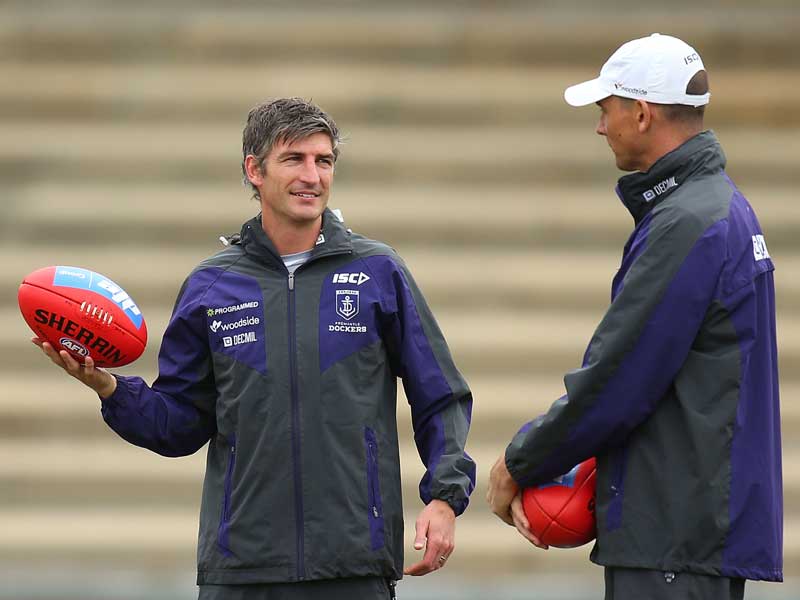 The two departing coaches are Brett Kirk, who will return to the Sydney Swans as a member of their coaching panel for 2016; and Simon Lloyd, who will become director of coaching at Geelong.

Kirk spent the past three years with the Dockers, who won this season’s minor premiership and went within a game of the grand final.

He started his playing career at the Swans in 1999 and went on to co-captain the club from 2006 until 2010, the year in which he retired.

Sydney’s general manager of football Tom Harley said the Swans are confident Kirk will be a valuable addition to their coaching group.

“Brett is a quality person and his impact as a leader during his playing career at the Swans is well known,” Harley said.

“We are still finalising our football department structure for 2016 and we will be able to communicate the specifics of Brett’s role, along with any other changes, once that process is completed in the coming weeks.”

Lloyd, meanwhile, will oversee the performance and development of coaches and the player development program at Geelong, in a newly developed role.

Lloyd spent six years at Fremantle, most recently as a senior development and assistant coach.

The Dockers won the 2015 AFL minor premiership and went within a game of the grand final, losing the prelim against Hawthorn on Friday night.

Geelong senior coach Chris Scott worked with Lloyd for two years at the Dockers and says the 45-year-old will be a great fit at the Cats.

“Simon has helped all the clubs he has worked with to improve and to lay the foundation for success,” Scott said.

“He is collaborative and understands all aspects of the game. He will be a great asset for the club and for all of our coaches.”

Geelong general manager of football Steve Hocking said they are excited to have Lloyd join their coaching structure.

“When we discovered his desire to return to Victoria we opened a dialogue and found common ground in Simon’s approach to the game and what the role could be, and our vision of those same things,” Hocking said.

“At that point I think it’s fair to say we were all excited about the possibilities that lay ahead.”

Lloyd has worked in the AFL industry for nearly two decades and is currently one of nine coaches completing the AFL’s level four senior coach program.