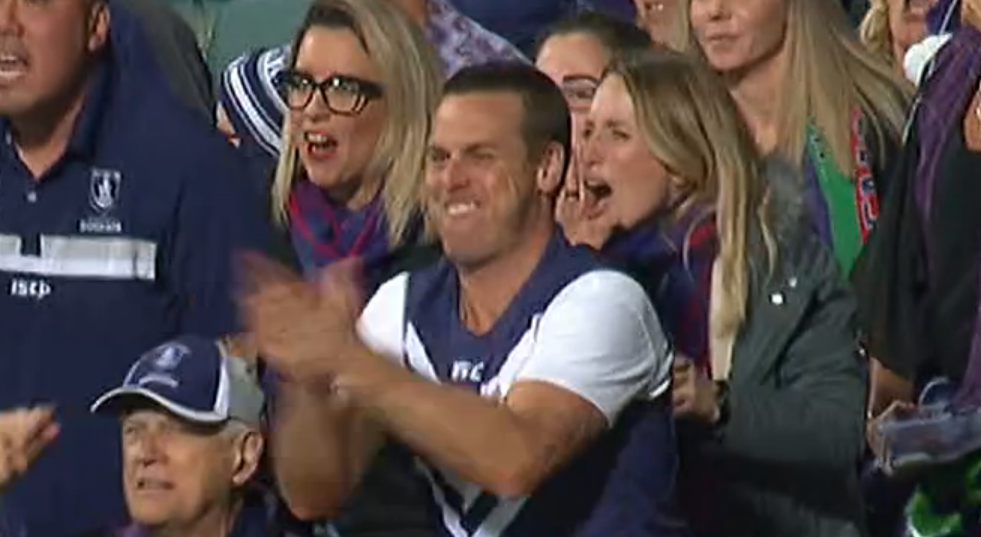 The behaviour of Fremantle supporters during their loss to Hawthorn on Friday night could force the AFL to rethink the measures used to controls volatile crowds.

In the first incident, a Fremantle supporter shaped to punch Hawthorn’s Isaac Smith as he tracked a ball over the boundary line. Smith shied away from the man, who was within striking distance.

Later in the match, Hawk Luke Breust was fended away and verbally abused by a man with an inflatable anchor after a hard collision with the fence.

• Angela Pippos: How sport can help conquer domestic violence
• Life ban for Fremantle supporter
• Hawks keen to get Eagles on home turf
• Hawthorn vs West Coast: we pick the winner

After the match footage emerged of another Dockers supporter allegedly striking a woman to the head. That matter is currently before the courts.

In video of the incident (watch it below), the alleged attacker is grabbed by other spectators as onlookers attempt to shield children from the violent outburst and usher them to safety.

The woman at the centre of the assault in the stands during the Fremantle-Hawthorn AFL finals clash at Subiaco Oval says she had to stand up to her assailant to protect her children.

Speaking to Triple M radio, a woman named ‘Sarah’, who identified herself as the person struck in the video, said her children were traumatised by the incident.

“My 13-year-old boy, who likes to think he is quite tough and brave, was shaking like a leaf. My eight-year-old step-daughter was just beside herself, inconsolable,” she said.

There were calls on social media to implement a crowd segregation policy, similar to that adopted in European football matches.

AFL CEO Gill McLachlan was appalled by what he saw, and while he stopped short of offering insights into the likely response, it seemed that measures to improve player protection would be considered.

“I didn’t like seeing fans leaning over the fence. We’ll have to work through those,” McLachlan said.

“The vast majority of fans were loud passionate and vocal.

“I think Western Australian football supporters generally would be very distressed by what they saw last night, I thought the reaction of people around demonstrated that.”

“You love playing there – it’s a hostile environment and you know the fans are really going to get behind them when they are kicking goals and we know that’s part of football,” he said.

“But you don’t want to see people leaning over the fence and touching the players.”

Both players and official agreed – the three incidents on Friday night were unacceptable.

Suggestions for managing the WA crowds included changing the dimensions of the oval to allow more space between the boundary and the fence.

Other changes on the table are a review of the alcohol policy, or large, cage-like fences like those seen at Indian cricket grounds.

They even caught the attention of the nation’s political leadership, with Opposition Leader Bill Shorten saying on Twitter: “For the out of line actions of this yobbo to come at a time we are having a national conversation about violence against women is shocking.”

“Any kind of violence, especially towards women, is unacceptable. It cannot and should not be tolerated,” he said.

The incidents came at the end of a season in which crowd behaviour has been headline news.

Indigenous Sydney player Adam Goodes has been victimised by racial booing around the country, and incidents involving the Fremantle fans were among the most unsavoury.

There has been an element of east-coast bias to some of the commentary – Goodes was booed wherever he played, but the backlash to the booing he received in the west was more intense.

Similarly, there has been much discussion about the unruly nature of WA footy supporters in the wake of Friday night’s match.

Some of these Fremantle supporters should be kicked out. Disgusting behavior raising your hand to threaten a player #AFLFreoHawks #idiot

Seriously are Fremantle supporters the most feral in the AFL? I trying to barrack for the Dockers, but it’s getting harder! #AFLDockersHawks — Sam Atwell (@AtwellSam) September 25, 2015

The Fremantle supporters are insane. And I’m a Collingwood supporter. #AFLFreoHawks

Fremantle supporters are an absolute disgrace, easy to be tough from other side of the fence #AFLFreoHawks #cowards — Brent Welch (@welchy05) September 25, 2015 Freo fans lose control. Should they be in a cage?