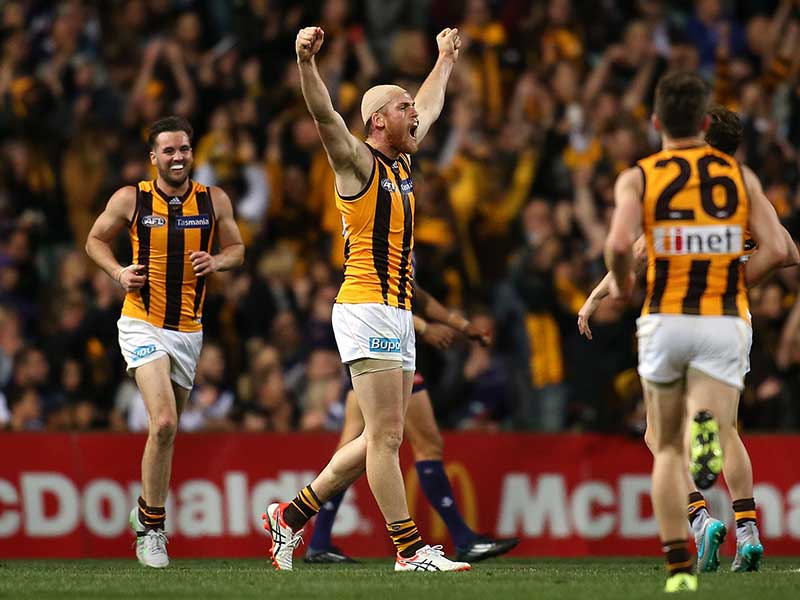 Outgoing captain Luke Hodge says "Rough" is the right man to lead the club in 2017.

Hawthorn’s quest for a premiership hat-trick remains alive after they beat Fremantle by 27 points in Friday night’s preliminary final at Domain Stadium.

Sam Mitchell starred through the midfield and Cyril Rioli booted two opportunistic goals in the final term to secure the 15.4 (94) to 10.7 (67) win.

The result ends any hopes of a western derby grand final, with Hawthorn to meet either West Coast or North Melbourne in the premiership decider.

• AFL star concussed in unprovoked attack
• Footy’s worst kept secret is out: Dangerfield on move
• Adam Goodes: the player of his generation

It also means Matthew Pavlich is set to bow out without a flag to his name.

Pavlich, a veteran of 335 games, is widely tipped to announce his retirement in the coming weeks, with injury-prone defender Luke McPharlin set to join him.

Star Fremantle midfielder Nat Fyfe was on the field for just one minute before re-injuring his troublesome left leg.

Fyfe then limped his way through the first half.

Although he moved better after the long break, his output was clearly impacted, finishing with 24 disposals.

His injury allowed Hawthorn to take control of the midfield battle.

Mitchell finished with 35 disposals, while Taylor Duryea was also crucial, with his pin-point kicking setting up numerous attacking opportunities.

But it was the Rioli show when the game was there to be won in the final quarter.

With his side leading by just nine points and looking vulnerable, Rioli swooped on a loose ball and kicked truly after young Docker Tom Sheridan dropped a sitter.

Then when Cameron Sutcliffe’s dangerous kick across goal was spoiled, Rioli was on hand again to snap his second.

The double blow broke Fremantle’s spirit, with goals to Duryea and Jarryd Roughead shortly after killing the contest.

Hawthorn skipper Luke Hodge suffered a big head knock midway through the final term, but he was able to return to the field.

Fremantle made a dream start to the match with two quick goals – and that was before Fyfe had even stepped out onto the field.

Fyfe, nursing inflammation in his left leg, received a huge cheer when he trotted out at the four-minute mark.

But disaster struck just one minute later when Fyfe’s legs got in the way of a rampaging Brian Lake.

He was clearly hurt by the collision and he spent the rest of the quarter limping from contest to contest at half pace.

It took almost 20 minutes for Fyfe to tally his first disposal. In the meantime, Hawthorn wrested momentum away from Fremantle to enter the first break with a handy 19-point lead.

Goalsneak Hayden Ballantyne, whose off-the-ball bump cost the Dockers a goal, was on the receiving end of a big spray. Michael Johnson also copped a bake.

And with Fyfe horribly out of sorts and battling along on one leg, it seemed Hawthorn would race away.

But the Dockers stuck to the task to work their way back into the contest.

Fyfe eventually came good with 11 disposals in the second term, helping trim the deficit to 16 points at half-time.

Fremantle looked gone when Hawthorn skipped out to a 28-point lead, but the margin was reduced to 11 when ruckman Jon Griffin unleashed a 55m bomb late in the third term.

Hawthorn too tough for Fremantle in the west