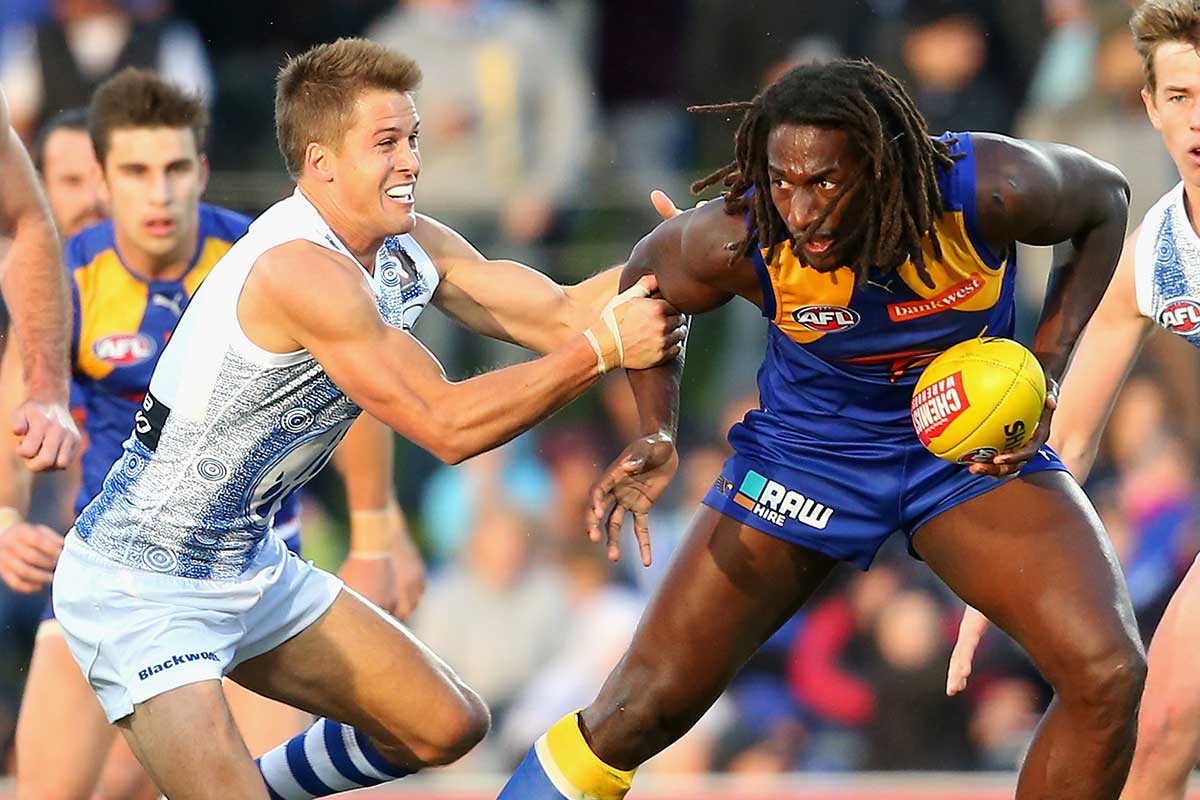 Greig Johnston and Will Evans

The first of the AFL and NRL preliminary finals are done and dusted, with Hawthorn and the Broncos winning their way into the Grand Finals on Friday.

Hawthorn outlasted a gallant Fremantle by 27 points in Perth, while the Broncos took a 31-12 win over the Roosters at Suncorp Stadium.

Now Greig Johnston and Will Evans weigh in with their previews for Saturday night’s big games, and tell us how the Grand Finals will look.

West Coast are overwhelming favourites when they take on North Melbourne at Domain Stadium on Saturday night.

But that won’t faze North, who won the only meeting between the two sides this year by 10 points on a blustery day down in Hobart.

Todd Goldstein proved he was kryptonite to Eagles ruckman Nic Naitanui that day, amassing 47 hitouts to 30 and enjoying a big last quarter to help the Kangaroos get home.

Naitanui’s deputy Callum Sinclair had a day to forget in that Round 10 clash, and if the Eagles are to get up they’ll need their back-up ruck to fire.

North are coming off an impressive win against Sydney last weekend, and veterans Jarrad Waite and Brent Harvey have been in irresistible form this September.

But the Eagles will field one of their strongest sides for the season, with Matt Priddis and Chris Masten returning after respective quad and hamstring complaints.

If North can break even in the midfield, expect the three-pronged attack of Waite, Drew Petrie and Ben Brown to give West Coast headaches all night long.

The Eagles will be hoping Petrie’s knee fails to get the all clear, just to lessen the load on Will Schofield and Jeremy McGovern.

Of course, Josh Kennedy and Jack Darling present no small problem of their own for North’s defenders, and the availability of Robbie Tarrant – who was a late withdrawal last weekend with a groin issue – is key.

Saturday’s preliminary pits the mercurial Johnathan Thurston and his band of destiny-chasing Cowboys against the dominant club of the NRL’s last decade, the relentless Melbourne Storm.

The Cowboys’ recent history is peppered with finals heartbreak, and they head into their first prelim since 2007. The Storm, meanwhile, have been here six times in the past nine seasons, winning on five occasions.

North Queensland can’t afford to get lured into an arm-wrestle with Melbourne – that happened at AAMI Park in Round 25 and the Storm grinded out a high-quality 14-6 win. The hosts will again rely on their defensive patterns, ruck control and clinical attack to graft their way towards victory.

The halfback duel between Origin and Test comrades Thurston and Cooper Cronk is almost certain to decide the outcome. JT’s tenacity and peerless ability to unlock the tightest of defences is crucial to the up-tempo game the Cowboys must play. Cronk, the master technician, will ensure the Storm stick to their strategy of suffocation, nullifying his rival No.7’s influence in the process.

The Cowboys’ travelling woes have crept back in over the past couple of months, which could be a telling factor at a sold out AAMI Park – but they were near-perfect in a 39-0 defeat of Cronulla seven days ago, while the week off may have stunted the Storm’s momentum.

Expect a performance of a lifetime from Thurston to get his side over the line.

Think you can out-tip our experts? Leave your tips in the comment section below!

We have one grand finalist – we tell you the other