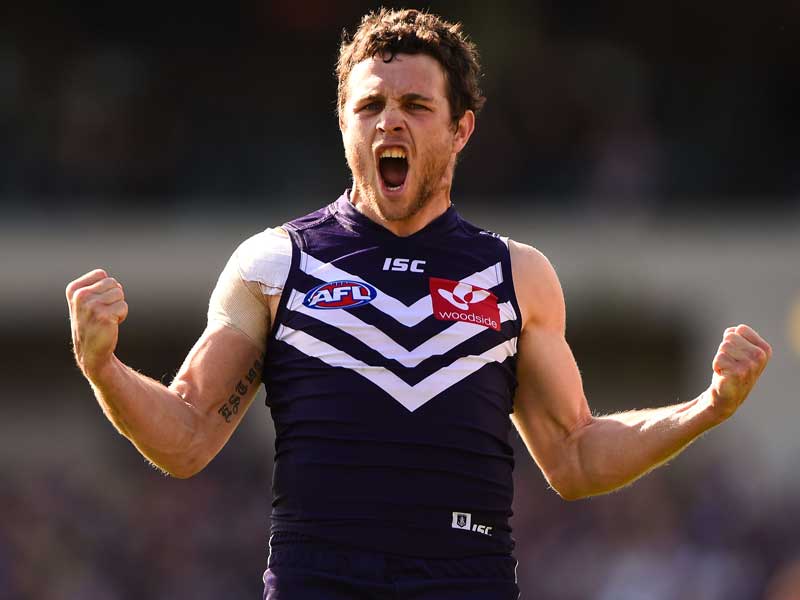 Fremantle is not getting the respect it deserves.

Of course, it will take a monumental effort from Ross Lyon’s team to hold off relentless Hawthorn at Subiaco in the preliminary final.

But the Dockers are capable of it.

It’s just that hardly anyone seems to think so. Hearing the debate, you would think that the Dockers fell into the finals.

In fact, they finished on top of the ladder, a game clear, and won their qualifying final at home.

Yet they are third favorite for the flag with bookmakers. People don’t trust them, fundamentally. They are the unloved team at the top.

To beat Hawthorn, they cannot play “circle work” as Lyon described Adelaide’s semi-final against the Hawks so memorably last week. It’s not Fremantle’s style anyway, so don’t expect a shootout at Subiaco. It will be dour and it will be a grind, like a final usually would be.

Fremantle need to take Hawthorn away from what they want to do, which is to make crisp kicks to each other, retain possession and find a clinical way to the goals. The Dockers need to bring incredible defensive heat and they need to disrupt Hawthorn. West Coast did it and beat the Hawks a fortnight ago; there is the template.

Secondly Fremantle needs to withstand Hawthorn’s defensive pressure, which is elite, too. People underestimate the Hawks’ ability to monster the opposition in tight; it is worth noting that Hawthorn was the No. 1 ranked defensive team in 2015, pipping Fremantle in the final round for that mantle.

Moreover the Dockers need to get out and run when they have the football, and they need to look to score. They average 12 goals (a poorly 11th in the competition for scoring) and they are hardly ever beaten when they kick that many; against Hawthorn, they probably need, say, 14.

The issue for Lyon is that in finals, his teams have often been dried up, managing just eight or nine. And it requires an amazing defensive effort to win a game with that few goals. It certainly won’t win against Hawthorn, a team that averages 17 a game.

Although most of these points have been ignored in the lead-up, there are a few things in the favor of the Purple Haze. One is that the game is at Subiaco, 20 metres narrower than the MCG, where Hawthorn is nigh-on unbeatable. The skinny ground is perfect for the zone presses that Fremantle (and West Coast) deploy. This is why Al Clarkson had someone paint the lines in closer at training this week, for Subiaco is unique and Clarkson knows his team has not played as well there.

Hawthorn has won just two of the past five games at Subiaco and this uniqueness is likely a reason; that the pressing teams are able to disrupt the Hawks’ ball movement with a little more effect than they can on the almost-round MCG.

The crowd will be worth about two goals to Fremantle, too, for they will be loud and unfriendly.

Finally, Fremantle is well rested thanks to the qualifying final win over Sydney and Lyon’s decision to leave out a bunch of players in round 23. By contrast Hawthorn is heading to Perth for the second time in three weeks. There are no myths surrounding the difficulty of cross-continent time travel. This is a tough ask for the mighty Hawks.

Overall there are reasons for Fremantle to be optimistic. It’s just that outside the confines of the club, they are not being seen. Hawthorn is a magnificent football club and it has a team that will likely win if it plays its best footy. The task for Fremantle is to take the men in brown and gold out of their comfort zone.

But I can see an all WA final at the MCG looming. Why Fremantle deserve your respect