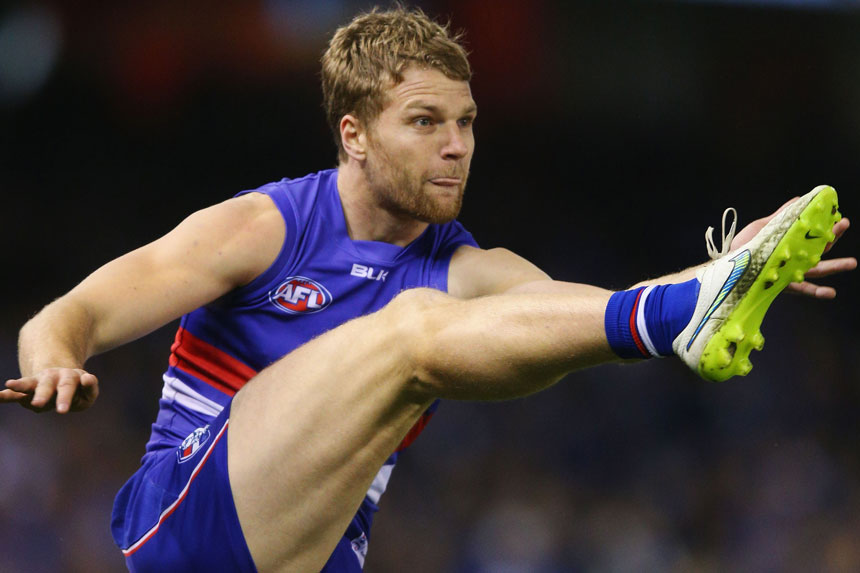 Is this make-or-break for Hawthorn?

Quite possibly it is. That’s how big the Friday night qualifying final in Perth is.

If Hawthorn cannot get over West Coast at Subiaco, Alastair Clarkson’s team will come back to Melbourne next week for a knockout final at the MCG against either Adelaide or the Western Bulldogs. Then beyond that, it could be a trip back to Perth to play Fremantle in a preliminary final.

These are seriously hard yards, even for a group as resilient as Hawthorn.

The Eagles will assume premiership favouritism if they win. But that is not a given.

• ‘My heart is with my man’: Jesinta Campbell
• Buddy revelation has ‘moved the goalposts’ on mental illness
• Even poor AFL clubs can enjoy finals glory

How to deal with the NicNat effect?

Nic Naitanui is running hot. And for all the three premierships under Clarkson, Hawthorn has never had dominating ruckmen.

Naitanui is a concern with his brilliant hands, always up over the top of the opposing ruckman, and with his connection with the Eagles’ on-ballers.

West Coast like to get the ball forward from centre bounces and then lock it in. Naitanui is a strong part of this.

Hawthorn has Ben McEvoy and David Hale, two competent ruckmen, but neither will get near Naitanui’s hand at the centre bounces. I would pick Jon Ceglar, who is a fraction bigger, on a horses-for-courses basis.

But Hawthorn has confronted this quandary before. Generally it uses its stoppage players to interrupt the patterns of the opposing ruckmen by running to his hit zones, as they did to Aaron Sandilands in the 2013 Grand Final.

Often they win the clearance count anyway using that method.

No love for Fremantle?

It’s largely a mystery. I can’t recall a team that won the minor premiership that was so lowly rated externally, especially when you consider that they will likely remain in Perth until Grand Final week, should they get that far.

Perhaps it is Ross Lyon’s previous failures to win flags from close range that influence people, and the widespread dislike for his playing style – dour and relentless and low-scoring.

Personally, I have never written off the Dockers. Yes, there is a doubt about their ability to kick a winning score (they were 11th in scoring this season). They can freeze up in big games. But they will be enormously difficult to beat. That is the Dockers’ trademark.

Is Buddy Franklin’s absence a deal breaker for the Swans?

Ironically, Sydney has played better in the past six weeks in a time when Buddy has missed games and been subdued in others. In the five games he missed this season, the Swans are 3-2.

Kurt Tippett seems to thrive when he is not there, and possibly Sam Reid too. The reality is that structurally, it is the absence of Luke Parker and Kieren Jack that hurts more, because Sydney has tall forwards to cover for Franklin, but its midfield depth has been diluted.

In the overall scheme, Sydney has a cluster of injuries that will surely end its hopes, and Franklin is merely another body blow.

Are the Bulldogs just Etihad bullies?

This was a big call by the AFL to hold this final against Adelaide at the MCG, but if people are basing their criticism on the fact the league took a final to Geelong two years ago, then they are falling for the two wrongs don’t make a right syndrome.

Geelong’s stadium was not ready to host a final then, and it was wrong to take it there. In this case, a crowd of 60,000 or so would justify Gillon McLachlan’s decision to play it at the MCG this Saturday night.

The Dogs are 11-2 at Etihad but they also have won at the SCG, for instance, so they are no myth. I can’t wait to see Jake Stringer, Marcus Bontempelli and company play a big final at the ‘G’.

Either way, there will be a fairytale alive after this match. Adelaide’s players have been extraordinary in the face of grief and real tragedy.

Will Damien Hardwick be in trouble if Richmond loses another first-up final?

He should not be. Hardwick has done a fine job with Richmond, which has continued to improve into his sixth year, just missing the top-four this season.

But football is a highly emotional game, and of course another quick exit would lead to a spirited debate.

In my opinion, the emotion has to be stripped out. You never make a decision based on one game. In any case, I think Richmond can win its first final since 2001.

Will Brad Scott be vindicated for resting his North Melbourne players?

Scott did what his club needed him to do when he left out half his team in round 23. The Kangaroos will be well-rested and prepared for the elimination final against the Tigers.

But are they good enough?

The Roos finished eighth for a reason; the absence of Daniel Wells and Nick Dal Santo for much of the season left Scott too short of classy, outside run to match the wealth of inside grunt.

North does not defend well enough. It is 12th on the defensive rankings, and I have not seen too many premiership teams so low on that table.

I fancy Hawthorn with its edge in experience and big-game savvy against a West Coast team that might well be nervous.

Fremantle should go through over a battle-weary Sydney, the Bulldogs will outrun Adelaide in a cracker and Richmond should keep the wolves from the door by knocking out North Melbourne. Key questions for the first week of the AFL finals