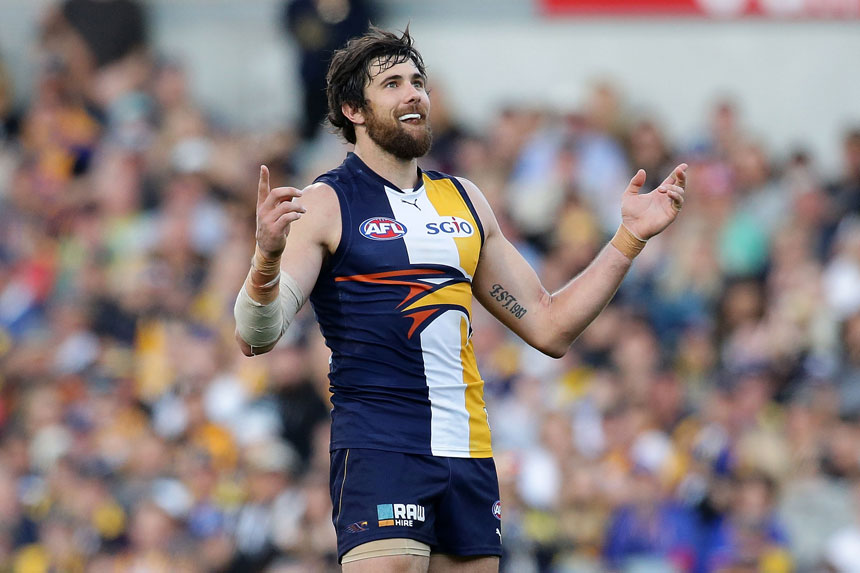 Picking an all-Australian side is fraught with danger, and often it’s judged externally by who is left out, rather than who is in.

Ultimately, you put your team out and wait for the barbs to come. So, here is mine.

In 2015, the rise of the West Coast Eagles and Western Bulldogs is reflected in my team, with each having three members of the 22.

But the question that jumped out at me as I pondered over the selection table was this: where have all the centre half-forwards gone?

It was by far the toughest position to nail, marginally ahead of full-back.

There is never any trouble finding high quality midfielders, and this year there were plenty of small and medium-sized forwards putting their hands up, along with the biggest certainty of all, Eagle Josh Kennedy, who has been hands down the best tall forward in the competition.

Lance Franklin owned the spot last year, but injuries have cut him down in 2015.

He has been okay for the Swans, but on all-Australian level? I don’t think so.

Travis Cloke has been so-so for Collingwood and while Nick Riewoldt has had another good year, I did not see it as a great year for the Saints.

Ultimately, I went for Jeremy Cameron of the Greater Western Sydney Giants on the back of 54 goals in a team that will not play finals.

I acknowledge that he is a little lucky, and that it has hardly been a stellar year.

But as you find out when you are picking all-Australian teams, there are always one or two positions where it is hard to find the right guy.

After all, the all-Australian is meant to be a team of men who had great seasons, not necessarily great careers as such.

Full-back was a quandary.

The likes of Jeremy McGovern of West Coast had claims and Sean Dempster of St Kilda is a vastly underrated shut-down man who I looked at closely.

Ultimately, I stuck with Essendon’s Michael Hurley, an attacking defender who had his breakout season as the club crumbled around him. Again, it is open for debate.

The remaining defenders all earned their way, with the breathtaking Bulldogs grabbing two spots for veteran Bob Murphy and Easton Wood, about the best contested-mark man in the league.

Heath Shaw had a career-best year for the Giants and pipped Rory Laird of Adelaide for a back pocket.

Luke Hodge sweeps across half-back and leads the team; the veteran had one of his best seasons and must be there in 2015.

Alex Rance of Richmond stands in the middle of this defence and there can be no other centre half-back.

I believe he could be in the top 10 players in the competition as of now.

What a bonus to have a player who can go to the opposition’s best forward (Franklin, Cloke et al) and mow him down as well as providing strong run and carry from the back half.

I chose two ruckmen this year simply because there were a cluster who earned it, headed by North Melbourne’s Todd Goldstein and Fremantle’s Aaron Sandilands.

West Coast’s Nic Naitanui, whose raw statistics don’t reflect his influence, was the unlucky one who missed.

Small forwards were plentiful but I stuck with Eddie Betts of Adelaide and also included Cyril Rioli, Hawthorn’s precious jewel, on the bench.

Rioli did not have the goals of, say, Luke Breust, but his influence on games is not strictly measured by that.

He is perhaps the best player without the football in the competition and he had a great year.

I can’t pick an all-Australian team without Chad Wingard of Port Adelaide and Jake Stringer of the Bulldogs, young players with amazing talent and skill. Both had fabulous seasons.

I left one forward pocket open for a spare midfielder who can hit the scoreboard as well and it was a tricky spot.

Patrick Dangerfield of Adelaide was a candidate but my choice was Brett Deledio, who has such an influence for Richmond as a mid-forward.

Deledio missed a few games early and hence, his selection can be queried, but I believe he has more to do with Richmond’s rise than anyone.

Finally, the midfielders included a few who chose themselves — Nathan Fyfe, who is the best player in the competition, and Matthew Priddis of West Coast, his biggest threat on Brownlow Medal night and another beast at stoppages.

Bernie Vince of Melbourne beat too many of the league’s best players head-to-head to leave him out, and Andrew Gaff of West Coast, whom I have on a wing, had his watershed season.

I threw in Sam Mitchell, Hawthorn’s ageless warrior, and Dustin Martin of Richmond, arguably the best one-on-one player around, to make up the mix but it could just as easily have been Sydney’s Josh Kennedy for grunt, or Collingwood skipper Scott Pendlebury for class, not to mention Port’s Robbie Gray, who followed his stellar 2014 with a very good 2015.

So here it is. Let the argument begin.