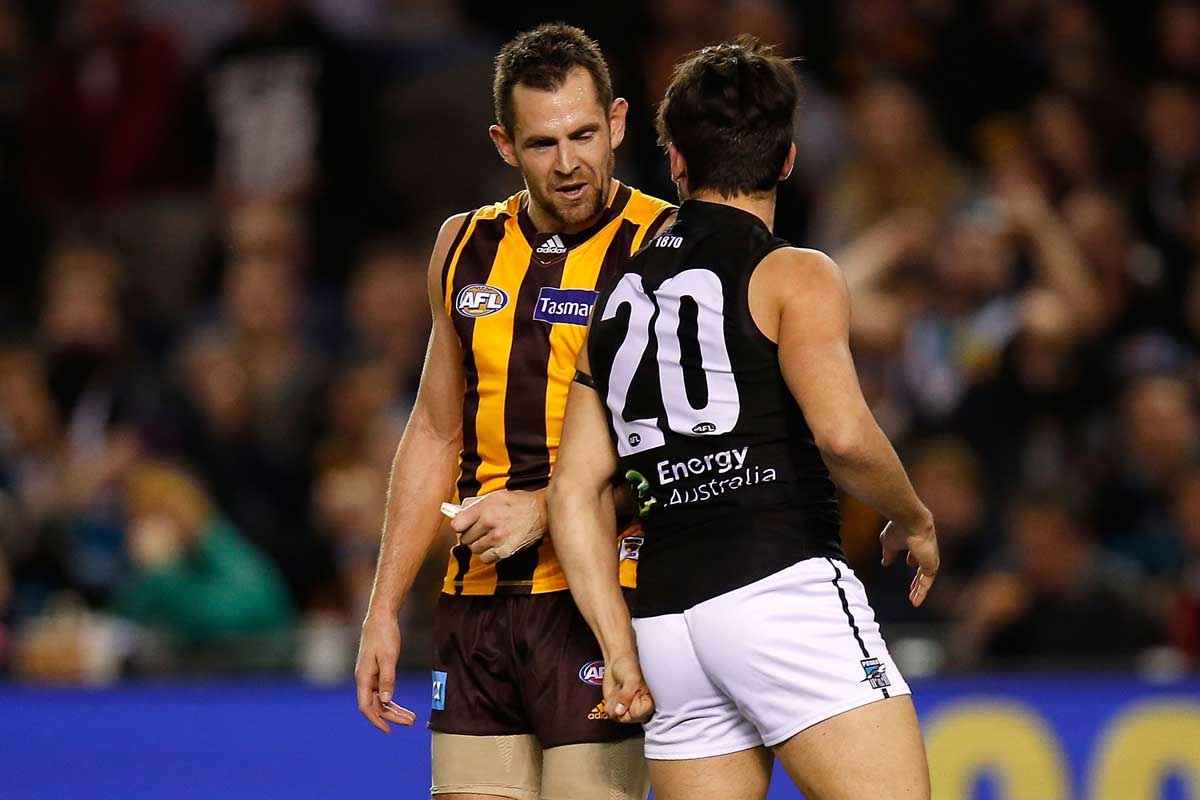 Discipline is a hallmark of great sides and great players.

Which is why the reports laid on Nat Fyfe and Luke Hodge over the weekend are so disappointing.

Both men are, without question in Fyfe’s case, the most important cog in their side’s premiership quests this season.

Fyfe’s report for a reckless, clumsy bump on North Melbourne’s Ben Jacobs is the latest in a long line of little incidents involving the Dockers star.

He is not a dirty player, or a sniper (although his hit on Jordan Lewis last season certainly raised some eyebrows).

Rather, he’s just a little irresponsible – he puts himself in situations a player of his class should be able to avoid.

Hodge, on the other hand, looked full of malevolent intent when he bumped Chad Wingard in the head.

The Hawthorn skipper has some pretty ordinary form already this season, for a crude elbow to the head of Andrew Swallow.

He could be looking at a potential three-game ban for the Wingard hit, meaning he would miss his side’s first final – almost certainly a trip to WA.

It’s precisely the kind of journey his team will need all hands on deck for, and if the skipper misses he’ll have let Hawthorn down twice this season in a big way.

The Eagles may be the least-hyped side ever to have only lost four games to Round 21. But still it’s tough to find anyone who thinks they can win the flag.

Their 77-point drubbing of the Dogs on Sunday was probably more impressive for who wasn’t playing.

Already without Eric Mackenzie and Mitch Brown, the Eagles went in minus Jeremy McGovern and Will Schofield.

That meant the Eagles’ ragtag defence had Shannon Hurn named at full-back and Sharrod Wellingham at centre half-back.

Yet, as they’ve done all year, the Eagles did the business. Jamie Bennell impressed off half-back, while Brad Sheppard and Jackson Nelson played their parts.

West Coast are starting to have the look of a side that believes it will win every time it takes to the park.

It needs only to win one of its final two matches to secure a top-two spot, and should it get past its opponent in week one (likely to be Hawthorn), look out.

Freo on the fritz

Sunday’s loss to North Melbourne was the second on the trot for the Dockers, and supporters must be wondering what happened to the footy their club was producing earlier in the year.

You’d expect to see a more switched-on Dockers once spring arrives, but for now Ross Lyon has his hands full keeping confidence up.

Collingwood and GWS turn up their toes

Heading into the weekend, both Collingwood and the Giants still had mathematical chances of playing finals.

Which makes it confounding as to why they chose this weekend to put in their worst performances of the season.

Collingwood were tuned up by 91 points by Richmond at the MCG, while GWS copped it sweet from their Bridge Battle rivals the Swans, going down by 89.

Both sides have shown a bit in 2015 to offer supporters signs that the next few years will be very exciting indeed.

But they showed precious little on Saturday.

And the dead rubber award goes to … Port Adelaide

Just like the Aussie cricketers are doing at The Oval, Port Adelaide waited until it was too late to produce their best effort for the year.

Port proved their game plan is kryptonite to Hawthorn, who they have beaten twice this season.

At their best, the Power are a joy to behold. September will be poorer for their absence, and they only have themselves to blame. Why Fyfe and Hodge need to pull their heads in