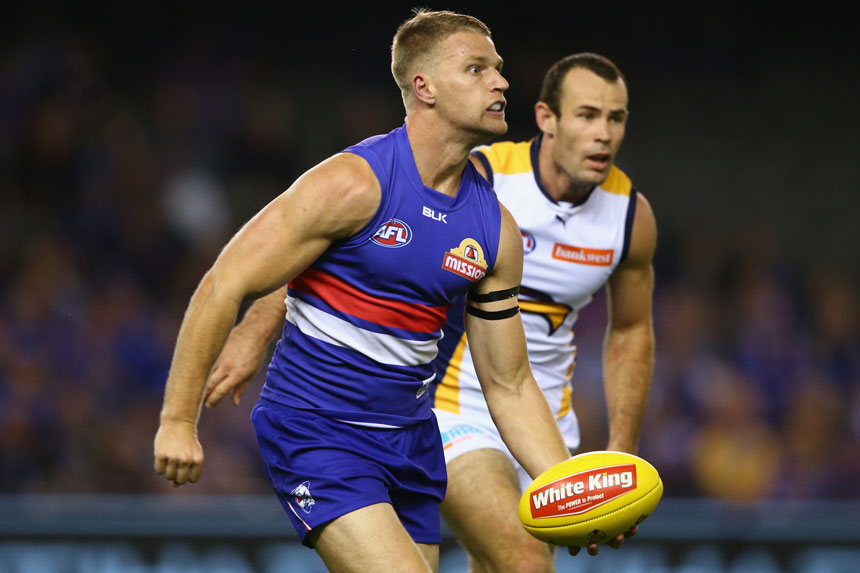 We’ve all been force-fed peptides and ASADA and WADA and Essendon and Dr Ageless for too long. There are brighter stories out there.

One is on display this Sunday at Domain Stadium.

The Western Bulldogs and West Coast Eagles are the antidote to Essendon fatigue.

• James Hird: controversial, determined and downright classy
• The Essendon disaster movie is crying out for a hero
• Why the most important Derby was meaningless

They play football that takes your breath away, footy in permanent fast-forward, and as it happens, they are both coached by Clarkson School graduates in Luke Beveridge and Adam Simpson.

We all know how attractive Hawthorn has been to watch under Alastair Clarkson’s reign; here are the products of the proteges.

The Bulldogs and the Eagles play the quintessential modern game.

They crack in when the ball is in dispute or tackle and harass when they do not have the football.

And when the Sherrin finds its way to them, they spread like wildfire carrying the ball.

They look to score heavily, as Hawthorn does.

It is compelling – especially in an era when people are quick to criticise the way that the game is played.

Plainly, those people have not seen enough of the Dogs and the Eagles play.

Last week, West Coast rained down seven goals in the first quarter against Fremantle, taking the game away from the Dockers.

The Bulldogs went one better with eight majors in a frenetic first quarter against Melbourne.

You come to play when you are up against these teams or they will destroy you early.

That’s what makes Sunday so appealing, that it is the clash of two fierce running teams and with so much riding on it.

For the Bulldogs, it is about holding a top-four spot that would have been thought utterly fanciful late last year when the coach (Brendan McCartney) and the captain (Ryan Griffen) had gone.

For West Coast, it is about holding on to a top-two position that would grant Simpson’s team not only a double chance but a home final at Domain Stadium.

In particular, the Bulldogs are the story of the season.

It is only a few months ago that president Peter Gordon was being hammered for what was perceived as an overly optimistic summation of the club’s position, having lost the coach, captain and chief executive and having taken a monumental risk in paying a million dollars a season for Tom Boyd, a young man with just a handful of games’ experience.

Yet Beveridge has, at his disposal, one of the best young lists in the competition, a group that has been cobbled together in the downturn after consecutive preliminary final appearances from 2008-2010.

Ironically, Boyd is whiling away in the reserves and not required, for Beveridge has shown no compunction about dropping players for poor form.

Dynamic forward Jake Stringer, now commonly known as ‘The Package’, is emblematic of his club.

Last week against Melbourne, Stringer found himself trapped out on the wing against two Demons but still found a way to bowl one over, win the football and force it forward, creating a goal.

A lot of what Stringer does is Ablettesque, and by that we mean Gary Ablett senior, which is quite a statement.

Then there is ‘The Bont’, Marcus Bontempelli, an astonishing talent who has quickly won a legion of admirers with his calmness at the furnace, his refusal to lose his balance and his clean hands.

Under Beveridge, a host of Bulldogs have had career-best seasons, such as Easton Wood and Liam Picken, for example, and this is the mark of a very fine coach.

Well, nobody has risen so far in a season in VFL-AFL history, so that suggests they cannot.

The closest was Adelaide from 1996 to 1997, when the Crows soared from 12th to a premiership under Malcolm Blight.

Another comparison is Kevin Sheedy’s so-called Baby Bombers in 1993, who came from eighth the previous year to win the premiership.

This is the kind of territory Beveridge and his men are walking in.

As for the Eagles, they undoubtedly have a chance so long as they can hold that top-two position and reinstall Nic Naitanui and his unique brand of high-leaping and deft centre-bounce ruckwork to the team.

Simpson has his team second in scoring and third in defence, and these are the numbers of a very good football team.

Premiership worthy? Well fairytales don’t often bob up in sport, and the Bulldogs in particular would qualify as such.

Right now, the game could do with a little romance.

How the Eagles, Dogs rose above the AFL gloom