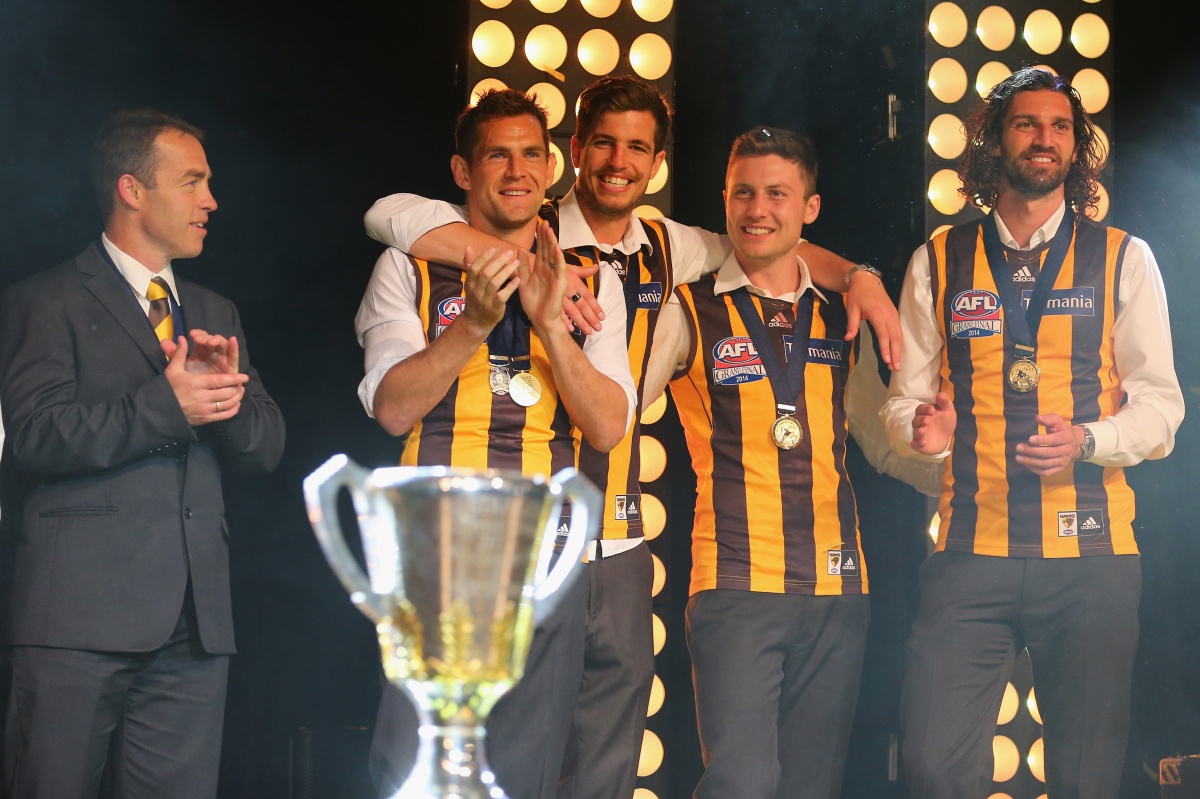 In the next seven weeks, we will find out what Hawthorn truly is made of.

Win a third consecutive AFL flag and the Hawks will draw the ultimate compliment, that of comparison with the club’s greatest teams. Of course, it is easier said than done.

What would it mean for Hawthorn if Alastair Clarkson’s team did the three-peat? I believe they would earn the right to sit alongside the 1983-1991 vintage with its Breretons and Dunstalls and Plattens and Buckenaras and Tucks and Ayres.

• Western Front the only thing that can stop Hawks
• The funny fallout to 2015’s dumbest footy comment
• Grant Thomas: the AFL is killing poorer clubs
• The night Jonathan Brown nearly died at 21

The fact is, for all the greatness of those past Hawthorn teams, none could win three on the trot. They are in heady territory, Clarko’s men.

A friend and I once sat down and tried to assess some of Hawthorn’s awesome 1980s teams using the salary cap, just for a laugh. We gave the players current-day salaries on their abilities, and totalled them up, starting with a million bucks each for Messrs Dermott Brereton and Jason Dunstall, and similar numbers for the likes of John Platten, Gary Buckenara, Chris Langford, Gary Ayres and Chris Mew.

Skipper Michael Tuck would not have come cheaply, nor would Robert DiPierdomenico, John Kennedy junior or Andy Collins, Darrin Pritchard and company.

By the time we counted it up, we were above the $15 million mark. And we had not even factored in the remaining 20-odd players on our imaginary club’s list!

The 2015 salary cap is just more than $10 million, meaning that Clarkson and his list management team have to squeeze their group in under that figure.

The 1988-89 team would come in around double those salary cap figures.

The point being that those 1980s teams had more superstars than the current list, which has Luke Hodge, Jarryd Roughead, Sam Mitchell and Shaun Burgoyne in the Hall of Fame class.

They are closely followed by the likes of Jordan Lewis, Cyril Rioli and Brian Lake.

Beyond that, the cap kicked in and the list began to break up, with Brereton as the symbolic departee.

The great man went off to Sydney in a huff, and then to Collingwood. Tuck was forced into retirement and the club went into a spiral that almost sent it into a merger with Melbourne in 1996.

These were amazing teams, winners of five premierships from 1983 to 1991, but you could never put together a list of such talent in the modern era.

Yet there is more to it than that. Clarkson’s teams have been amazingly even, not suffering for any weak links in the chain.

Role players like Paul Puopolo and Liam Shiels have ended up blossoming into fine performers in an environment that fosters improvement. And factors like Clarkson’s innovative coaching and Hawthorn’s renowned team-first culture are worth putting into the equation, too.

That Hawthorn is contending again in that socialist world of equalisation is a truly remarkable feat. Only five teams in history, headed by Collingwood’s remarkable four on the trot from 1927-30, have won three in a row, most recently the Brisbane Lions from 2001-2003.

That’s the context in which to view Hawthorn’s tilt at another flag in 2015. If Clarkson and his team can do it, watch for the comparisons with the 1980s to come.

When really, the fact they could be mentioned in the same breath is enough.

Hawks have a golden chance to sit with the immortals