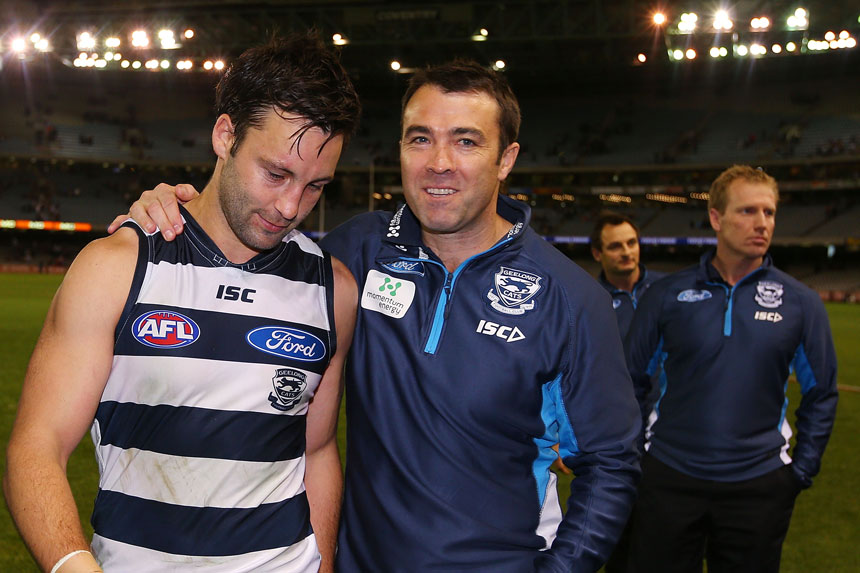 They might be in the top eight, but The Cats cannot win the flag in 2015.

But that’s not relevant, except in the broader scheme of things, because coach Chris Scott is building another team to make a thrust at a later date.

That team will be led by the likes of Steve Motlop (if they can hold him), Cam Guthrie and company. It’s a new Geelong that he’s cobbling together, skilfully and clinically.

All of which raises the question of the older players and legends that Scott has to make a call on at the end of the season, in particular four: Steve Johnson, Corey Enright, Jimmy Bartel and James Kelly.

They’re all triple premiership winners and club icons, but if Geelong needs salary cap room to make way for free agent Patrick Dangerfield, and if it needs to keep the prying opposition clubs from the brilliant, uncontracted Motlop, it is easy to see how difficult the decisions become.

Wickedly so. Scott has already been through it with Matthew Scarlett and with Paul Chapman, who went to Essendon.

Soon enough, he will have to think about Andrew Mackie, too.

It is part of the job description, but never easy for anyone, least of all the coach.

Already, he has made it clear that club comes first.

“We love them, we all do, but we love the club just a little bit more and we have to make sure we do the right thing,” said Scott.

I have no doubt that all four could go on and play decent football.

But whether they could be part of another Geelong premiership is highly questionable at their ages.

Dangerfield, on the other hand, could elevate Geelong and the club can’t afford to lose a player like Motlop, in whom they have invested so much.

I suspect 33-year-old Enright, the quiet one from Kimba, will retire of his own accord.

But we are not talking SuperCoach, here.

We are talking club legends, and I doubt Scott will go as hard as, say, Michael Voss did at Brisbane, sending Daniel Bradshaw into the trade market and losing a friend in the process.

As Kevin Sheedy learned way back in the 1980s, you move out highly popular players and everyone gets very scared.

The maverick Johnson punched a former team-mate this week and copped a week’s suspension that will defer the celebrations for his 250th game.

It is part of the quirks of this genius of a player that although he is anything but a malicious person, he is constantly reported for niggling little incidents, just as it is mystifying how he can miss a set shot at goal from 25 metres with zero difficulty yet he has created his own genre of snap kicking around the body.

Johnson is also a warrior.

The story of how he got up to play the 2011 Grand Final after dislocating his knee cap in the preliminary final seven days earlier has gone into the annals.

Scott and Johnson have told the story of the coach wandering down the corridor at the team hotel in Melbourne the night before the Grand Final, knowing that he was about to make the call on Johnson, who’d had injections even to train during the week.

His injury, sustained at any other time, would have lost six weeks for him.

When Scott knocked on Johnson’s door, the player had to act quickly.

“I had this blow-up ice thing on my knee and I just whipped that straight off and quickly hid it in the corner and answered the door,” he said.

Johnson told Scott he was ready to play against Collingwood. He kicked four goals, including the sealer late.

Tom Hawkins, who dominated the final from centre half-forward, actually handed Johnson one literally in the third quarter, having suffered some nerves in front of goal. “Kick a snap,” said Johnson. “You kick it, Stevie,” replied Hawkins.

We are talking about hall of famers, here, and hopefully these great Geelong men are realistic in their own assessments as the decisions are made, for the ending is only part of a far more colourful story.

In rock music, you just reform the band, as Cold Chisel is doing later this year. But in footy, they might have to consider the band’s words:

When the war is over, got to get away.

Packed my bags to no place in no time, no day.