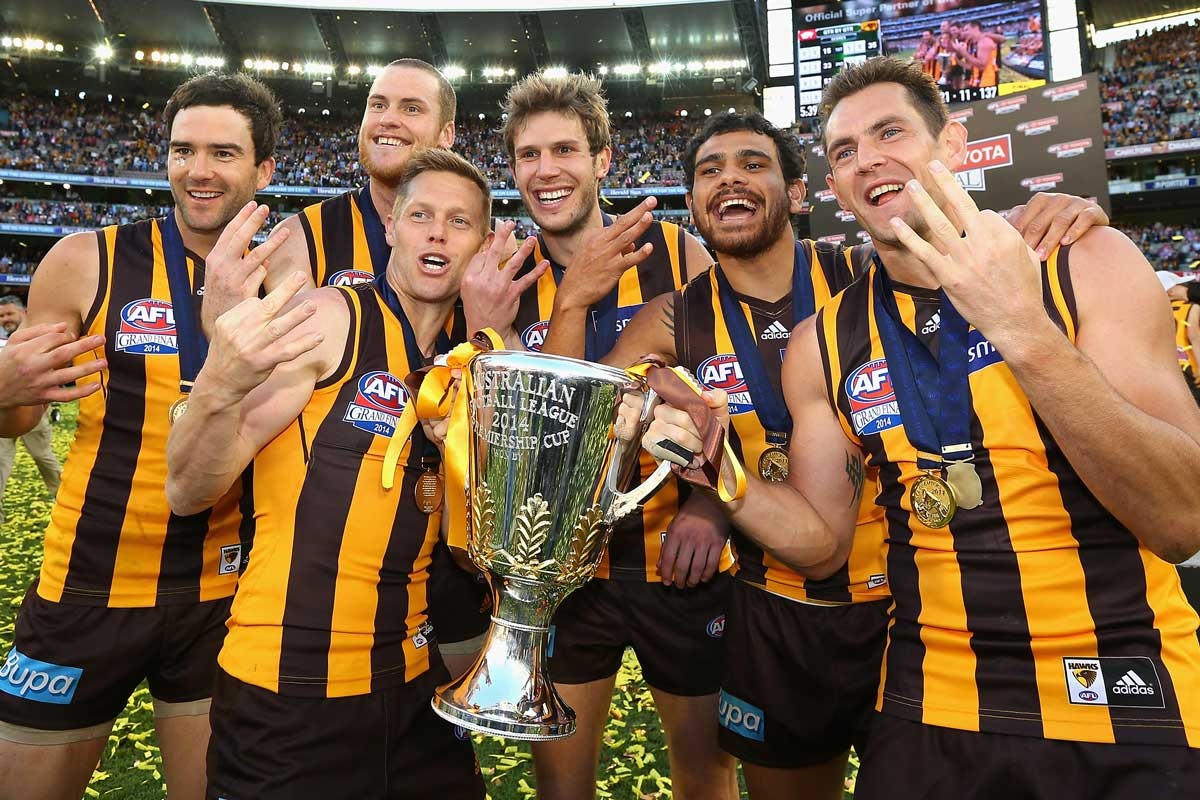 The good news for the contenders is that there is a way to beat Hawthorn and win the AFL flag. The bad news is that it will take a near-miracle.

In a week, second-placed West Coast hosts Hawthorn at Subiaco in what will be dressed up as the potential Grand Final prelude. But it’s more than that. It could be the game that sets up the season.

Here’s how the two Perth teams, in particular, can slay the giant. It’s a stretch, but it’s worth pondering.

Hawthorn (12-4) is third on the ladder right now, a game behind the Eagles and two games behind Fremantle, the ladder leader. Hawthorn’s whopping percentage of 170, one of the highest figures ever and built up over the past month of pillaging, is a factor, too.

The two Perth teams shape as the only hopes of stopping a Hawthorn three-peat, but here’s their problem: to do it, they will likely have to come to the MCG and beat the Hawks.

I doubt either is quite good enough to do that. Hawthorn is virtually unstoppable at the home of the game, and it would be a huge advantage to play a team from the western seaboard in the Big Dance.

So the answer is to make sure that Hawthorn does not reach the Grand Final.

Firstly, Fremantle and West Coast need to keep winning and ensure that Hawthorn does not leap into the top two with its huge advantage of a home qualifying final.

If the Hawks finish third behind the two Perth teams, they will need to travel to Subiaco for the first final (as it stands now, against the Eagles).

If Alastair Clarkson’s team loses that first final the equation gets much tougher.

They would come home to Melbourne for a semi-final, then if they get through that, most likely travel back to Perth again for a preliminary final (as it stands, against Fremantle, assuming the Dockers finish on top and win their qualifying final in Perth).

Of course, Hawthorn is a juggernaut.

It’s confronted headwinds before, notably last year when half the team went down with injuries and even Clarkson himself was absent for five weeks with an auto-immune condition.

To be sure, they are a formidable force, arguably the greatest sporting club in the land with three premierships in the past seven years. Hawthorn is quite capable of managing all this. But it cannot be easy. Potentially, it could be too much.

Right now, the Perth teams are in a great position. It comes down to whether they can hold their ground.

For all the pessimism talked in the media about Ross Lyon’s Dockers, they are clear on top.

They found a way last weekend on David Mundy’s late goal against Richmond, drawing on all the fanaticism and the resilience that Lyon’s teams have in spades.

Whatever you say about the Dockers, they are resilient enough that they will be terribly hard to beat.

As for Adam Simpson’s Eagles, they are a revelation.

Josh Kennedy has been the best tall forward in the competition and Matthew Priddis has bettered his 2014 Brownlow Medal season.

Half a dozen other players have had breakout years, and Simpson has devised a web-style defence to cover for losses in the back half that could have been fatal to his team’s chances.

Simpson is the coach of the year; ironically, he is one of four AFL coaches who burst from the Clarkson pod. Clarkson, the greatest coach in the game, has created his own enemies.

I still fancy Hawthorn strongly, and I see only two other contenders, both from the west.

We shouldn’t be surprised that the Hawks are there again, given that everything went wrong last year and they still won the Grand Final by 10 goals.

In 2015, the injury toll has been far lighter, and Clarkson’s team look like the Brisbane Lions of 2001-03, sitting in the pack, knowing that they have the ingredients when it counts.

For now, though, it is down to the two Perth clubs. Let’s see what they have.

RUN HOME FOR THE TOP THREE:

Western Front the only thing that can stop Hawks