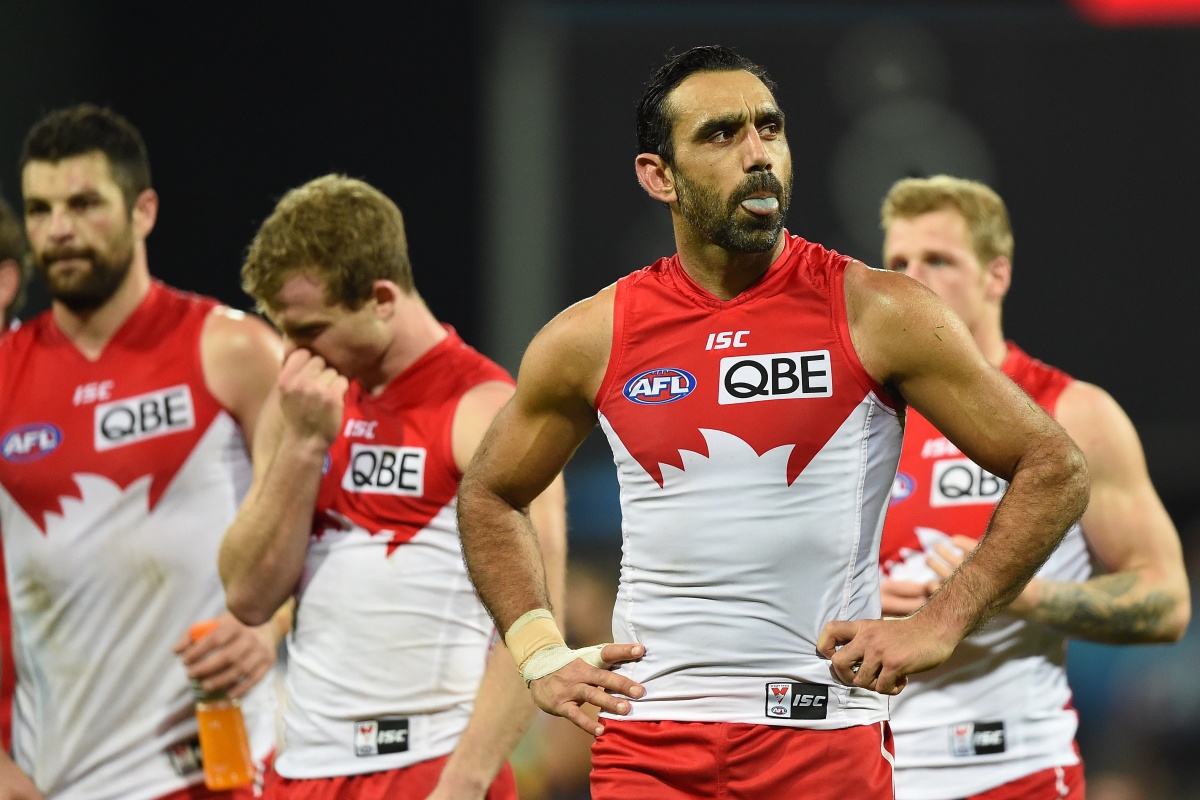 I was at the game in April 1993 when Nicky Winmar lifted up his St Kilda guernsey and pointed at his bare brown skin, in response to racist abuse from Collingwood supporters.

Standing in the outer, I was not fully aware of what happened, let alone its significance.

But I knew the crowd was on Winmar’s case and that he responded to them after the siren, when the air seemed to crackle with static electricity.

• Goodes could be contemplating retirement
• How Adam Goodes can stop the boos: Grant Thomas
• Why every AFL player should stand with Goodes
• Goodes booing a shameful period: Whateley

The football and the spectating had a rougher edge in those days – no closed roof at the Docklands, and you could run onto the ground after the second siren.

But the racism coming from the crowd and the players was often terrible.

A turning point came in 1995 with the confrontation between Michael Long and Damian Monkhorst. Long’s example and the work of the AFL have greatly reduced racism in and around the game.

Yet the booing of Adam Goodes – and the sometimes bizarre defences and explanations of it – show that more has to be done.

Some people say the booing is in response to Goodes staging for free kicks, or him being a dirty player, or just an umpires’ pet.

I say that’s rubbish and that the roots of his treatment lie in racism.

How else to explain that he alone out of more than 500 AFL players gets this treatment?

While Australia has embraced some Aboriginal sports stars, they have not been personalities who challenged white Australia.

Cathy Freeman showed nerves of steel to win a gold medal at the Sydney Olympics, but still seemed shy behind a wide smile. Evonne Goolagong Cawley won seven tennis grand slam titles, with an easy grace and a minimum of fuss. Graham “Polly” Farmer changed how Australian Rules was played, but he was a quiet man who spoke through deeds, not words.

Not so Adam Goodes. But he speaks up for himself and the Aboriginal cause and is prepared to ruffle feathers, even upset people. He is a rarity for an Australian sports star – one who is engaged in the public arena (not through trying to flog products and make money).

In 2014, The Age journalist Jake Niall argued that the hostility to Goodes could be partly explained by the thesis of an African American writer, Shelby Steele, who divided black public figures in the United States into “challengers” and “bargainers”.

• It’s time to show Goodes some respect: Jetta
• Adam Goodes to talk with AFL about boos, racism
• Swans give Goodes a break

These American challengers included film-maker Spike Lee and activist Jesse Jackson. They did not let any racism pass and were often confrontational. The bargainers included Oprah Winfrey, Tiger Woods and Barack Obama, and they adopted a “go along to get along” view.

It was with sadness that I heard supporters of my team, the West Coast Eagles, boo Goodes at the weekend. One offender has even claimed that telling Goodes to go back to the zoo was not a racist comment.

The booing at the weekend was widespread and not limited to a few yobbos, but is also found among other clubs.

So what is to be done? This is difficult because the AFL is like a giant pantomime, where the crowd interacts with the action on the field.

Fans despair when their players fumble and cheer when they team kicks a goal. They yell advice – like KICK THE BALL HE’S BEHIND YOU and THERE’S A LOOSE MAN OUT ON THE WING – and seem surprised when their advice is not heeded.

And, like all pantomime audiences, they look for a villain who they can hiss at.

Put simply, part of the crowd will do something when they are told not to do it. And, in my view, the suggestion that the game should somehow stop during racial incidents is misguided.

Yet the response of the players is critical. Back in 2012, Collingwood’s Dale Thomas reported a fan for racially abusing his opponent from the Gold Coast Suns. But Thomas kept on playing, as did his opponent.

This week, the AFL Players’ Association spoke out in support of Goodes. That is a step in the right direction, which will hopefully be echoed by individual players and teams.

This will hopefully encourage supporters from all clubs to stop and think. And to ask themselves why they are really booing him.

Mark Skulley is a freelance journalist who is based in Melbourne. View all of his columns here.