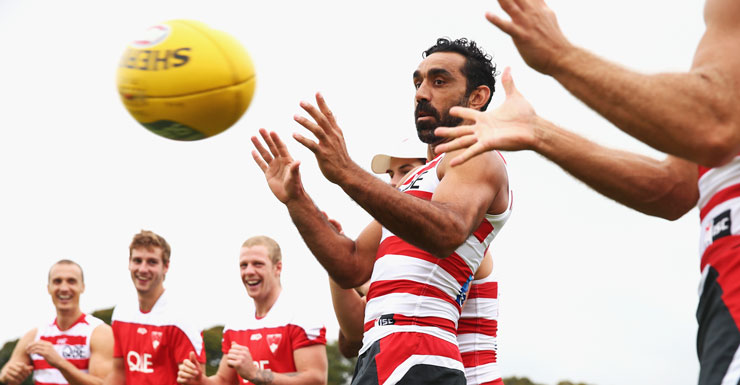 The issue was reignited on Sunday when some West Coast fans booed the two-time Brownlow Medallist during the match.

Indigenous team-mate Lewis Jetta launched a war cry dance at a section of the Eagles crowd and later confirmed the display was in support of Goodes.

• Why every AFL player should stand with Goodes
• Adam Goodes: aggressive, confrontational and right
• Why Adam Goodes can help re-educate Australia

The AFL Players Association, AFL and Sydney will meet with Goodes on Tuesday.

“The AFL Players Association and our members are extremely disappointed with the ongoing and unjustified treatment directed towards Adam Goodes,” the association said in a statement.

“Adam is a champion of our game, but above and beyond that he is a champion human being and the ongoing vilification directed towards him is taking its toll.

“The AFL industry prides itself on its inclusivity and diversity for both players and fans.

“As such we call on all AFL fans to show Adam the respect he has earned from his contribution on and off the field.”

The next likely flashpoint is when Geelong hosts Sydney on August 8.

“I would say there’s definitely a racist element to it,” Buckley told Fox Footy.

“I wouldn’t say it necessarily started that way, but I definitely see that.

“I reckon we are at a position in the game and in society that if you booed him the next time at Simonds Stadium in a couple of weeks, I reckon you get a clip across the ear from a few people.

Buckley later clarified his comment, saying he meant “howled down” rather than “a clip across the ear”.

Adam Goodes to talk with AFL about boos, racism