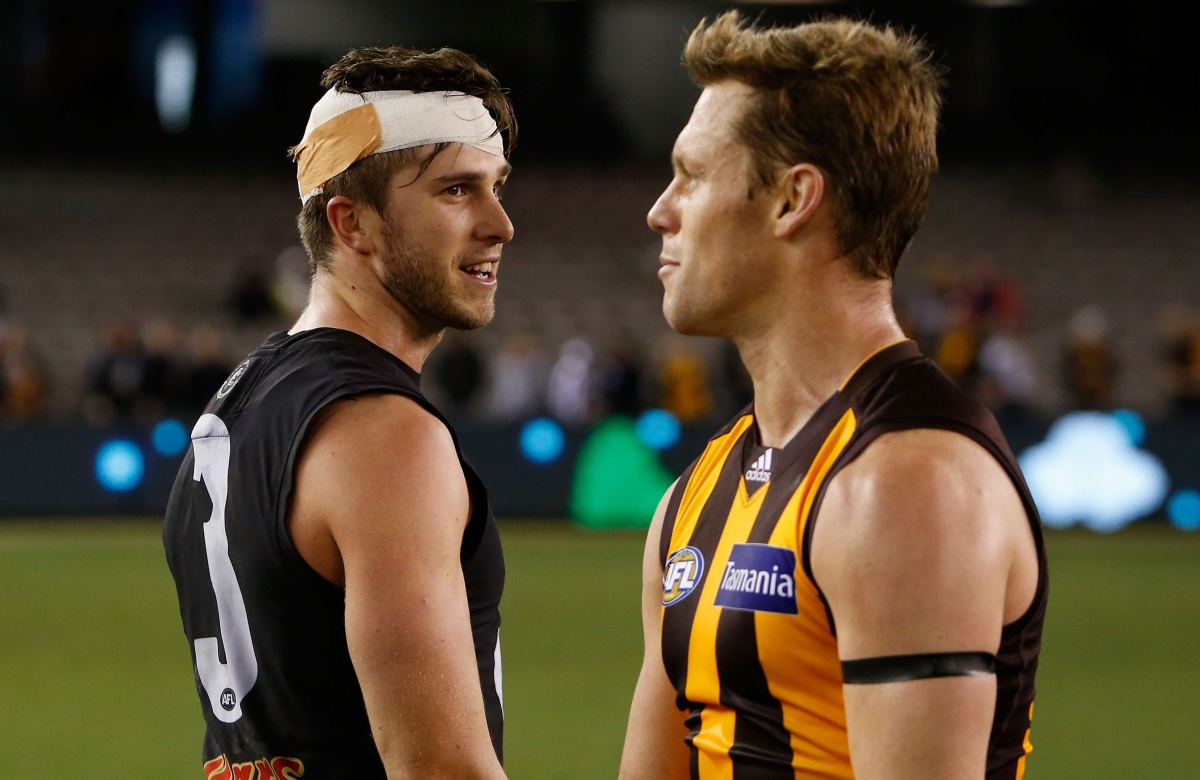 Hawthorn star Sam Mitchell has attracted more than his fair share of headlines this year.

In addition to another outstanding season, Mitchell’s knees into both Taylor Walker and Nathan Fyfe – acts he said were instinctive in a bid to protect himself – have courted controversy.

The Hawks on-baller also made light of Essendon’s ongoing supplements saga, pointing to his arm and making an injection gesture during the final quarter of the Round 13 clash between the two bitter rivals.

So the 32-year-old was probably hoping to sneak under the radar for the next few weeks as the Hawks prepare for a finals campaign.

Unfortunately for Mitchell, he was again big news in football across the weekend, but this time it had nothing to do with his on-field conduct.

During the second quarter of Hawthorn’s 23-goal thrashing of Carlton on Friday night, Channel 7 commentator and former North Melbourne champion Wayne Carey posed a question to his colleagues.

“Just having a look at Sam Mitchell, I want to ask you a question,” Carey said.

“Would he get a game at any other club? … Don’t get me wrong, I think he’s an absolute champion, but if you’re in a lesser team, a team that’s not winning, you’re expected to put pressure on and his pace doesn’t allow him to do it.

“In any other team, his pace would be a concern. If you put him in this Carlton team, they would say he doesn’t put enough pressure on.”

While Mitchell has enjoyed an outstanding AFL career – he has won four best-and-fairests, played 276 games and won three premierships – he has hardly slowed.

In fact, he is primed to win Hawthorn’s best and fairest award, the Peter Crimmins Medal, again and has clearly been the Hawks’ best player this season, averaging 30.5 disposals per match.

So it was no surprise to see Carey’s comments were met with derision.

When told about Carey’s comments, Hawthorn coach Alastair Clarkson said at his post-match press conference: “[It’s] not even worth responding to really, is it?”

The hashtag was busy across the weekend so we’ve sorted the wheat from the chaff to bring you the best:

Mick Fanning should have finished his wave. #thingstheducksays

“I wish Hawthorn would always wear their alternate guernsey, it looks good” #thingstheducksays

Caddying for Robert Allenby would be such an enjoyable experience #thingstheducksays

Ronaldo wouldn’t get a game in the A-League #thingstheducksays

Ringo was the best Beatle #thingstheducksays