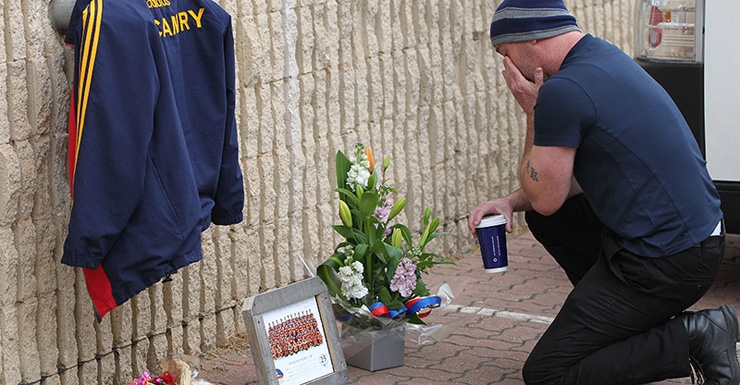 The AFL community has reacted with shock and sorrow to the death of Adelaide Crows coach Phil Walsh, one of the ‘most innovative minds in the game’.

Mr Walsh was allegedly murdered in the early hours of Friday. His son has been charged with the crime.

Fans have begun placing scarves, jumpers and caps in front of their homes and uploading photos of the tributes to social media.

The Adelaide Crows said their club was “devastated” by the tragedy, as legends of the game described the coach as an intelligent and revered leader with a quirky sense of humour.

The Crows legend and current board member spent most of Thursday with Walsh and said he was ‘shocked’ by the death of the ‘super coach’.

“I said it as early as last week — I think we’ve got a Premiership coach here,” he told radio station Triple M.

Ricciuto was instrumental in appointing Walsh to the role for the 2015 season.

“It’s just unbelievable, everyone is in shock and our feelings go out for his wife.

The Port Adelaide champion who played under Walsh in 2004 described him as ‘phenomenal’.

“From a player that played under him he was a phenomenal person and phenomenal coach,” Tredrea told Nine Network.

“Words can’t describe what the feelings are.

“The whole footy world is in shock.”

The veteran coach, who played with Walsh at the Brisbane Bears, expressed his sadness at the news, saying he was ‘stunned’.

“He was very professional in the way he prepared himself, very thorough, very committed to his footy and very passionate,” Eade told the Brisbane Times.

“It’s a hard one, it’s going to be felt right across the league, by supporters as well.

“When things are a tragic accident or illness it’s bad enough, but when it’s this situation it’s quite devastating really.”

Phil Walsh was a man of “boundless energy and enthusiasm,” said the league’s boss.

“Our industry is grieving today, and we send our love and support to the Walsh family, the Crows staff and players, Phil’s wider circle of friends, and the other clubs he worked with, and his many colleagues across the AFL.”

The sports commentator remembered Walsh as “one of the most innovative minds in the game”.

“He had such a lovely way about him,” he told the ABC.

“He’s formed a very close connection to his players in a short period of time.

“He had a great understanding of what he didn’t have, so when he got the job he privately took himself overseas and did a course about man management because he thought that was his great failing.”

The veteran broadcaster said Walsh was a standout leader.

“He was charismatic. He had leadership qualities. He was a bloke you wanted to follow,” McAvaney told Channel Seven.

“He was very thoughtful … He was larger than life.”

Former Richmond player and Nine Network commentator Nathan Brown said the death was shocking and would impact many AFL clubs.

“He played for Collingwood, he played for Brisbane. He’s been at West Coast, he’s been at half the AFL clubs. This is going to touch so many people.”

The Collingwood coach said he was “so sad” to hear the news.

“We are all flesh and blood.

“Love each other. Thoughts with all family and friends.”

Phil Walsh was the conditioning coach at Geelong for a brief period at the start of Ling’s AFL career.

“He’s just been such a quality person in a tough environment,” Ling told Sky News.

“He was … held in such high regard.

“A lot of people would be really hurting and struggling with this news.

“Footy becomes almost irrelevant when you hear news like this.”

Walsh played his debut season at Collingwood, where he stayed for a season before moving to Richmond.

“The thoughts and sympathies are with Phil Walsh, his loved ones and Adelaide. A past player of our club. May he Rest in Peace,” his first club said in a statement.

The Tigers also expressed their condolences.

Walsh’s final club was the Brisbane Bears (now Lions), where he won a best and fairest medal.

The Lions also shared their “heartfelt condolences” to the Walsh family.

“In times of adversity is when a true team stands up and comes together” – Phil Walsh. Love you mate.

Footy world ‘in shock’ as tributes continue to flow