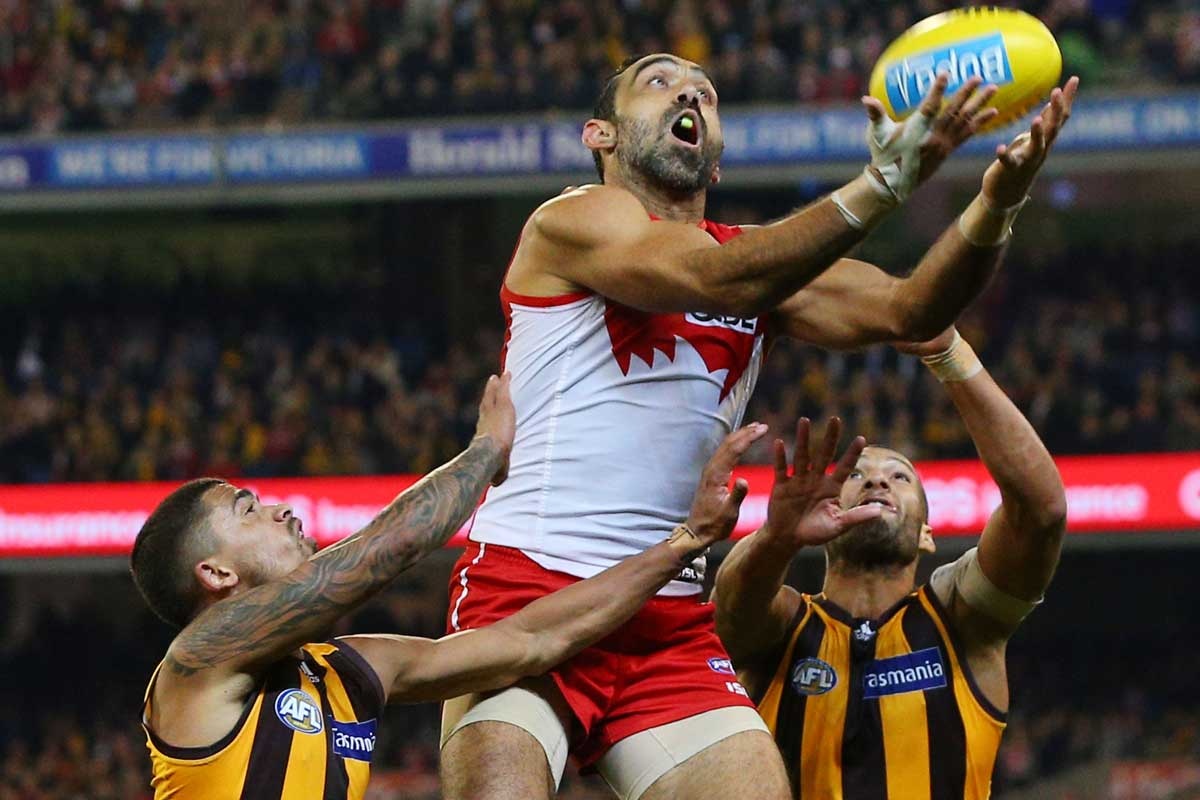 I’ve never been much of a booer.

It’s a mob activity and there’s something about it that makes me feel like an idiot.

I booed Mark Ricciuto once, Josh Carr a few times, and it never failed to make me embarrassed when I was finished, once the flush of emotion that triggered it subsided.

I’ve never booed Adam Goodes, but he’s moved me to profanity once.

Eight seconds into the final quarter of the 2006 AFL Grand Final, he took a handball from Barry Hall, charged to the 50m arc and slotted the goal, cutting the West Coast Eagles’ lead to five points.

I cursed him softly into my drink, wondering if my team was about to be dudded for the second straight year.

Some people boo Adam Goodes because he’s a good player. Some boo him because he might have cleaned up one of their own club’s players once upon a time.

Some boo him because he’s Aboriginal.

And some boo him because he’s astute enough to be outraged by aspects of this country’s history, and has enough confidence in himself to express his feelings.

“The history of our country is built on so much lies and racial policies, and things that have suppressed my people and lots of minorities in this country,” he said last year.

Pre-meditated goal celebrations are always a bit of concern (unless you’re these guys).

Nearing time-on in the second quarter on Friday night, Goodes kicked a goal that put his side up by 47 points against a Carlton team with a caretaker coach and without their three best players.

It was a nothing moment in a nothing match, another Friday night fizzer, until Goodes did what he does best now that his stellar football career is in wind-down mode – he got people talking.

He celebrated his goal by embarking on a 30-metre dance, shouting in anger, which culminated in a run towards a pocket of Carlton supporters and a simulated spear throw.

He later labelled his celebration a “war cry”.

The Macquarie Dictionary defines a war cry as “a word or phrase, shouted in charging or in rallying to attack”.

Goodes knew his act would put race relations in this country front and centre, during the AFL’s nice, inoffensive, musical and pretty-guernseyed Indigenous Round.

People have criticised Goodes’ celebration for being too aggressive.

And it certainly was. War cries are supposed to be aggressive.

One look at his face and you see a proud, angry black man no doubt frustrated by the glacial pace of change in his country.

But white, middle-class football fans who feel Goodes’ celebration was ‘too aggressive’ or ‘inappropriate’ are missing the point.

To take Goodes’ celebration at face value is ignorant.

He ran towards a group of opposition supporters and shouted at them while brandishing an imaginary spear.

But symbolism is important. The Carlton supporters were unwitting patsies in Goodes’ theatre.

Just as when then-Prime Minister Kevin Rudd retroactively said “sorry” to Indigenous Australians in 2008, it was a war cry against abuse past.

It was a war cry aimed at his country, a country Goodes is desperate to make a better place both for his own people and everyone else.

By putting himself in the spotlight, and taking the slings and arrows (like the defacing of his Wikipedia page), Goodes has reinforced his position as Australia’s pre-eminent spokesperson on Indigenous affairs.