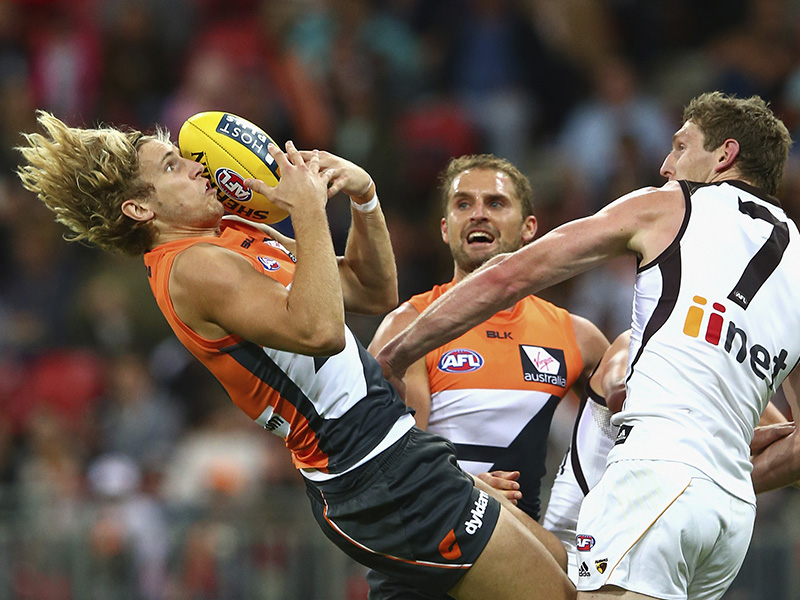 GWS has caused the upset of the AFL season, beating the premiers Hawthorn by 10 points in a pulsating encounter at Sydney Showgrounds.

Hawthorn took a 15-point lead after the first quarter, but there were promising signs for the home crowd.

The Giants looked to have too much speed for the premiers, as they kicked five goals to two in the second term to hold the lead at half-time by four points.

Paul Puopolo and Jack Gunston kicked three early goals in the third quarter as a fierce Hawks side grabbed the momentum back.

But a brilliant kick from Callan Ward found Jeremy Cameron to set up a goal then Tom Scully kicked a goal from distance a minute later to put the Giants back in front near time on.

The Hawks answered with two goals in two minutes, then Cameron kicked his fifth of the night, but Shaun Burgoyne kicked another late for the visitors to put them up by 10 points at the final change.

When Billy Hartung got the first goal of the final term, the Hawks were 18 points up at the five-minute mark, but the Giants booted three in a row to level the scores.

The tension rose as the Giants missed five shots at goal in quick succession to take a five-point lead, then Cameron received a free for front-on contact by a Hawks defender and he went back and kicked his seventh to give the home side clear space.

Another goal for Devon Smith was answered by a major to Taylor Duryea, but the Giants held on for a famous win.

The win made up for round 11,2014, when the Giants led against the Hawks at a wet MCG before going down by seven points.

GWS consolidated its place in the top eight at 4-2 after six rounds, while the Hawks slip to 3-3.

In other results, Sydney has climbed into the top eight with a 38-point win over Melbourne at the MCG.

The Swans never trailed after the opening few minutes, eventually taking a 46-point lead into the final term before running out 12.16 (88) to 7.8 (50) victors.

Kurt Tippett led the hosts with four goals, while Jeff Garlett and Jesse Hogan had two each for the Demons.

Tipping nightmare as the upsets keep on coming