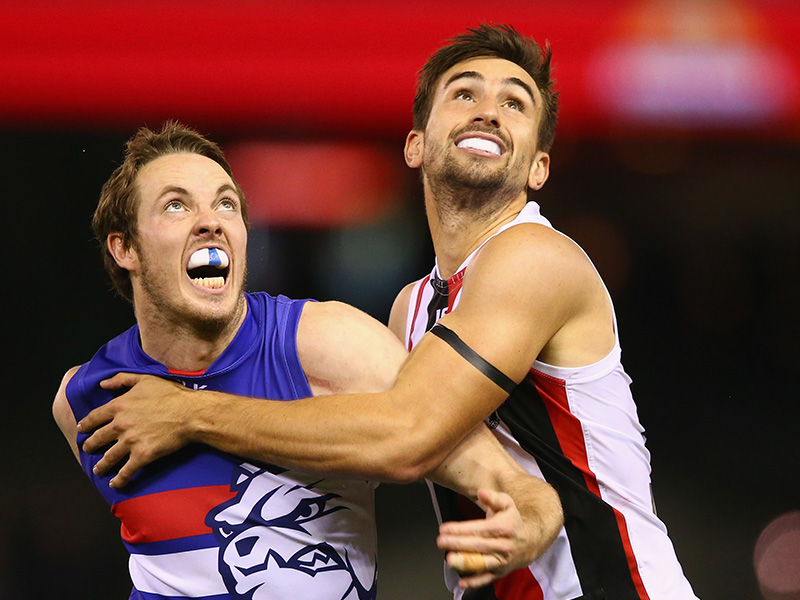 St Kilda have staged a remarkable comeback to defeat the Western Bulldogs by seven points at Docklands.

The Bulldogs led from the start, and a big second quarter looked to have put the contest beyond the Saints before they hit back after half-time with a vengeance to win 14.10 (94) to 13.9 (87) on Saturday afternoon.

The Bulldogs kicked three goals to two in the opening term to lead by seven points at the first change, but a seven-goal second-quarter blew the game open for the Bulldogs, giving them a 49-point lead at the half.

The Saints were not finished, however, as they kicked seven goals to one in the third term to close within two straight goals with a quarter to go.

Young forward Jack Billings proved the difference with the game on the line, kicking three vital final quarter goals as the Saints hit the front in the final minutes and then held onto the football to snuff out the Bulldogs’ chances.

Billings kicked four overall for the Saints, while Jake Stringer booted four for the Bulldogs.

The win puts the Saints on 2-4 after six rounds, while the Bulldogs fall to 4-2.

Adelaide’s Eddie Betts kicked a handful of goals as Adelaide thrashed an undermanned Gold Coast to claim a 41-point win at Carrara on Saturday evening.

It is the second week running the former Carlton goalsneak has booted five goals, as the Crows snapped a two-match losing streak.

The victory is the seventh time the Crows have beaten the Suns from seven matches against the expansion club.

Captain Taylor Walker also kicked four goals and punctuated his display with a strong pack mark in the third quarter.

Tom Lynch and Patrick Dangerfield kicked two goals each for the visitors.

Gold Coast came into the match with just 24 senior players available for selection due to a combination of injury, suspension and club-imposed bans.

Harley Bennell, Trent McKenzie, Brendan Matera and Danny Stanley were all forced to watch from the stands after being made unavailable for selection for breaching club alcohol protocols last weekend.

Several other players, including captain Gary Ablett (shoulder), David Swallow (knee), Nick Malceski (knee) and key defender Steven May (suspended) were also sidelined as the Suns slipped to one win and five losses this season.

The home team began brightly, kicking the opening goal through in-form Charlie Dixon, but Adelaide then kicked the next five goals to take a lead they would not come close to relinquishing all night.

Dixon, who booted six goals in last week’s win over Brisbane, finished the match with three goals in a rare bright spot for the Suns.

The Suns’ poor skills were again at the heart of their lacklustre display, with several shots for goal going astray and key turnovers allowing the Crows to transition quickly from defence.

Adelaide host St Kilda next weekend while the Suns head west to take on West Coast in Perth.