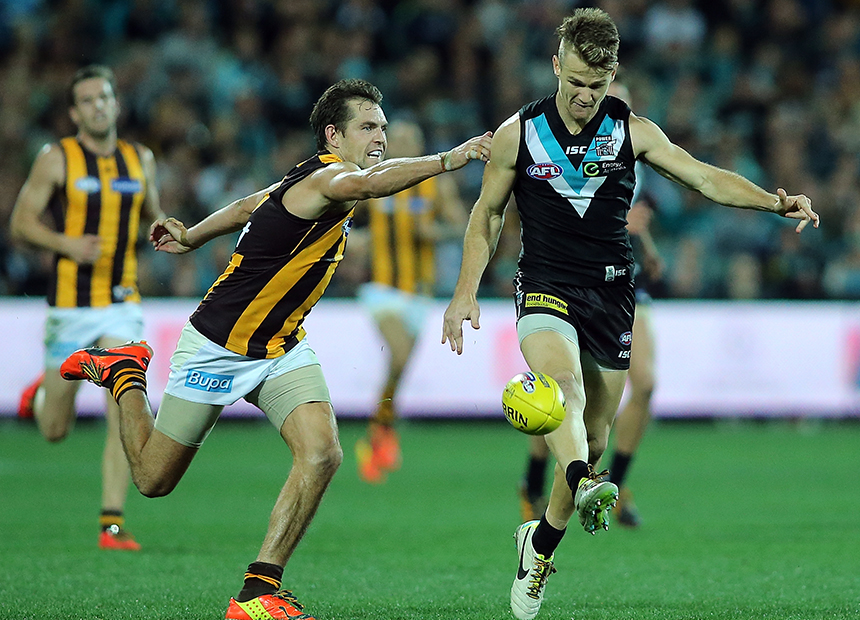 A leading AFL club has told its supporters it lost $2.5 million last year even though official documents lodged with the Australian Securities and Investments Commission show the loss was less than half that.

However, Port Adelaide CEO Keith Thomas has rejected any speculation the club announced a larger loss to improve bargaining power while renegotiating its onerous tenancy deal with Adelaide Oval.

“The Port Adelaide Football Club loss was not exaggerated,” Mr Thomas said this week after The New Daily questioned him about the discrepancy between public statements and club official documents.

Port Adelaide chairman David Koch told the club’s annual general meeting on February 13 this year that the club’s “operating loss” in 2014 was $2.5 million, despite the team repeatedly playing to capacity crowds at its new Adelaide Oval headquarters and missing the AFL Grand Final by just three points.

Mr Thomas, both before and after the February AGM, also referred to a multi-million dollar 2014 loss, at one point linking the club’s off-field fortunes to its tenancy deal at its new home.

“The numbers are crystal clear and compelling,” he told The Age on November 12 last year.

“If we can’t make a profit in these conditions, then how can we ever be profitable?”

But the club did not make a $2.5 million operating loss last year. In fact, it was much less than half that.

According to official financial accounts lodged and then re-lodged with ASIC last month, the club’s “operating loss” in 2013/14 was $1.09 million.

While accounts containing the lower number were available to members at the AGM, the club did not bother to disclose this number in the press release that was issued that day.

Confronted with the anomaly by The New Daily, Mr Thomas strongly rejected any suggestion the club had chosen to announce the higher figure to increase pressure on Adelaide Oval officials and the SANFL for a better tenancy deal.

“Our reference throughout the course of 2014 to the marketplace and the parties with whom we were in negotiations with (was) about our ‘trading loss’ which did not include additional SANFL grant income,” Mr Thomas said.

“The reporting of the statutory loss of $1.09 million versus the trading loss of $2.5 million did not give Port Adelaide Football Club any leverage in this deal as all parties had a great deal of transparency about each other’s financial positions throughout the deal timeframe.”

About a week after the initial media reports late last year of a $2 million-plus loss, the South Australian government threatened to intervene in the dispute between Port Adelaide and the SANFL over the stadium deal.

Eventually, an in-principle agreement was struck in January and legal contracts signed in March, more than three weeks after the club announced the $2.5 million “operating loss”.

The announcement did not include reference to a “trading loss”.

On February 13, Mr Thomas told the Adelaide Advertiser that “we are unhappy to lose $2.5 million”.

When asked by The New Daily to explain this comment, Mr Thomas stated: “We chose to focus on the loss attributable to how we performed as a trading business.

“We were taking ownership and responsibility for this result to our members, rather than trying to dress our loss up as something lower than it was by including SANFL funding of $1.4 million that we had to recognise as revenue.”

Even though Port Adelaide believed the club’s true trading performance was more than twice the official loss stated in the accounts, the aggregate salaries of its key management personnel last year increased by almost 25 per cent.

Mr Thomas said the increase in the pay of key staff was due to “step increases in remuneration and performance-based bonuses, of which football performance was a key factor for some individuals”.

“Further, there was an additional senior executive role in 2014 that was not in place for the whole of 2013, thus artificially inflating the percentage year on year comparison,” he said.