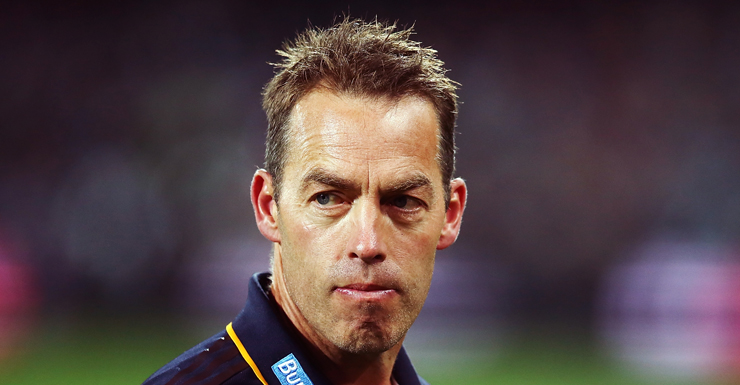 Hawthorn coach Alastair Clarkson has been involved in a scuffle with a fan outside the team’s Adelaide hotel following Saturday night’s loss to Port Adelaide.

In footage captured by a mobile phone, Clarkson is seen to shove the fan forcefully to the neck area after the man – who appeared intoxicated – yelled “go the Power” in his ear.

In an interview on Fox Footy, Clarkson has downplayed the scuffle and said he doesn’t expect an apology from the fan.

“I didn’t think it was too much of an incident,” he said.

“What concerns me more than anything is to have the freedom to do what you like and move freely against crowds,

“We encountered these three intoxicated gentleman and these three guys chased us up the laneway. They weren’t in a fit state.

“Unfortunately walking back from the ground to the hotel is a no no from now on.”

The AFL said in a statement they were “not yet in a position to determine whether any further action may be taken”.

The male supporter initially approached the coach and said: “Hey, Clarko, how was the win, mate?” before getting in closer and yelling “go the Power”, at which point Clarkson shoved him away.

The fan is then heard to say: “I got that on film, brother” before the footage ends.

A caller to 3AW on Sunday morning said that Clarkson had been subjected to provocation before the footage started.

“Alastair was walking back to the hotel with our general manager of football Chris Fagan and came across some intoxicated boys and Clarko was certainly harassed,” Fox told The Herald Sun.

“He politely declined to be photographed and videoed and the boys just got in his face and tried to get Clarko into the hotel and it was one of those issues that got a little bit ugly.

“We’ve spoken to the AFL and one of the issues is obviously getting back to the hotel safely.

“I think this one is extreme provocation. He’s been provoked, they were heavily intoxicated and these guys had altercations with a number of guests at the hotel.

“They had no Port Adelaide gear on, they just looked like punters on the streets to me and I wouldn’t even had known whether they’d been at the football or at the pub.

“I’ve got empathy for him (Clarkson) … Chris Fagan was in an awkward situation as well.”