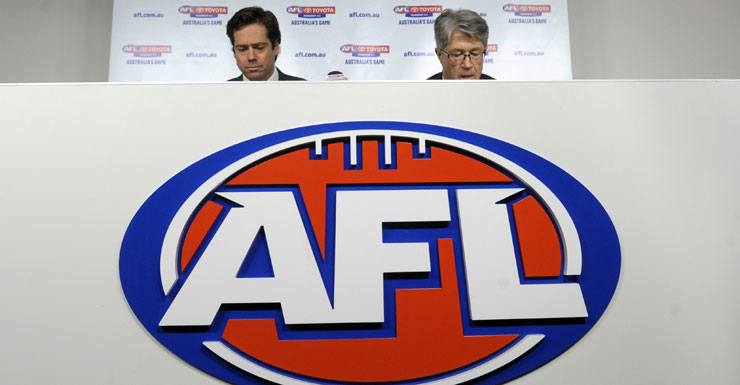 The national workplace umpire has blown the whistle on the Australian Football League, ruling it has to collectively bargain with employees in its media department.

The Fair Work Commission ruled that a majority of the 116 full-time employees in AFL media were in favour of collective negotiations to set their pay and conditions, a move that was strongly opposed by Australia’s richest sporting code.

The case opens the door to collective bargaining in Australia’s digital media and corporate newsrooms, which have sprung up alongside traditional media outlets like News Corp, Fairfax Media, the ABC, commercial television and radio.

• Hawks star hungry for more flags
• Free Sunday footy for children in 2015
• In pictures: the glory of that one day in September

The AFL will not have to agree to a collective agreement, but it will have to engage in bargaining with the union which covers journalists, the Media Entertainment and Arts Alliance.

However, the case has broader significance because it heard evidence that underlines that the AFL is now a major media player in its own right, which is challenging traditional models by delivering a product direct to the public.

During the hearings in October, the AFL presented itself as a sporting organisation that included a multi-media department and that AFL Media responds to the “sporting cycle and not to the media cycle”.

But Fair Work commissioner Anna Lee Cribb was unconvinced on this point.

“The product that is the content of the enterprise is football. However in terms of the way the product/content is produced to the public the timeframes … these are ultimately determined by the media cycle,” Ms Cribb said.

For example, the general manager of AFL Media Peter Campbell gave evidence that the organisation had a “news cycle” during the playing season of 16 hours a day, seven days a week which began with the 6am radio news.

In the off season, this workload contracted slightly to a 12- to 14-hour daily news cycle which includes live crosses to cover events such as the pre-season draft.

But Mr Campbell was reluctant to concede that the AFL was competing with traditional media providing football news to the public.

“I suppose you could call it competition, but, you know, I’d call it adding to the mix,” Mr Campbell said.

What’s interesting from a journalistic viewpoint is that the AFL started out as an in-house media production business, and still provides print and digital media content to commercial clients like Telstra.

But AFL Media was described in the hearings as an editorially independent news service, a role which grew rapidly over the last two years during the investigations and legal proceedings over Essendon’s supplements program.

Not everybody agrees with the idea of the AFL Media trying to break news, particularly traditional footy-mad media outlets like Melbourne’s Herald Sun. Critics have asked whether there is a conflict of interest in an arm of the AFL reporting on its parent organisation and the code.

“MEAA members in the AFL’s media department will now be better recognised as media professionals and part of our fast-changing media landscape.”

A central gripe is that AFL Media staffers want to have the same annual holidays in mainstream media – six weeks and three days, in recognition of working weekends and public holidays.

The AFL argued that all of its employees were required to work unsociable hours because matches are played at weekends, nights and public holidays.

However, the Fair Work Commission ruled a group of employees who “substantially perform an editorial and/or editorial/video production functions” wanted to bargain.

The hearings provided a tantalising glimpse into AFL staff morale in mid-2014, shortly after Gillon McLachlan took over as CEO from Andrew Demetriou.

It heard that the survey found that AFL Media employees believed the organisation’s top cultural values were cost-reduction, hierarchy, bureaucracy and silo mentality.

The AFL’s general manager of people, customers and community Dorothy Hisgrove argued that the responses reflected a “cultural journey” under a new CEO who was determined to drive a culture of collaboration and cohesion.

The AFL has since been working on building “One Team” values. But the Fair Work ruling means that its media arm has been recognised as a distinct operation, which looks set to keep growing in reach and importance.