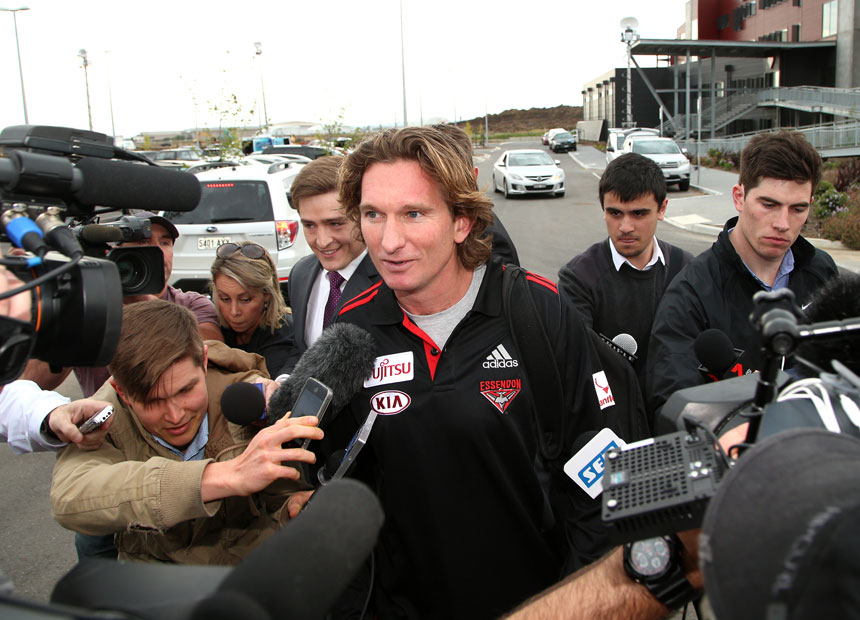 “Either we heal now as a team,” Pacino pleads to a group of players divided by turmoil, “Or we will die as individuals.”

It was a passing reference by Thompson, for the amusement of gathered journalists. But the fill-in coach would do well to watch the film, or at least the clip, again sometime soon.

So should James Hird. And it should certainly be compulsory viewing for the nine members of the Essendon board who on Monday decided Hird would remain the club’s coach for the “immediate term”.

Because it’s abundantly clear to me that those who run the Essendon Football Club now have only two options: stand together as one unit and see the ASADA mess through to its conclusion; or get the hell out of there – not just Hird, but Thompson and every member of a board that has made more fumbles than a footy debutant on grand final day.

One of the most sought after qualities in modern AFL footballers is the ability to make good decisions in high pressure, hotly-contested situations. Those who do it best are often said to be ‘good drivers in heavy traffic’.

Hird was the best on-field driver I’ve ever seen. Not only could he negotiate the heaviest of traffic, at times he seemed to stop it, finding space and time in the most contested situation to give off a handball, deliver a pinpoint pass, perhaps snap a goal. This incredible poise has served him well over the past 20 months as he’s endured the most searching – and, at times, appalling – scrutiny.

This is not to excuse his flawed decision-making in the earliest days of his coaching stint, but his grace under pressure since the Essendon supplement scandal became public has been extraordinary.

Which is more than I can say for some of the Essendon board members who sat in judgement of him. In fact, their responses at key points of this never-ending soap opera have been disappointing at best, inept at worst. If they were footballers, you’d cut them loose because of their poor decision-making.

Of course, being a board member of the Essendon Football Club during this period must be a thankless and demanding task. That has to be acknowledged. I give the eight men and one woman huge points for simply showing up. But, gee, they’ve fumbled the ball a few times.

The latest was last week’s attempted sacking of Hird after he decided to appeal a recent Federal Court decision against the club’s wishes. Various media reports had him gone Thursday afternoon, but they were premature.

It was another example of club management coming on strong, only to fall away at the last. In that respect, at least, they resembled the Essendon team of 2014.

The fumbles started when they allowed the supplements program to go on under their noses. I’m not sure how that could have happened, but let’s assume they were kept in the dark, and didn’t learn of it until just before we all did, back in February 2013.

Many supporters believe the club fumbled again by, first, self-reporting to the AFL and ASADA and then calling in former Telstra boss, Ziggy Switkowski, to inquire into what exactly happened. I could see their rationale at the time, even though I was less convinced by their decision to make Switkowski’s report public. Once the media got hold of it, the phrase “pharmacological experiment” entered the footy lexicon. It’s been used to belt the club ever since.

There’s little doubt about the next fumble though: in August last year new chairman, Paul Little, helped “negotiate” the heaviest penalties in AFL history, including suspension from the 2013 finals, a 12-month ban for Hird, a $2 million fine for the club, draft penalties, and a number of individual fines and bans for club officials too. Once again, and this is a recurring theme here, the only party happy with the outcome would have been the AFL.

In the midst of these “negotiations”, Hird decided he’d call the AFL’s bluff and take them to court. But he was prevailed upon, presumably by Little and others, to cop his whack so the club could move on. As a sweetener, they gave Hird a two-year contract extension and he headed off to France. That was another fumble.

It was at this point Mark “Bomber” Thompson took over the coaching reins. And a reasonable job he did too, although I still think Essendon played better under Hird. It’s been forgotten that they were challenging for top spot on the AFL ladder as late as round 18 in season 2013. At times this season, the Bombers appeared as flaky as their fill-in coach at his post-match press conferences.

In the final weeks of the season, Hird returned from his French exile and, you guessed it, the club fumbled things again. Instead of staring down a hostile media and welcoming a favoured son back to the coach’s box, they shunned him, consigning him to a desk and a bit of ‘list management’. What a disgrace.

But it was nothing compared to what the club did to him last week – banning Hird from attending the best and fairest night and threatening him with the sack if he pursued the next stage of a legal action the club helped initiate. Huh? Doesn’t anyone at Windy Hill or, rather, Tullamarine, see the irony in that?

Worse, that an entire episode dominated by a lack of process took another appalling turn because Hird’s employer didn’t want him to pursue…proper process. You couldn’t make this stuff up.

The club’s best and fairest night might well be the low point in a saga that threatens to destroy not only my club, but my love for it too. To see Thompson, supposedly Hird’s mentor – suffice to say, he did a less than stellar job in the role – unashamedly pitching for the coach’s job while Little beamed up at him from the floor below was, well, gut-churning.

Hird, who’s at least been consistent in his desire to see this whole sorry mess through, deserved better.

I couldn’t help thinking that if Thompson had made a suitably humble and gracious speech from the stage and then invited Hird up to jointly commit to pursuing the next Essendon premiership, it would have re-calibrated the whole mess. Instead he chose to make a job application while Hird sat at home.

Throughout the 20 months this has been running, Hird has been portrayed as a man who has put his own interests ahead of the club and his players. But what if the opposite is true: what if he’s put up with the accusations, insults, breaches of privacy, suspension, indignities and all the rest of it, because he believes that as their leader, he’s got to see this through to the bitter end. That to do less would be seen to bail on people he’s supposed to be leading?

Hird should be allowed to pursue his court action all the way to the High Court, if he thinks that’s what it takes to find the truth. His players should submit themselves to the next stage of the ASADA process too, with his support and cooperation. I can see no reason why the two can’t be conducted in a parallel fashion. Any move to further delay the ASADA probe would be little more than brinkmanship on the part of the drug agency.

I’m not sure where this finishes up, but I know what I’d like to see happen: everyone – Hird, Thompson, Little and his board – bands together and fights as one. Or they all go, handing over to new drivers who might do a better job of negotiating the heavy traffic. The players – and their supporters – deserve nothing less. As Pacino might say, it’s time to begin the healing.

Bruce Guthrie is editorial director of The New Daily and an Essendon member. He has never worn a duffle coat to the footy and doesn’t have a framed photograph of James Hird on his wall.