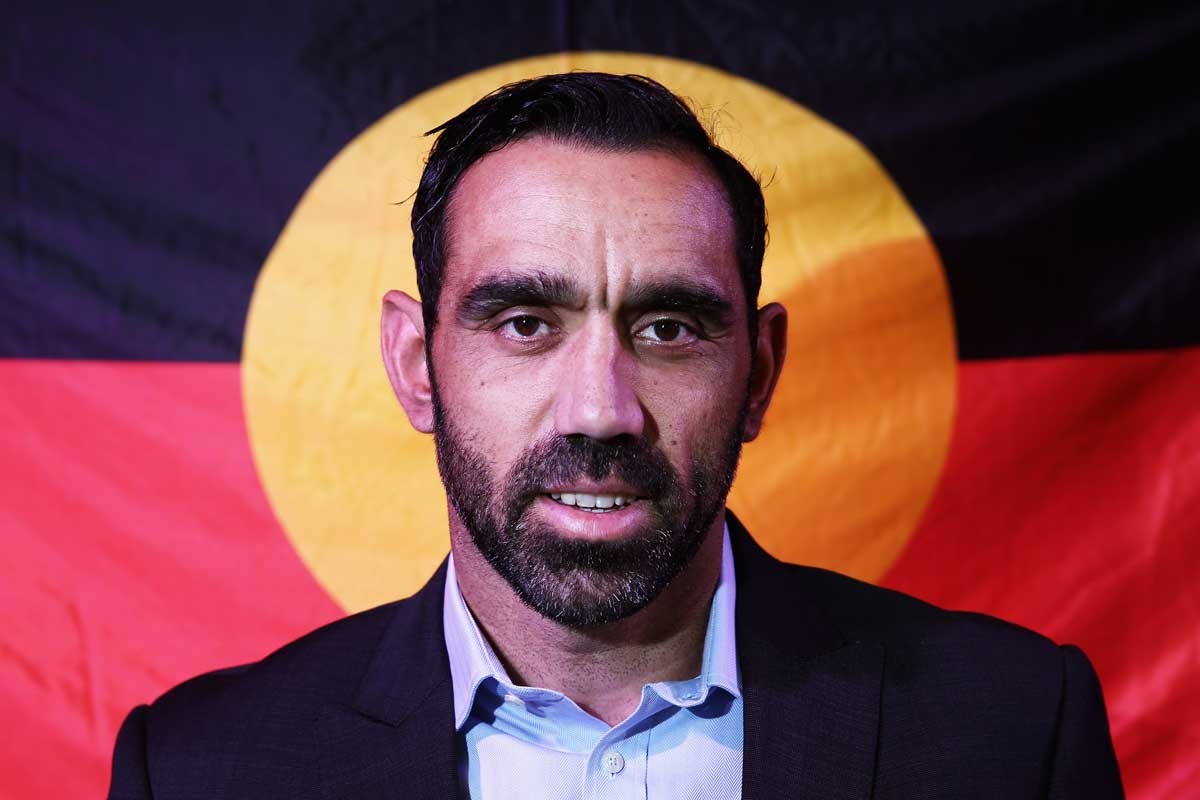 Speaking exclusively to The New Daily, Demetriou said the criticism of Goodes is “disappointing and unfair, especially if you know the man as I do”.

“Instead of booing him, we should be celebrating his extraordinary ability,” he said.

Despite numerous accolades, sporting and otherwise, Goodes occupies an ambivalent place in the football landscape. Fans heckle him, conservative commentators savage his appointment as Australian of the Year, and denigrating comments about him abound on social media.

Some attribute the jeers to Goodes’ outspokenness on indigenous affairs, specifically the moment he told stewards to eject a 12-year-old girl from the MCG for shouting “ape” at him, or his subsequent fallout with Collingwood president Eddie McGuire, who linked him to the King Kong musical.

Others, such as Essendon great Matthew Lloyd and cricket legend Shane Warne, say he dives for free kicks. The latter questioned his suitability as Australian of the Year.

“He simply stood up for what he believes. He didn’t know at the time it was a 12-year-old girl who made the comment and he was quite understanding and forgiving when that emerged. I thought the issue was handled well,” Demetriou said.

“Adam didn’t ask to be named Australian of the Year. That honour was bestowed on him as it should have been.”

Sydney Swans teammate Michael O’Loughlin, who thinks of Goodes as his “little brother”, said the criticism means nothing, and is to be expected.

“Not everybody loved Muhammad Ali. He was American public enemy number one back in those days, but now he’s the most loved person on the planet. Same with Nelson Mandela. I’m not putting Adam in that category. Well, you never know,” O’Loughlin said.

“Everything he does is straight from the heart. If people don’t see that, well, they can sit on their couch and tweet about it. We don’t worry.”

O’Loughlin denies his friend is too outspoken to be Australian of the Year.

It’s a really courageous thing he’s done because he knew people weren’t going to like some of the things he says, but it’s what he believes.

“Isn’t that what you want from your leaders – for them to speak the truth, speak honestly and be open? Or do you want the Australian of the Year to stand for nothing?”

Becoming a champion for those without a voice was a conscious and courageous decision, O’Loughlin said.

“It’s a really courageous thing he’s done because he knew people weren’t going to like some of the things he says, but it’s what he believes.”

University of Newcastle Professor John Maynard, a historian who has written two books about indigenous athletes, said the critics of Goodes are few, which illustrates both Australia’s progress and the distance that remains to full maturity as a nation.

Until the 1970s, indigenous players were largely excluded from sport, according to Professor Maynard.

“Thankfully we’ve come out the other end of that, but as you see there is a small minority who still carry these racist issues against indigenous players,” he said.

“We’re seeing changing times. You wouldn’t have seen players like Adam Goodes and Michael O’Loughlin or Greg Inglis 40 or 50 years ago, so that is a change we can recognise.”

Former Essendon board member Beverly Knight, who has represented many indigenous athletes and artists, is proud of how Goodes has used his national platform to promote his cause, and does not see this as divisive.

“Once you get notoriety, like he has, he’s finally able to have a voice to express things he has always thought,” Knight said, rather than keeping it “in the closet”.

Jake Niall has argued in The Age that Goodes is paying the price for adopting the role of a “challenger” on racial issues, as opposed to a “bargainer”, in the dichotomy identified by American writer Shelby Steele – more of a Spike Lee or Jesse Jackson than a Barack Obama or Oprah Winfrey.

Goodes appears to relish his role as a fierce opponent of racism, telling Fairfax Media after being racially abused by an Essendon fan this season that silence only benefits those who discriminate.

“Unfortunately, some people don’t want to have those conversations – they might not be ready. But I’m definitely ready,” he said.

“I’ll continue putting my neck out there because there are so many good people out there who are supporting the messages, who want to see some changes.”

In March, Bolt criticised the footballer in the Herald Sun for using the Australian of the Year award as a platform to “vilify our past and preach division”.

This was in reference to Goodes’ promotion of Utopia, a John Pilger documentary about the abuses of indigenous peoples perpetrated by European settlers. Bolt declined to comment to The New Daily.

Similarly, Miranda Devine wrote in The Daily Telegraph in January that Goodes was a “terrible” choice for the award because he victimised the teenage girl who used a racial slur.

Anonymous comments posted below Devine’s article criticised the footballer for referring to Australia Day as a day of sorrow for indigenous people. Another said he “couldn’t take it on the chin from a little girl”.

The University of Sydney Associate Professor John Evans, director of undergraduate indigenous programs, said such comments were “misplaced” and “poorly informed” and proof that some parts of our society have failed to move with the times.

Far from seeking to divide Australia, Goodes is fighting to unite it, Associate Professor Evans said.

“If you don’t identify those things that are wrong in society, then you can’t have a cohesive society,” Evans said.

“Racism is essentially about power, and he is trying to change that power relationship so that Aboriginal people aren’t vilified.”

‘Get off Adam Goodes’ back’