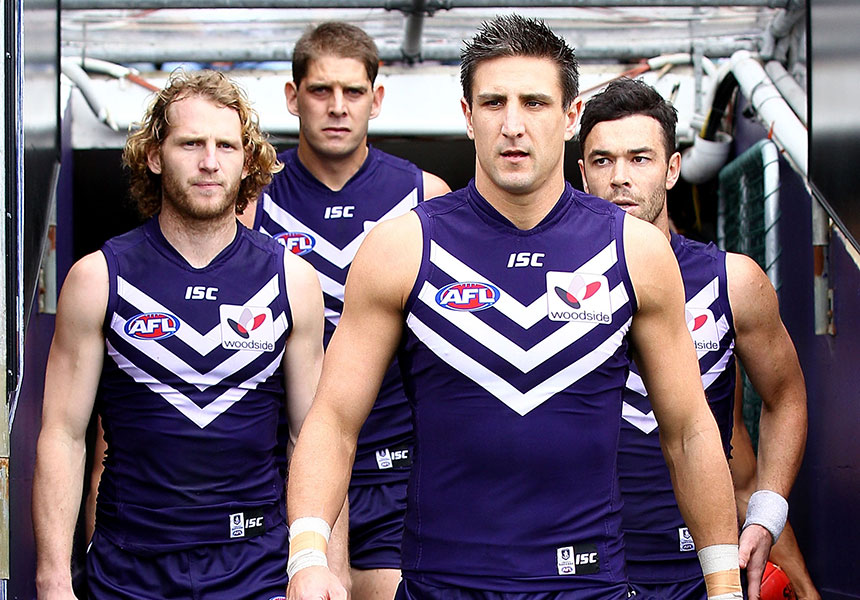 Ross Lyon your time is now. Fremantle … it’s time to win the flag.

Ross was once a teammate of mine. He is brutally honest and there’s no more cunning a leader in the business of footy. He loves his psychology and demands perfection. His team is very competent at bending every rule in the book.

When Fremantle presented him with the opportunity to take over what they believed to be a list that was ready to win it in September 2011, he jumped at it. The Saints were not thinking fast enough to present him a deal so, in a shock to many, Fremantle sacked and paid out former coach Mark Harvey. From there Fremantle’s game has gone from strength to strength defensively: Ross’s trademark.

• Fremantle’s flag: only calamity can stop Dockers
• Dear AFL: I’m over your culture of manipulation

This prediction in my mind has been years in the making.

It is not that I think Sydney, Hawthorn or Geelong aren’t capable of winning, or deserving, it is just that all those clubs have won. There is nothing like being the odd one out.

If you make Sydney’s midfield run with a lot of physical pressure they don’t go as well as their reputation suggests.

Don’t worry about who isn’t playing this time of year. Worry about the health of those who are playing.

What about the rest of the finals?

Hawthorn v Geelong – To me, Geelong have an unwanted mental problem hanging around: rubbish second halves. If you can get Geelong one on one and move it quick on the counter attack they can be exposed. Both have very old age profiles and I would be picking players that are in full health and not players who have big reputations. Reputations means nothing if your body isn’t healthy. Hawthorn have won two of the past three and I think this one could be a bigger win for them than the last regular season game.

Port v Richmond – This should be a very good game. Both sides have finals scars to bare from last year. Port for mine, in a close one. Whatever happens that stadium will be loud.

North Melbourne v Essendon – Take your pick. Both are ready. North stank in 2012 in their one and only finals game and Essendon got thrown out of the finals last year, or should I say pushed out after some dubious decisions from AFL head office over their supplements use. I think Essendon has reached its goal for the year – to make finals. North, well who knows which North you will get, but their best is very good. Their forward line with Ben Brown in it is more potent than last year.

Sydney v Fremantle – Even if Sydney beat Fremantle this week I still believe it won’t matter. Most think Sydney have a hard running midfield but Freo has a very tough, tall and talented midfield and a better running group than anyone. It has been the driving force behind their success. If you make Sydney’s midfield run with a lot of physical pressure they don’t go as well as their reputation suggests.

Hawthorn are more confident than last year after winning the flag. Their lack of anxiety is impressive to watch.

Who will play Fremantle in the grand final? Most probably Hawthorn. Their defensive pressure is very good in the open field. Their foot skills are the best on offence in the league. They work better as a team the more pressure you put on them. And most of all have much more calmness with the ball in their hands while being tackled than even last year. They are more confident than last year after winning the flag. Their lack of anxiety is impressive to watch.

Finally, after many attempts Ross has realised a quick, more potent style of scoring can win games … not just total defence. The last three weeks they have scored over 100 points a game. Very good signs against very good sides in Hawthorn and Port.

I can put up stats and a mountain of numbers to manipulate what may or may not happen this finals series but really only one thing matters to me – can Ross conquer the demons of the past and go one better? I am betting Fremantle can – but not without a massive fight.