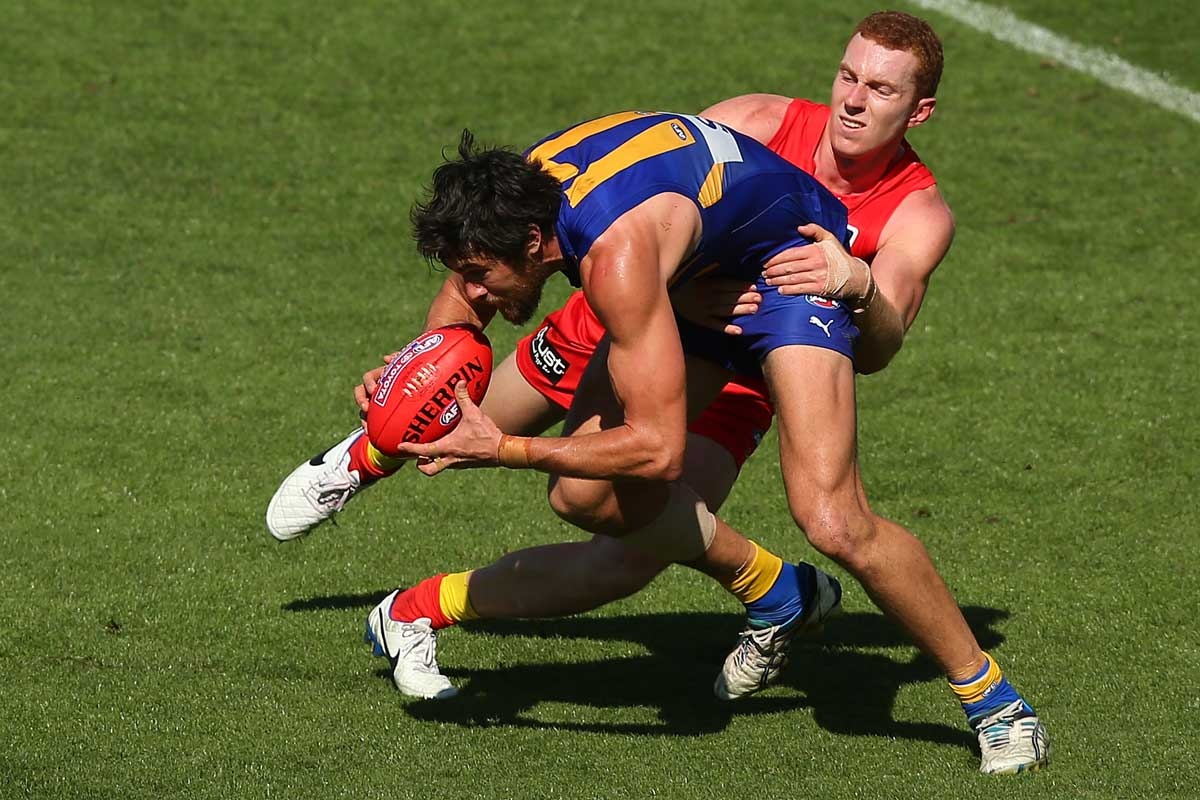 If you need any more proof that the AFL’s draw is broken, look no further than the fact the West Coast Eagles are still in contention for a finals berth.

The Eagles have failed just about every test put in front of them this season, yet amazingly are slight favourites to finish eighth and be the first team bundled out in September.

Against the current top eight, the Eagles are 0-9, yet their percentage of 114.7 – built on crushing wins against poor opposition – has them in the box seat.

• Your team and the finals: the race explained
• Eagles didn’t finish like killers

After three rounds of the 2014 season, West Coast sat on top with three wins and a percentage of 216.6. They had played the Western Bulldogs, Melbourne and St Kilda.

Something, however, rankles about the Eagles efforts towards the end of last season.

A flogging from Geelong in Round 4 saw it drop to 140.9, and it’s been in steady decline – save for home pummellings of Collingwood and Melbourne – ever since.

Put simply, the Eagles don’t deserve a finals game – their percentage is inflated by their soft draw.

They finished 13th in 2014 which – as a result of AFL equalisation measures that groups the competition in three groups of six when deciding the next season’s draw – saw them playing only one team from last season’s top six (Fremantle) twice.

After comfortably beating Essendon in Round 20 last year, the Eagles rolled over and played dead against Geelong, Collingwood and Adelaide, results that ensured that bottom-six finish.

As an Eagles supporter, I’ve always vehemently defended them against any suggestions of tanking.

Sure, they picked up a priority pick in 2010 after winning the wooden spoon, but that was the year the Gold Coast pillaged the draft and took most of the best young talent.

West Coast picked up Andrew Gaff with pick four and Jack Darling with their priority selection at 26 (handy players, but David Swallow and Harley Bennell would have been handier).

Surely the year to tank would have been 2009, when names like Scully, Trengove, Martin, Morabito and Fyfe were on the market – yet the Eagles won four out of their last five to take 11th spot.

The club had a bad draft that year, but Eagles supporters could walk around with heads held high that at least we weren’t Melbourne or Carlton.

Something, however, rankles about the Eagles’ efforts towards the end of last season.

So what can the AFL do to make sure undeserving sides don’t play in finals, without extending the season to make all teams play each other twice, home and away?

They could try abolishing percentage when teams finish level on points, and instead decide who progresses on a head-to-head basis, as is the case in Italy’s Serie A.

Or look at the teams’ results against sides higher than them on the ladder, to compensate for the fact that each of their draws were different.

Maybe mini ladders could be formed.

The best way to prevent lame ducks seeing action in September is to go back to a top six, last seen in 1993.

For instance, if Richmond, Collingwood, West Coast and Adelaide all finish on 44 points, the AFL should examine the percentage from results between those sides to determine who takes eighth place.

In a broken system that treats each side differently, the least we can do is evaluate teams that finish level on points equally in declaring who has had the better season.

If this all seems annoyingly complicated, it’s because it is.

The best way to prevent lame ducks seeing action in September is to go back to a top six, last seen in 1993. There may be two or three fewer games, but at least what we did see would be the best of the best.