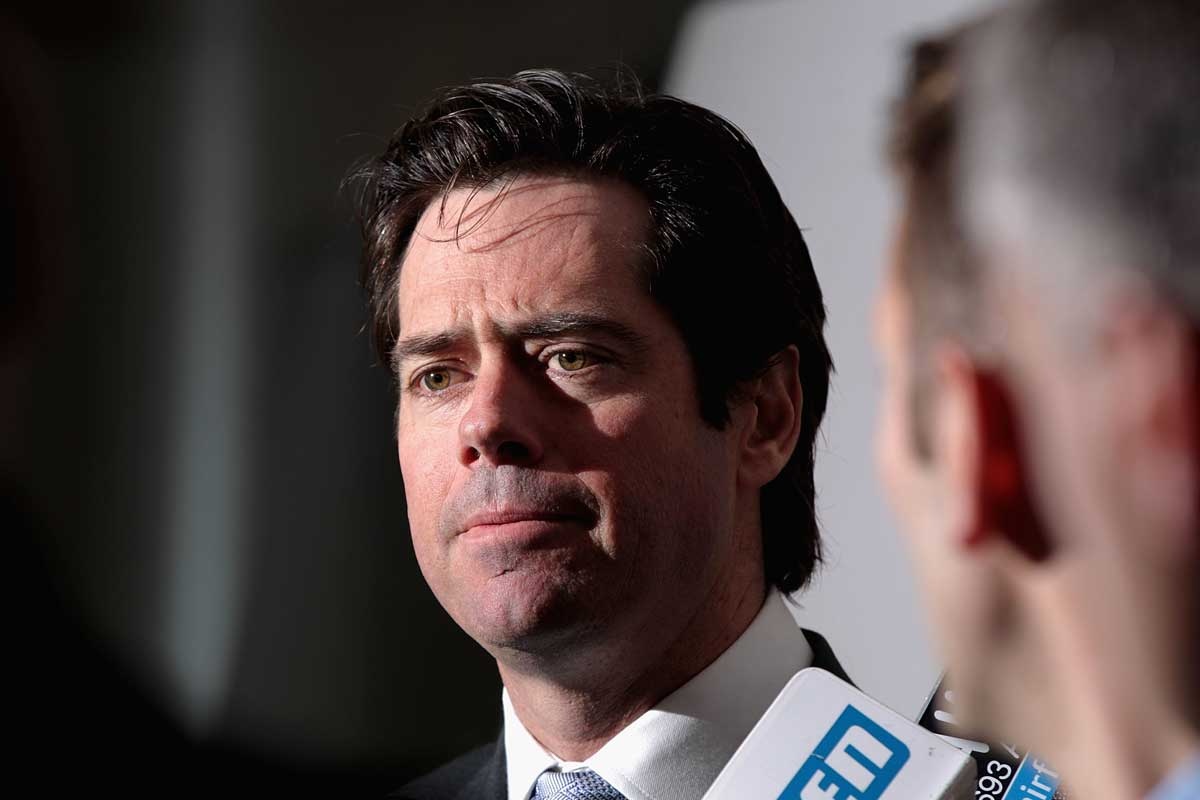 I’m just about over the AFL. The footy’s not the problem. Despite frequent grumbles from the bump-and-biffo traditionalists, the game’s never been better. The grubbed drop-kicks and stop-start game of the sixties has morphed into today’s millimetre perfect passes and gut-running footy. Players are better, fitter and smarter.

The same can’t be said for the administrators who’ve given us poor scheduling of games, seat price hikes and more of the same crappy catering. I just don’t trust them. They’re not crooks, just manipulative, but you do wonder at times if things are above board.

Take last week’s Federal Court case. For almost 12 months we’ve been fed the line that James Hird’s the bad guy. We knew the AFL investigation was flawed and were prepared to swallow a modicum of disinformation. Then we got Essendon’s submission to the Federal Court.

The new CEO, Gillon McLachlan, and his predecessor, Andrew Demetriou, don’t come out of it all that well. If the submission is to be believed, they were prepared to manipulate proceedings from behind the scenes and let ASADA play the “bad guy.”

• Tania Hird takes a hit for the sisterhood
• Why are AFL supporters abandoning the footy?

McLachlan pushed the ASADA chief, Aurora Andruska, for a report on which the AFL could base its investigation and get the whole shonky affair off its books before the 2013 final series.

In a near farcical press conference McLachlan ducked the issue and serious questions about Melbourne’s governance. The Demons were not fixers, but had merely brought the game into disrepute.

McLachlan didn’t want a “corrupted” series featuring the Bombers and the report had to be framed to justify their suspension. He and Demetriou seemingly manipulated this outcome, muted Hird and then grandstanded that justice had been done.

What a load of rubbish. There seems little justice in the AFL process and a judicial investigation may be needed to get to the bottom of what actually went on.

Revelations in the Essendon submission support this. According to Andruska’s notes, McLachlan wanted a report shaped “to get the outcome we need.” This meant “taking bits out that might compromise what we need”.

No wonder Essendon and Hird are cranky and took the matter to the Federal Court. As their submission stated: “McLachlan wanted a full report, but not so full as to interfere with his desired (disciplinary) outcome: the punishment of the EFC [Essendon Football Club] and its support staff.”

Furthermore, Demetriou wanted “two or three things out [of the report] that might compromise what we need”. As Demetriou frequently claimed, he didn’t do the injecting. He and McLachlan, however, seemed to be working behind the scenes to manipulate an outcome rather than making an informed decision based on the evidence of all involved parties.

We should’ve have expected this from the AFL. The Melbourne tanking fiasco was another example of its shonky processes. Melbourne lost games to secure draft picks. It was conducted under Dean Bailey’s tenure as coach and for the most part under Jim Stynes’ presidency. In a near farcical press conference McLachlan ducked the issue and serious questions about Melbourne’s governance. The Demons were not tankers, but had merely brought the game into disrepute.

The club copped a hefty fine, but wasn’t in a position to pay and the AFL bailed it out. You just can’t help thinking something’s crook.

In 2012 the AFL established a media unit. Employing 115 staff, the unit’s bigger than the Canberra press gallery. Its job is to publish and shape opinion on the game. Stories which once went directly from the clubs to the press now predominantly go through the unit.

McLachlan came into the AFL’s top job as a man of the people. He was going to cut the price of chips at the footy and make the game affordable for families.

Of course there’s a conflict of interest. The code’s organising body is both the administrator and a disseminator of information on its activities. How can the media unit report critically on more controversial aspects of the game, the administration and the AFL brand?

Earlier this month there was a pay dispute in the unit which brought out the manipulative culture of spin cultivated by the AFL.

According to McLachlan, the dispute was over whether the unit’s staff members were sports administrators or journalists. Confronted by 3AW’s Neil Mitchell on whether the unit was a PR or journalistic operation, McLachlan deftly side-stepped the question. The main point, McLachlan suggested, was that people were talking about footy. He couldn’t even answer a straight question on the workings of a unit in the organisation he administers.

McLachlan came into the AFL’s top job as a man of the people. He was going to cut the price of chips at the footy and make the game affordable for families. It wasn’t as ambitious as Hawke’s boast that no child will live in poverty, but it seems to have as much chance of eventuating.

The AFL’s latest flight of fancy concerns Damien Barrett’s report that Mick Malthouse will be granted the opportunity to play the team of his choice next year when he breaks Jock McHale’s coaching record of 715 games. It’s a nice gesture if it gets off the ground, but highly inappropriate, and Malthouse would be well advised to turn it down.

His administration must end the AFL’s culture of manipulation and govern for the good and integrity of the game. It’s what the players and we, the mug punters, deserve.

The AFL and not Malthouse is responsible for the draw. To suggest otherwise and have a coach determine which team he plays blurs the boundaries.

As it stands the current AFL administration has little awareness of boundaries. Whether it be the ASADA investigation or Mick’s 715th, the McLachlan administration must learn to govern within its parameters rather than blurring boundaries and attempting to manipulate decisions beyond its jurisdiction.

Collingwood president Eddie McGuire suggested next season should be the year of the fan. Eddie’s made a fortune from playing the populist, but there are more important issues requiring attention. Governance should be top of the list.

McLachlan hasn’t got off to good start in the CEO’s chair. He’s more personable than the testy Demetriou, but his administration must end the AFL’s culture of manipulation and govern for the good and integrity of the game. It’s what the players and we, the mug punters, deserve.

Dear AFL: I’m over your culture of manipulation