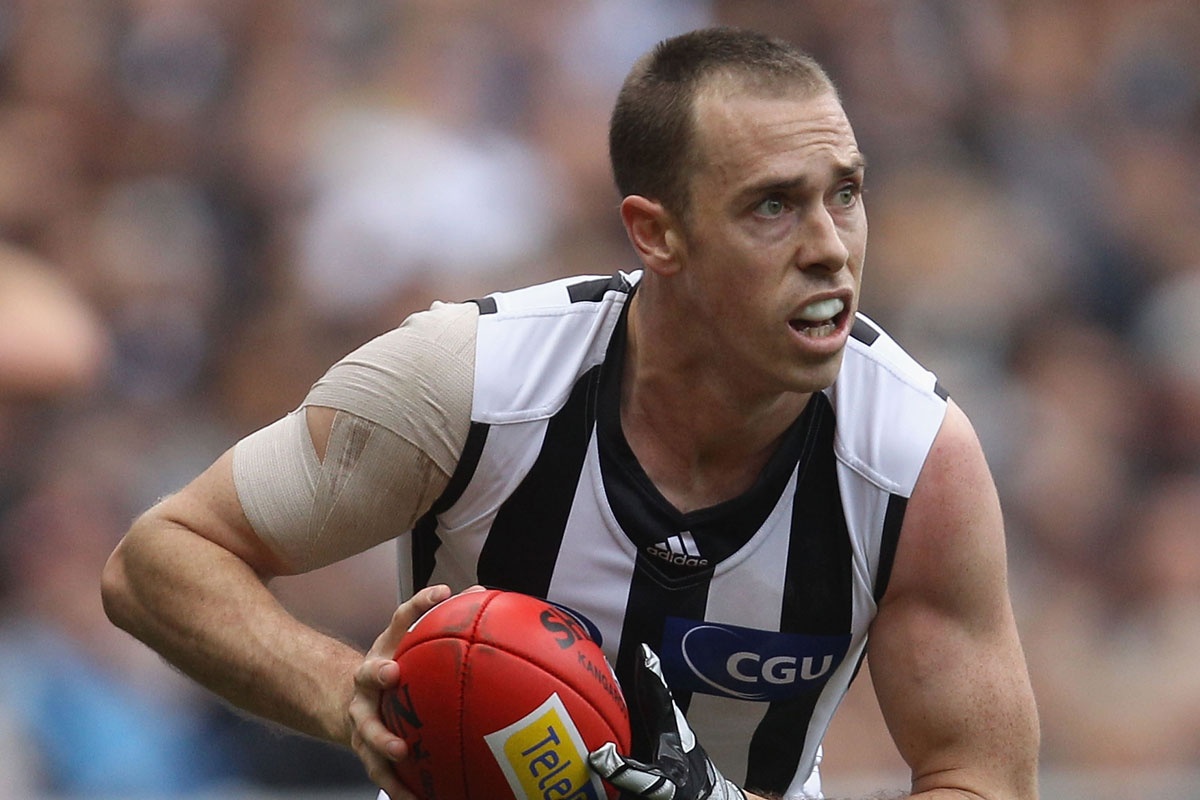 Nick Maxwell will go down as the Tom Harley of his time, a premiership captain destined to be overshadowed by more spectacular teammates.

Just as the ever-reliable Harley could never hope to compete in the pedigree stakes with Ablett, Selwood or Johnson, the Collingwood captain – who announced his retirement on Wednesday – could not compete with Pendlebury, Swan, Cloke or Didak for pure footballing chops.

He was, in the immortal words of Jack Dyer, a “good, ordinary” player.

In recent years, Maxwell’s name has been accompanied by a certain amount of grumbling in footballing circles, including from Collingwood supporters, which has always struck as being somewhat ungrateful.

Sadly, Maxwell’s last game for the Pies only reinforced the impression that he was an average payer. After coming back from a calf injury that had sidelined him for five matches, he was asked to play on Essendon’s Jake Carlisle, a vastly taller, stronger, younger player. Carlisle ended up having a “Careyesque” breakout game, plucking 19 marks and kicking four goals as Maxwell and the Magpies were monstered.

To add injury to insult, Maxwell hurt his ankle and was on his last legs as he and his beloved Pies had their metaphorical trousers lowered.

The derision of Maxwell has been compounded by the fact that much of his best football was played as the “third man up” in defence, which for the hardcore footy nuts fits just above “opportunistic forward” in the credibility stakes. Never mind that this is the role that Paul Roos made his own at the end of his playing career, and that Josh Gibson has mastered to help make Hawthorn such a power.

Maxwell might not have been a great player, but he was a great leader, a fact identified by Mick Malthouse when he promoted him to the captaincy in 2009. And the “third man up” role is a superb one for a general, who can exploit it to direct traffic and counter attack according to rules set by the field marshal. His impact in this role was righty recognised by the selectors of the 2009 All-Australian side.

This is the period that Collingwood fans would do well to remember.

In particular, as they ponder their premiership tattoos, they should ponder eight critical minutes on the last Saturday in September in 2010.

Everyone remembers the errant bouncing ball that eluded Stephen Milne and helped deny St Kilda a flag, but there were three critical acts by Maxwell in the dying moments of the drawn Grand Final that saved it from becoming another chapter in the Colliwobbles history book.

Nick Riewoldt snaps from centre half-forward. The ball is bouncing inexorably towards the goal. Maxwell sets off on a 30 metre dash, dives full length with precision timing and touches the ball within millimetres of the line. It was every bit as deparate – and vastly more important – than Heath Shaw’s celebrated “smother of the century” on Riewoldt the following week.

All looks lost for the ‘Pies as Sam Fisher pumps the Saints into attack, where Sam Gilbert was poised to take the grab. Maxwell seems several metres out of position, but, again with perfect timing, he comes from behind, flies like a latterday Billy Picken and takes a superb mark. His counter attack ends in a goal to Cloke and Collingwood is back in front.

In the frantic final seconds, Leigh Montagna boots the ball to centre half-forward for the Saints. No third man up here. It is man-on-man. Three-on-three, in fact. Maxwell is minding Justin Koschitzke, a man tall and strong enough to be a part-time ruckman. A Koschitzke mark spells doom. But Maxwell uses his judgement to make superior position. He gets first hands on the ball, Koschitzke grabs at it, but Maxwell flails like an angry child to deny him clean possession. The Magpies force a boundary throw in and the bell tolls. History beckons the following week.

That is the Collngwood player that ungrateful Magpies fans would do well to remember.

Three reasons Pies fans should be grateful to Maxwell