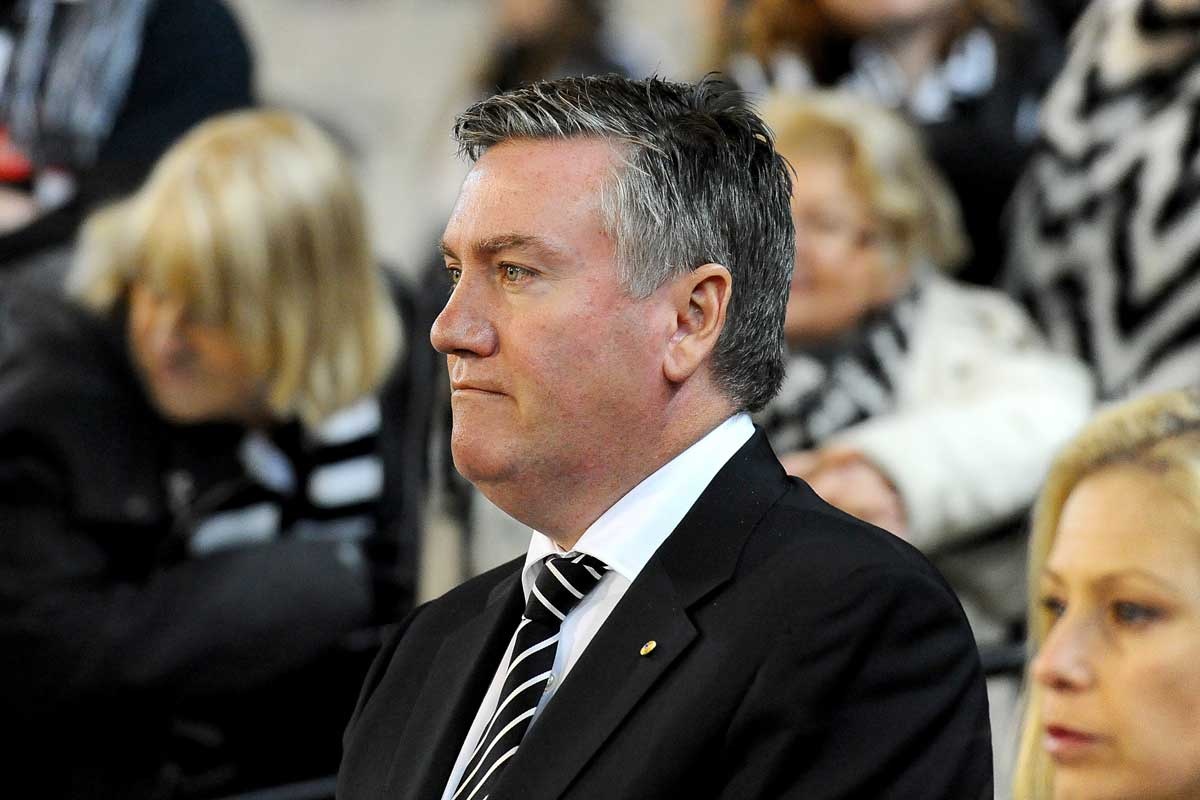 Is it time for Eddie McGuire to hang up the boots? He’s been working overtime in the past few weeks generating headlines for himself and his beloved Magpies. He likes a stoush – just look at his current blue with the Swans.

McGuire’s relations with the Sydney club have been testy since his King Kong gaffe last year. Adam Goodes and the Collingwood president no longer speak and the gaffe stung Swans’ coach John Longmire.

McGuire accused the Swans of using the club’s cost-of-living allowance to fit the Twin Towers, Franklin and Kurt Tippett, within its salary cap. The Collingwood president worked the AFL’s corridors to sink the allowance because it was unfair to Melbourne clubs. He’s since criticised the Swans for its cheque-book recruitment strategy, arguing it’s never had any interest in developing the game up north.

It is not the place of McGuire the club president to tell another club to “get stuffed” on a football show he is hosting.

According to McGuire, the Swans even tried to scuttle the GWS venture into Sydney’s west. His comment stung the Swans new president Anthony Pridham who refuted the allegation.

Soon, Eddie was hopping into the Swans over its football academy, used  to develop elite players from Sydney and regional New South Wales. It has already seen Brandon Jack progress into the Swans’ line-up.

In a rugby state such an initiative makes good business sense. It’s about spreading the game’s grassroots infrastructure into a new and competitive market, but Eddie doesn’t see it that way. He sees it as a threat because clubs in the non-AFL states get priority access to this player pool in the national draft.

The bad blood between McGuire and the Swans doesn’t end there. With the AFL trying to breathe life into the international rules format, it appointed McGuire to be the AFL team’s chef de mission. It was a shrewd move. McGuire has the media savvy to talk up a series which otherwise would attract piecemeal interest.

Swans’ coach John Longmire had been approached to take on the assistant coaching role under Alastair Clarkson, but he refused because of McGuire’s involvement. Given the Goodes controversy and McGuire’s accusations that the Swans had used the cost-of living allowance to rort the salary cap, Longmire’s response was not surprising.

But Eddie dismissed it as “petty.”  It was too much for Pridham.  Not content with running the AFL, Pridham declared, McGuire now wants to protect “the national interest”.

Pridham compared McGuire to the maverick MP Clive Palmer and his ambition to run the national agenda from a small but vocal base. It provided rich pickings for Sydney’s Daily Telegraph which featured a large cartoon of Eddie and Clive each seated on a wrecking ball.

It was brutal stuff and, not surprisingly, McGuire was put out. He accused Neil Cordy, a former Bulldogs and Swans player who penned the accompanying piece, of being a Swans spruiker. McGuire also took a swipe at his employer on Fox Footy and the Telegraph’s publisher, News Limited. It appears no one is safe when he’s on the warpath.

It’s not been too flash in the Magpie nest either. With most of the rat-pack gone and Dane Swan showing signs that he’s slowing up, the ‘Pies seem on the slide.

In criticising Cordy over a potential conflict of interest, McGuire over-stepped the mark. Afterall, Cordy is not the president of the richest AFL club, nor does he front popular breakfast radio and footy television programs. For McGuire to pull a conflict of interest stunt on Cordy is a bit rich.

Clearly, McGuire’s twin roles as media commentator and president of an AFL club are in conflict. McGuire should have reflected on this before criticising Cordy. Pridham made the important point forcefully when he suggested McGuire’s media and footy administration roles had become “blurred.”

In truth, they have been for a long time. It is not the place of McGuire the club president to tell another club to “get stuffed” on a football show he is hosting. McGuire was using his role as a media commentator to promote, indirectly, Collingwood’s interests.

By any measure, Eddie, who’s given wonderful service to his club and the game, has had a bad media year. It’s not been too flash in the Magpie nest either. With most of the rat-pack gone and Dane Swan showing signs that he’s slowing up, the ‘Pies seem on the slide.

Their president’s media brawl with the Swans has diverted attention from the team’s sudden slump in form. Maybe, just maybe, that’s the point.