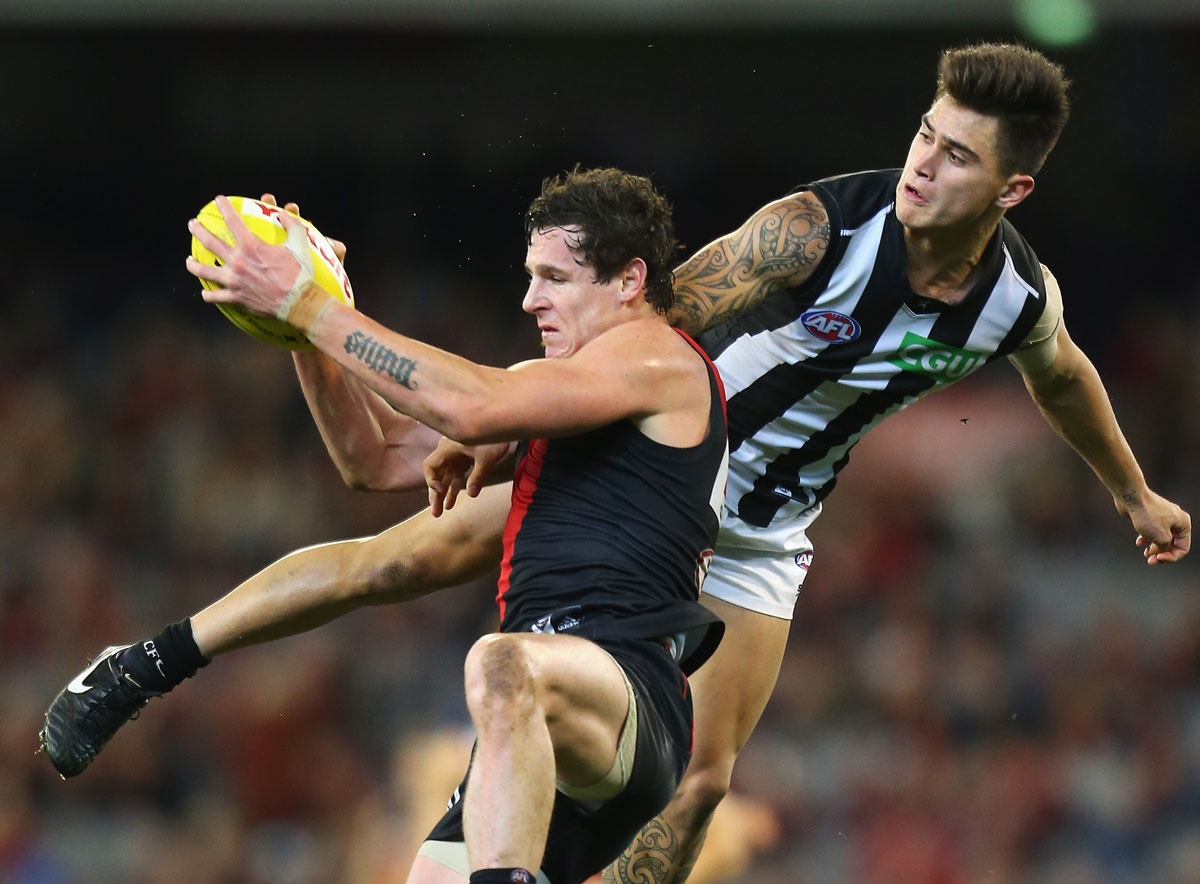 Collingwood began haemorrhaging a month ago. Today, it is officially in crisis, or at least that is how it will be interpreted around the water coolers of the country.

Through round 12, the Magpies were 8-3 and in the top four. Five weeks on, defeats by Gold Coast, the Bulldogs, Hawthorn and then a 10-goal thrashing today by an Essendon team sans Jobe Watson and Brendon Goddard puts Nathan Buckley’s team tumbling to eighth and in grave danger of missing the finals.

All of Collingwood’s strengths of the first half of the season have dissipated. The Magpies cannot score; they are 12th on the points-for table and managed just five goals against the manic Dons. Travis Cloke went into the game with a bout of gastro and might better have been served by standing out, such was his inability to influence the game; beyond Cloke, the Pies have little up forward.

President Eddie McGuire was among those who spoke in the private post-mortem, and said on television that the club had “let our supporters down”. McGuire also was furious at the 3.40pm scheduling, which he blamed for the moderate 58,992 crowd, saying he would “never, ever, ever again” support such a time slot.

Nathan Buckley has the bye weekend to ponder how to arrest the downward momentum before an encounter with Adelaide that has turned into a season-shaper. The fact former skipper Nick Maxwell broke down again on his return from injury scarcely helps, although Ben Reid and Alex Fasolo have resumed in the VFL.

As for Essendon, it has leapt from 10th to seventh on the back of a brilliant win in Adelaide then the comprehensive win over the Pies, which was led by Dyson Heppell’s smooth moving in the middle and Jake Carlisle’s astonishing Careyesque 19-mark, four-goal game up front (see one of his best marks in the video below). It was a performance that paid no mind to the absence of leaders like Watson and Goddard, nor the stench of the ASADA show-cause notices and an impending Federal Court case to challenge the drug agency’s investigation.

Mark ‘Bomber’ Thompson stubbornly insisted that Carlisle play as a forward, and has been roundly criticised for that. But it was a good day for Thompson, whose switch of Jason Winderlich to a running back role in the past fortnight has been a masterstroke.

As Collingwood has found, a month is a lifetime in footy, and Port Adelaide has suffered a similar puncturing. The Power was two games clear at the top of the ladder at the end of round 12. Since then it has lost three of the past four games, reaching a low with a defeat by Richmond at Etihad Stadium and dropping out of the top four.

The Tigers are such a tease. This was their third win in a row now that their chances of reaching the finals have gone; it is as though they cannot stand prosperity. But Damien Hardwick’s team was tough and hard in close, winning the contested ball count by more than 30, and the likes of Alex Rance (keeping Jay Schulz to two goals) defended well enough to hold Port to a beatable score.

Former Port defender Troy Chaplin was swung forward late in the third quarter and promptly kicked two goals against a career total in nine seasons of one, celebrating with appropriate passion and drawing ire from his former teammates. Chaplin said later he had merely gone forward to mark Justin Westhoff, who had been placed behind the ball by the Power, which is the way it falls for Richmond right now. A defensive move became a matchwinner.

Worth noting from the game also is that Travis Boak (39 disposals) is a superstar and a great leader; if Gary Ablett has not polled enough votes to win the Brownlow Medal then Boak is at the head of those who might challenge him, with three votes against the Tigers as a starting point.

But Port’s irresistible running game of the first half of the season has largely gone, and the Power look terribly fatigued.

The constants in a changing scene are Sydney and Hawthorn, and the swooper is Fremantle, which leapt to second on the table after handling Greater Western Sydney at home. At this moment, the premier would surely come from that three, with a watch-notice on Geelong and Port.

The Swans were subdued early by Carlton at the SCG, but they have an explosive capacity not apparent in their previous great teams of the past decade; 10 third-quarter goals including five from Lance Franklin did the trick for a 12th consecutive win, equalling the club record set in 1935.

Franklin kicked six, has 48 for the season and is playing his best football since 2008 at Hawthorn, while another ex-Hawk, Josh Kennedy, broke the all-time AFL record with 29 contested possessions, a beast at work.

The Hawks, meanwhile, continue to show remarkable resilience in hanging on to a top-four spot, beating Adelaide on the road despite the absence of Cyril Rioli, Brad Hill, Brad Sewell, Josh Gibson and Brian Lake.

The AFL’s timekeeping problems continued when field umpire ‘Razor’ Ray Chamberlain signalled the end of the third quarter three seconds before time had run out. Chamberlain had switched the volume up on his earpiece so that he could hear the chime that is meant to alert him above the crowd; ultimately it made an unusual sound that triggered his decision to whistle and stop play as Luke Breust headed for goal. The league seems to have made this all terribly difficult, far trickier than it ought to have been.

Fremantle’s win in Perth was marred by the report of Hayden Ballantyne for knocking Thomas Bugg down off the ball. While Ballantyne was superb again with the football, this will be regarded seriously by the Dockers and coach Ross Lyon, for the small forward has already been suspended for two off-ball incidents earlier this season.

A club suspension might well be considered, because Ballantyne has already been suspended four times since 2012. Notwithstanding that, the Dockers have won eight straight and are looming as a premiership chance.

Gold Coast’s first taste of life without Gary Ablett was bitter, leaving the Suns out of the top eight. The Suns were overwhelmed by a Western Bulldogs team in Cairns that is beginning to show the signs of a renaissance under Brendan McCartney. In the pulsating final quarter it was youth in the form of Jack Macrae, Nathan Hrovat and Jake Stringer providing the big goals, and Macrae, benched for poor defensive intensity last weekend, played a blinder.

St Kilda’s early promise has disappeared, and the Saints were flogged by North Melbourne in Hobart. The game saw a remarkable performance by the 36-year-old Brent Harvey, who with 378 games under his belt is in all-Australian form. Harvey has not committed to next season but surely soon will; moreover Michael Tuck’s AFL record of 426 games may not be beyond him, given that he can potentially slide into the role of the substitute if he begins to show signs of wear.

Similarly Melbourne was roadkill for Geelong at the MCG. The Cats have a friendly draw, are back in the top four, and continue to hang tough against the top three.

Carlisle ‘does a Carey’ as Pies crisis deepens