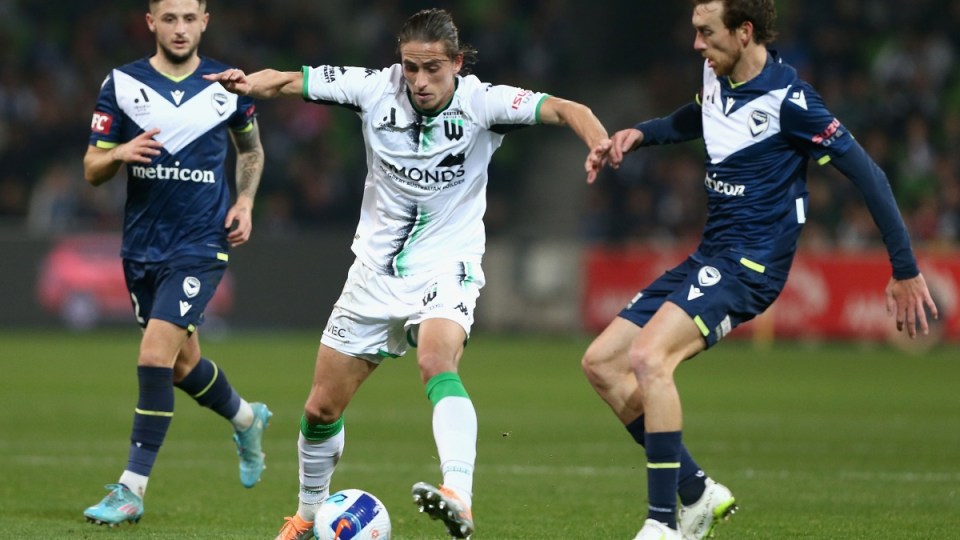 Lachlan Wales scored the winner for Western United to knock out Melbourne Victory from the Australia Cup. Photo: AAP

Defending A-League Men champions Western United has started its new season with a win after knocking Melbourne Victory out of the Australia Cup with a 2-1 win at AAMI Park.

Locked at a goal apiece after Jake Brimmer cancelled out George Timotheou’s opening own goal, Lachlan Wales turned matchwinner in the 67th minute when he netted with United’s first official shot of Wednesday night’s clash.

John Aloisi’s team will now advance to the Cup’s round of 16 for the first time, while Victory will turn to their ALM season opener against Sydney FC on October 8.

In what was a battle of the reigning ALM champions against the defending Cup holders, it was the latter that had the best of the early chances.

It'll go down as an own goal but it's the reigning @aleaguemen Champions who lead at AAMI Park 🔥#AustraliaCup is live NOW on 10 Play 📺 pic.twitter.com/kZ3QO5GGoa

But Victory was made to regret its inability to convert after Wales found space on the right in the 24th minute and whipped in a cross that Timotheou rather needlessly slid to block away and, in doing so, poked it into the net.

Letting a Jay Barnett pass run across his body before lacing a thunderbolt into the top corner of the net, Brimmer restored parity in spectacular fashion three minutes into the second stanza.

Is this the goal of the tournament?#AustraliaCup is live NOW on 10 Play 📺 pic.twitter.com/OpCzNPL1hK

But United finally registered a shot and retook the lead in the 53rd minute when Ben Garrucio drove a pinpoint low cross across the face of goal for Wales to convert.

Brimmer attempted a second spectacular equaliser with a volleyed effort in the 67th minute only for it to sail just over the bar.

Victory launched a full attack in search of a leveller as time wore on but United survived to eke out the win over its local rivals.

Unfortunately for both teams, neither escaped the game with a clean bill of health, with Barnett and Leo Lacroix both subbed off with injuries.

Western United too strong for Melbourne Victory in Australia Cup