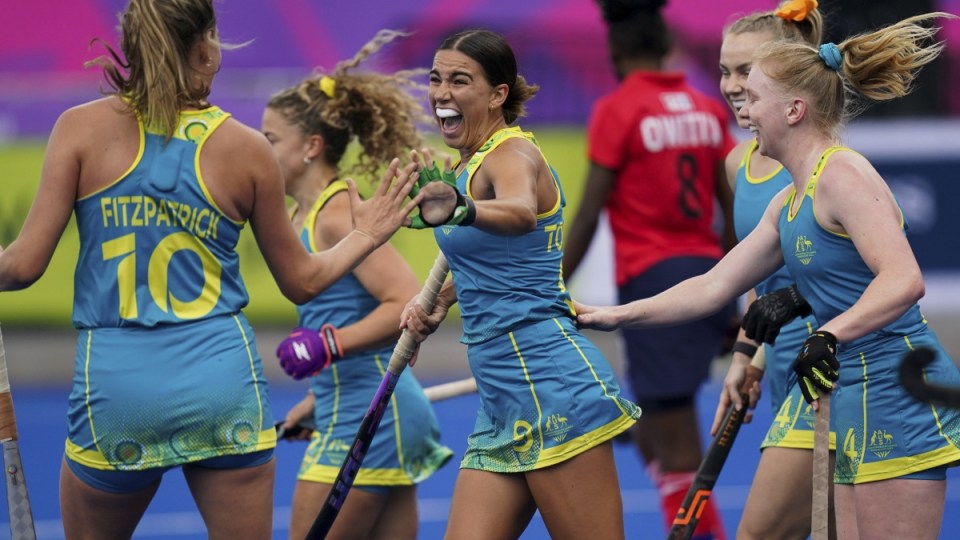 Shanea Tonkin scored the Hockeyroos' second goal in their 2-0 win over Scotland on Wednesday. Photo: AP

A year after India broke Australia’s hearts at the Tokyo Olympics, the Hockeyroos will attempt to turn the tables on the road to Commonwealth Games gold.

India pulled off one of women’s hockey’s all-time great boilovers to beat the Hockeyroos 1-0 in the Tokyo quarter-finals last August.

In Friday’s semi-final, it will again stand in Australia’s way.

Australia is top of group B after beating Scotland 2-0 on Wednesday to seal a perfect group stage, while India progressed as group A runners-up after defeating Canada 3-2.

A perfectly placed shot gets the @Hockeyroos on the board just before half-time.#B2022 pic.twitter.com/q3TYAOoTjD

“There are five or six of us who have heartache from four years ago (losing the final to New Zealand) and obviously a few more who went to Tokyo.

“For us it’s definitely a bit of a motivator, but we’re in a transition period now – it’s more about what we’re doing now as a group to give everyone the confidence they can to play their best hockey every single game rather than dwelling too much on what’s happened in the past.

“For some of us who were there for sure that’s a bit of motivation, but we don’t like to transition that onto the younger players because we just want them to be full of confidence going into the games.”

The Hockeyroos should enter the clash high on confidence after manoeuvring through the group stage without conceding a goal, courtesy of their miserly defence and intense press.

They have also scored 16 goals in four games, though arguably should have added plenty more given the wealth of chances they have created.

Defender Karri Somerville was confident Australia’s attack would continue to flow towards their push for Games gold.

‘‘We’re just sticking to our processes, doing the same thing every game, backing each other up, we’re trying to get our triangles going,’’ Somerville told reporters.

‘‘We know if we play our way that we will be able to rip apart anyone.’’

In a rainy start to Wednesday’s clash at Birmingham University, breaking down Scotland’s hard-working defence proved a difficult task.

Australia didn’t break through until two minutes before half-time, when Grace Stewart turned her opponent inside out and coolly stroked the ball into the bottom corner.

The Hockeyroos peppered Scotland’s goal without reward until the start of the fourth quarter when Greta Hayes burst forward and picked out Shanea Tonkin, who finished with aplomb.