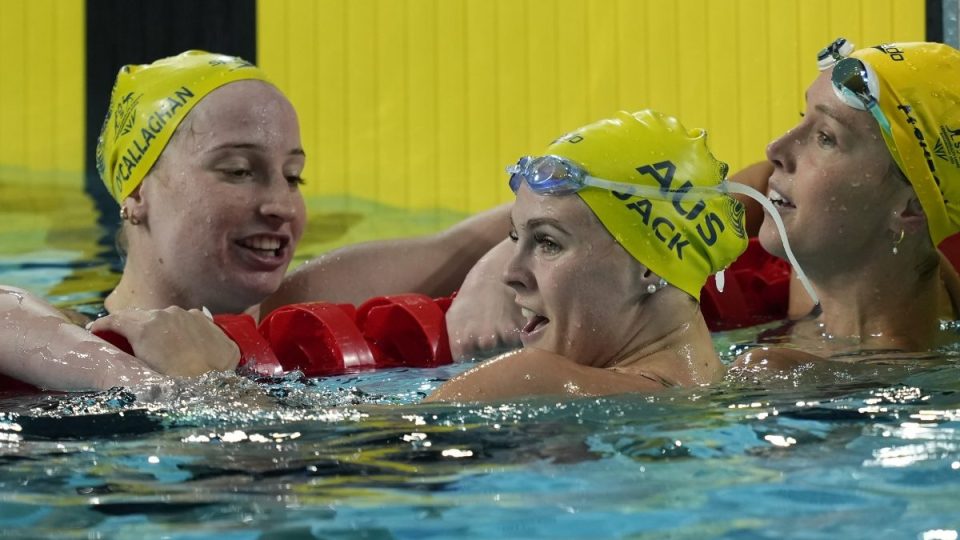 It was an all-Australian podium after the 100-metre freestyle. Photo: AAP

Rising star and world title holder Mollie O’Callaghan can also call herself a Commonwealth Games gold medallist after leading an all-Australian finish in the 100-metre freestyle on Wednesday morning.

The 18-year-old took top spot on the podium alongside Shayna Jack.

O’Callaghan was even too fast for the new Games record holder and her “idol”, Emma McKeon, who came third.

“Especially Emma. She is an absolute idol so it is really nice to race alongside her at this time.

“And especially Shayna Jack too.”

Another 18-year-old swimmer, Elizabeth Dekkers, has also joined the list of gold medallist.

She won the 200-metre butterfly ahead of England’s Laura Stephens.

Elsewhere, Eileen Cikamatana has dominated to win Australia’s first gold medal in weightlifting with a record performance in the 87 kilogram class.

Young gun Kate McDonald pulled off the performance of her life on the beam to take gold on a day Australia’s artistic gymnasts claimed five medals.

And Aoife Coughlan put on a show in front of her family to claim a win in her judo event, the seventh medal for Australians inside Coventry Arena in the past two days.

Australia’s medal count stands at 104, including an impressive 41 Gold.

Second in the tally is England, with 79 medals, followed by New Zealand at 26.

Here’s the latest on our wins.

O’Callaghan came from fourth at the turn to triumph ahead of Jack and McKeon.

O’Callaghan, the world champion, was 0.40 seconds behind at the midpoint but won in 52.63 seconds.

Jack (52.88) and McKeon (52.94) completed an Australian clean sweep  after their teammate Dekkers captured gold in the butterfly.

The 18-year-old Dekkers was shocked to join the Dolphins’ golden list.

“It’s a bit of an unreal feeling,” she said.

“I never expected it … it feels amazing, so good to execute that race just when I needed to.”

Dekkers produced a last-lap surge to power past England’s Laura Stephens – the Australian was 0.01 seconds behind at the final turn but won by 0.64 seconds.

Woodward, in the men’s 200-metre backstroke, was pipped by just one-hundredth of a second by England’s Brodie Williams.

In the men’s 100-metre butterfly final, Temple finished in a dead-heat for second with England’s Guy Temple.

Cikamatana, 22, set a Games record of 110 kilogram with her second attempt in the snatch.

She then took the overall lead with her first clean and jerk attempt of 129 kilogram.

Cikamatana’s second lift of 137 kilogram won the gold medal, as well as setting the clean and jerk and overall Games records as well.

She capped her outstanding win with a third lift of 145 kilogram, giving the Australian a total of 255 kilogram.

Cikamatana won gold for Fiji in the 90 kilogram class at the 2018 Games, but switched to Australia after a dispute with the national federation.

Earlier on Tuesday, compatriot Ebony Gorincu was left frustrated after an eventful morning only gave her sixth place in the 76 kilogram class.

Gorincu, 32, a former athletics sprinter and bobsledder, managed just one successful lift in the 76 kilogram clean and jerk.

But the judges scrutinised her first lift of 113 kilogram for several minutes before giving it the all-clear.

Gorincu then tried 119 kilogram, but when the bar landed awkwardly on her chest in the clean movement, she had to drop the weight before quickly loosening her belt because of dizziness.

A doctor briefly checked on the Australian, who was unhurt.

Gorincu then failed with her third and final lift, also at 119 kilogram, for a total of 206 kilogram after reaching 93 kilograms in the snatch.

He lifted a total of 316 kilograms as Samoan Don Opeloge set a Games record of 381.

McDonald edged superstar teammate Georgia Godwin, who won her fifth medal in Birmingham, for her breakthrough gold while Emily Whitehead won bronze in the floor.

Tyson Bull claimed silver in the high bar after initially failing to qualify for the final, while James Bacueti claimed bronze in the vault.

It took Australia’s gymnastics medal total to nine, after Godwin had earlier claimed two gold, a silver and team silver.

Godwin looked poised to claim her third gold in Birmingham when she laid down 13.433 first-up.

“She put up the performance of a lifetime when it counted, so she deserves the gold,” Godwin said.

“I just tried to put everything on the table and wow, what a result,” McDonald said.

Godwin concludes her campaign with all-around gold and vault and uneven bars, beam and team silver.

Her five medals in Birmingham and three on the Gold Coast make her Australia’s equal-most decorated women’s artistic gymnast, alongside Allana Slater.

“It’s an actual honour. Allana is an incredible gymnast. She’s been messaging me congratulations,” Godwin said.

“So to be up there with her, it’s going to take some time to sink in.”

Bull’s high bar routine scored 14.233, which was only surpassed by the final competitor, Cyprus’ Ilias Georgiou (14.466).

Bull, who finished fifth at the Tokyo Olympics, bombed out in his pet discipline in Birmingham, finishing 13th in the team event and individual qualifying due to a poor landing.

He earned a reprieve when Jesse Moore withdrew with a shoulder injury and Clay Mason Stephens opted out to open up a spot.

“Clay Stephens having the biggest heart in the world, (it was) just such a selfless act for him to offer that spot to give me a chance on my pet event,” Bull said.

“There’s no chance I was making the same mistake twice. I was gonna put it on my feet no matter how much it hurt.”

She was penalised for stepping outside the line, a 0.100 deduction that ultimately proved the difference between silver and bronze.

Morgans and Bull finished fifth and eighth respectively in the parallel bars.

Two weeks after hanging tough to win the bronze medal at the world championships in Eugene, Kennedy did it much easier at Alexander Stadium.

Australians have now won the women’s pole vault on six of the seven occasions it has been contested at Commonwealth level – a sequence broken only when Canadian Alysha Newman saluted four years ago on the Gold Coast.

The West Australian soared over 4.60 metres at the second attempt.

To the delight of the crowd, Kennedy then defied tricky windy conditions to have three unsuccessful cracks at what would have been a new Commonwealth record of 4.76 metres.

Molly Caudery from England claimed the silver on countback ahead of New Zealand’s Imogen Ayris after both cleared 4.45 metres.

The first Australian to win a medal in the 2022 Games at Alexander Stadium was para-athletics sprinter Rhiannon Clarke who was third in the women’s T37/38 final won by Olivia Breen from Wales in 12.83.

“I knew I had to pick up the pace and push here, make sure I was ahead of the game and make sure she made some mistakes,” Coughlan said of Jamaica’s first judo Games medallist.

“She is a very tough fighter but I got there.”

Coughlan could finally break focus and celebrate with her family in the stands, some of which had never seen her fight live before.

“The atmosphere in here has just been insane,” she said.

“It’s amazing to have them here.”

Jake Bensted was even more efficient, taking just 73 seconds to beat Northern Island’s Joshua Green and collect a second bronze to go with his third in Glasgow.

The Australian wasted no time in the medal fight, successful with the shime-waza to strangle Green and force a submission.

Nikolic looked a beaten man early in his 81kg fight with Eoin Fleming but avoided ippon and then overcame the limping Northern Irishman, who bravely fought deep into golden score despite a right leg injury almost reducing him to tears.

German-born Haecker was disappointed with a mistake in her semi-final loss that robbed her of a gold medal shot.

“I’m definitely not happy with the bronze, I was coming here to win gold but that plan didn’t work out,” she said.

“She (semi-final victor Gemma Howell) strangled me, I was looking out for a different technique but she surprised me, very well done.”

Haecker, whose father is Australian, has established a dojo in Melbourne for the country’s best players

“We have a really good group now and more results are coming very soon for us,” she said.

“I love Australia, I feel very Australian. I’m proud to be German and Australian but I love to represent Australia.

“They gave me a chance to represent Australia and I will forever be grateful for that.”