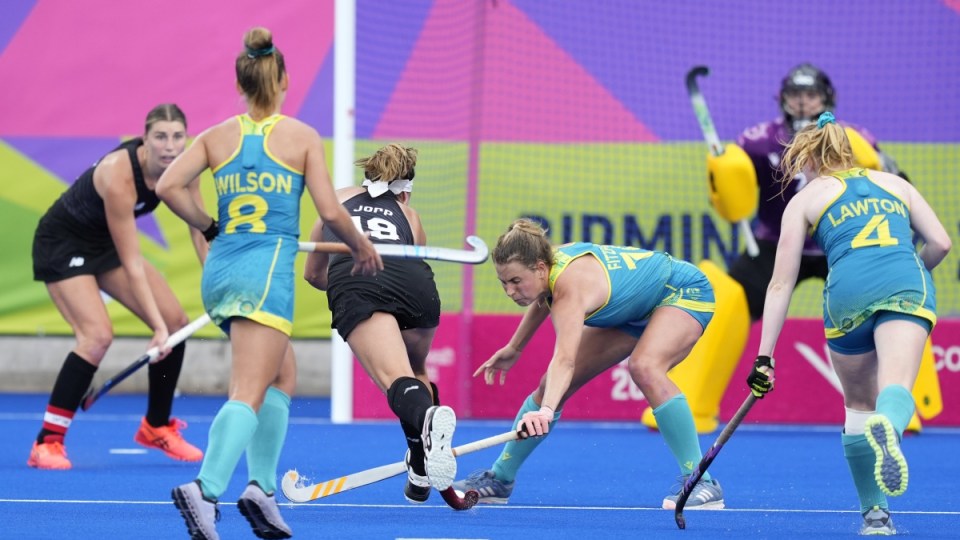 They boast a 14-0 scoring record after three games but, on a Commonwealth Games revenge mission, the Hockeyroos want to be more clinical after sneaking past New Zealand.

Australia won 1-0 on Tuesday morning at Birmingham University, thanks to a first-quarter Kaitlin Nobbs penalty stroke – her fifth goal of the tournament – in a match-up of the 2018 Games final.

The Kiwis won gold on the Gold Coast but an improved Australia, fresh off an impressive bronze at last month’s World Cup, now boasts the psychological edge in what could still prove to be the gold medal game later this week.

Victory followed 8-0 and 5-0 defeats of Kenya and South Africa respectively, Australia unable to create a larger buffer despite having 31 circle penetrations to 14.

The @Hockeyroos get a little bit of revenge over the Black Sticks with a 1-0 win 👏#B2022 pic.twitter.com/0C8sOdBhZR

“We’ve played them plenty of times over the past few years and every time against them is hard, very physical and we’re both going at each other the whole game,” said Grace Stewart, who celebrated her 100th cap.

“We find we have a lot of possession, but we’re trying to win more penalty corners, more field goals is definitely the aim.

“The girls coming off the field are like ‘We moved the ball so well today, passing around’.

“It’s just that final finishing touch we’re going to try and nail in the later games.”

Nobbs began the tournament with just four career goals but has scored from all three penalty strokes she has taken during the Games.

Jane Claxton chats to @MyleeHogan after the @Hockeyroos' victory over the Black Sticks 🏑#B2022 pic.twitter.com/uFQSGND6Jm

One of four to bring up 100 games during the tournament, Nobbs said the team’s glut of milestones hadn’t made them any less special.

“We’ve only got one (100-game milestone) more after this,” she grinned.

“Trinny’s (coach Katrina Powell) emphasised that we have a bit of focus on what their strengths are, what they’ve brought to the team and doing it a bit more for them.

“So we’ve had that extra bit of oomph to get the win for them.”

Australia faces Scotland on Wednesday, needing a win to guarantee top spot in their pool.

The Kookaburras complete their group stage action against South Africa on Wednesday night.