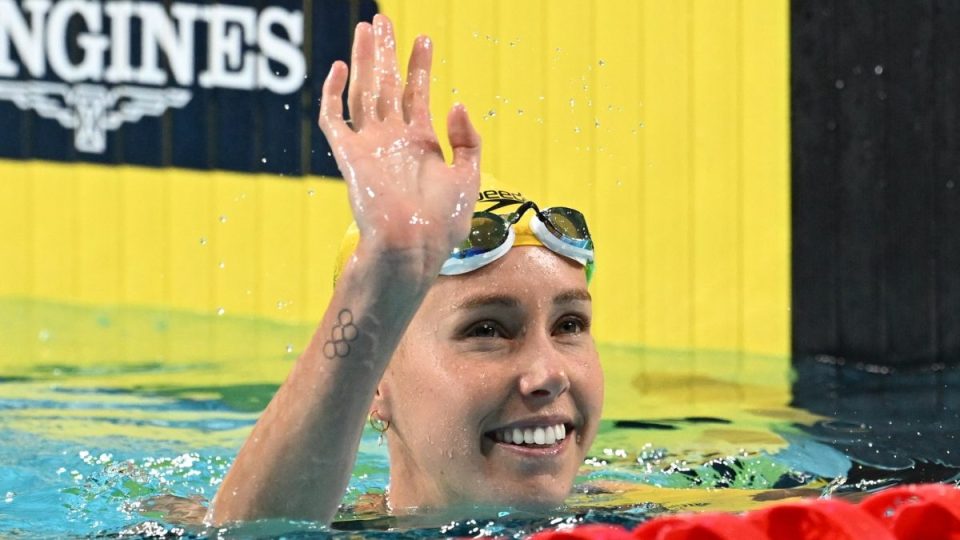 A triple triumph for women in the velodrome, a cyclist’s sprint, and brilliant beam work secured Australia five more gold medals by nightfall on the third day of the Commonwealth Games.

It has just been confirmed swimmer Emma McKeon is the greatest Commonwealth athlete in history after she broke a record with another gold medal.

Australia’s silver and bronze count has continued as well – thanks to an athlete’s comeback from a high-speed crash and triathletes capitalising on the familiar heat during a break in drizzly conditions.

The successful day was not without drama.

There was a spectacular pile-up involving an Australian rider and a rival who was catapulted over the barricade and into the crowd.

Poolside, fellow swimmers expressed “heart break” for Kyle Chalmers who was upset by the media coverage of his relationships with teammates including his ex, McKeon, whose record-breaking swim showed she would not be distracted by gossip.

Here’s a wrap of the latest Games news, from reporters who caught all the action in Birmingham and London.

Masterful McKeon our most successful

McKeon, 28, has the most number of medals of any athlete in Commonwealth Games history.

“It’s really nice to be mentioned alongside some of those names and I will be part of that history for years to come, hopefully,” McKeon said.

“They’re the ones who inspired me when I was young. I remember watching them on TV and that lit the fire in me to be where I am now.”

McKeon previously collected four golds medals at both the 2018 Gold Coast Games and the 2014 edition in Glasgow.

“It is special. It makes me reflect on the last eight years since my first Commonwealth Games,” she said.

“I can see how far I’ve come as a person and an athlete.

McKeon has the chance to add more gold to her Birmingham haul with expected swims in four more events – about 50 minutes before her record-breaking freestyle, she was quickest qualifier for the 50-metre butterfly final.

She is also Australia’s most decorated Olympian with 11 medals – five gold, two silver and four bronze.

And her landmark Commonwealth gold in the 50-metre freestyle came in an Australian medal sweep with Meg Harris taking the silver and Shayna Jack the bronze.

Baker, already a champion in the team pursuit, took her second crown in three days with a masterful performance in the marathon 100-lap points event on Sunday.

Then Clonan, the last rider to go, blasted through the two laps of the 500m time trial to snatch victory by just six-hundredths of a second from her Canadian rival Kelsey Mitchell, recording a blistering Games record of 33.234 seconds.

They followed another victory for the tandem team of Gallagher and Ward in the 1000-metre time trial for blind and visually impaired cyclists with a sighted pilot.

Gallagher and Ward, already crowned sprint tandem B champions on the opening day of the program, added the 1000-metre time trial title in emphatic style.

And their fellow Australian para-cycling duo, Beau Wootton and sighted pilot Luke Zaccaria, then landed the bronze in the tandem B sprint, defeating Welsh pair Alex Pope and Lloyd Steffan.

It was a top effort for Glaetzer who was cleared to ride only hours before the race after suffering a suspected broken collar bone.

There had been fears the Games might be over for Glaetzer following a 70km/h crash that concussed England’s Joe Truman.

Catapulting into the crowd

The spills continued on Sunday and there are serious questions being asked about rider and spectator safety.

Olympic champion Matt Walls needed stitches after he flew over the barriers and into the crowd in a multirider pile-up in the final lap of the 15-kilometre scratch race qualifier.

Walls’ trouble began when he tried to avoid New Zealander George Jackson and Australia’s Josh Duffy, who had come off their bikes split seconds before.

Two other riders – the Isle of Man’s Matt Bostock and Canada’s Derek Gee – were also taken to hospital.

Gee also surfed the top of the barrier but managed to avoid following Walls in the stands, albeit then falling heavily once back on the banking.

Spectators were also treated, including one who was covered in blood and wheeled away in a wheelchair.

Canadian Mathias Guillemette was disqualified from the race for causing the initial crash.

“Following medical treatment in hospital, Matt Walls has been discharged with stitches in his forehead, scrapes and bruises but thankfully no major injuries.

“We send our best wishes to all other riders and spectators involved in the crash and thank the medical teams for their expert care.”

A 22-12 victory for the women’s rugby sevens side, earned after a thrilling semi-final defeat of New Zealand, was sweet after an extra time loss in the team’s debut on the Gold Coast four years ago.

And it continues their resurgent 2022 form that has included a World Series title.

Faith Nathan scored two first-half tries and when Madison Ashby ran onto a pass it was 17-0 on half time.

Maddison Levi then scored her 10th Games try to allow a comfortable buffer for Tim Walsh’s side, which has rebounded spectacularly since missing the podium at its Olympic title defence in Tokyo last year.

Program mainstay Charlotte Caslick was typically central, snuffing out Fijian attacks and marshalling Australia’s offence in a continuation of the form that led to her being crowned player of this year’s World Series.

The win followed the men’s side’s fourth-place finish, New Zealand too strong in a 26-12 bronze medal playoff earlier on Sunday.

A brilliant beam performance, where Godwin put in a competition-high score of 13.750 as English stars Alice Kinsella and Ondine Achampong faltered, teed up the victory

Then the 24-year-old sealed gold with a strong routine on the floor to the tune of Feeling Good.

Godwin was the third-highest qualifier after Kinsella and Achampong, who were coming off helping England claim team gold ahead of Australia.

The Australian was fifth after scoring 13.300 on the vault.

But an outstanding uneven bars routine with a perfect landing delivered a score of 13.550 and lifted the Australian into third, 0.700 off leader Kinsella.

Then the competition opened up when leader Kinsella fell off the beam, failed to complete her routine and went over time.

The 21-year-old, who is also the defending beam champion, was distraught and slumped in a corner of Birmingham Arena after her score of 11.000 appeared.

Godwin capitalised, completing a brilliant routine by dismounting with a double somersault in the pike position to earn a score of 13.750 and leap to the top of the leaderboard, ahead of Canada’s Emma Spence.

Achampong then also fell off and recorded a score of 12.500, further opening the door for Godwin to triumph.

Godwin then sealed the deal with a score of 12.900 on the floor.

Brenna Kean continued an encouraging beginning to her fledgling weightlifting career, coming in fifth in her event.

The Australian, who has been lifting for only just over a year, went all out with a final attempt at 114 kilograms in the clean and jerk section of the women’s 59-kilogram category.

It would have been enough to move her from fifth into the medals, but she failed to get the bar up with what would have beaten her previous best-ever lift by six kilograms.

In the earlier snatch section, Kean was unsuccessful with her first attempt at 83 kilograms. She controversially succeeded with her third attempt at the same weight as she poked her tongue out in delight.

The path to Olympic glory?

Australian triathlon authorities have set an ambitious target of returning to the podium at the Paris Olympics after a medals stepping stone at the Commonwealth Games.

This year’s revelation, Sophie Linn, collapsed at the finish on Sunday after anchoring Australia to bronze at the Commonwealth Games mixed team relay.

It followed Matt Hauser’s bronze in the individual race two days ago and Linn’s fifth in the women’s race.

Once the nation to beat in triathlon, Australia has dropped away badly. Erin Densham’s bronze in London was its most recent Olympic medal.

But after the disaster of the Tokyo Games, where the Australians were well off the pace, team boss Justin Drew said they were back on track.

“One of the things you have to look at is it’s OK to be ambitious,” Drew said.

“Why shouldn’t we be there?

“Tokyo was the anomaly in the relay and there are a number of reasons for that. Now it’s about Paris.”

Australia, which won this event four years ago and finished second in a world series race earlier this month, was off the pace as England took control early.

But after dropping to sixth midway, Hauser and Linn brought the Australians home with storming legs.

Jake Birtwhistle, Natalie Van Coevorden, Hauser and Linn finished 49 seconds behind the English, who won in one hour 16 minutes 40 seconds.

Linn outsprinted Non Stanford two days ago, but the Welsh great turned the tables on Sunday to finish three seconds ahead and claim silver.

Linn’s teammates supported her after she slumped to the ground and she recovered quickly.

Given Hauser’s form, the question will be asked whether he should have started the relay, not Birtwhistle.

But Drew backed the relay order.

“The advantage of putting Matt in the third leg was the different scenarios we could then account for,” Drew said.

“From a strategic perspective, that’s the way we settled on as a team.”.

Light rain made conditions difficult for the para triathletes, particularly for the unwieldy tandem bikes, and the Scottish team crashed heavily in the men’s race.

But as Van Coevorden noted, conditions improved noticeably for the relay in the afternoon and the heat suited the Australians.

Chalmers has blasted media for “clickbait” reporting of his relationships with Dolphins teammates Emma McKeon and Cody Simpson.

Chalmers and McKeon dated last year but have since broken up.

McKeon is now going out with Simpson.

Chalmers said media reports of a fractured love triangle were “false news”, adding the adverse attention could force him from the sport.

And he should know, having been under an intense spotlight when dating fellow swimmer Emily Seebohm.

The two were a couple for almost three years before an acrimonious split in 2018.

“It wasn’t just last night, he (Chalmers) has expressed that a few times to me,” Larkin said on Sunday.

“I even spoke to Isaac Cooper and he said he was pretty much at rock bottom as well.

“I have been there. And it breaks your heart.”

Larkin, a 29-year-old triple Olympian and former member of the Dolphins’ leadership group, will again reach out to Chalmers.

“This [swimming] is something that should be fun and you should enjoy,” he said.

“You need to support them and make sure you are doing everything to make sure they are in a good place because we always say a happy swimmer is a fast swimmer.

“He knows he has got my support, for sure.”