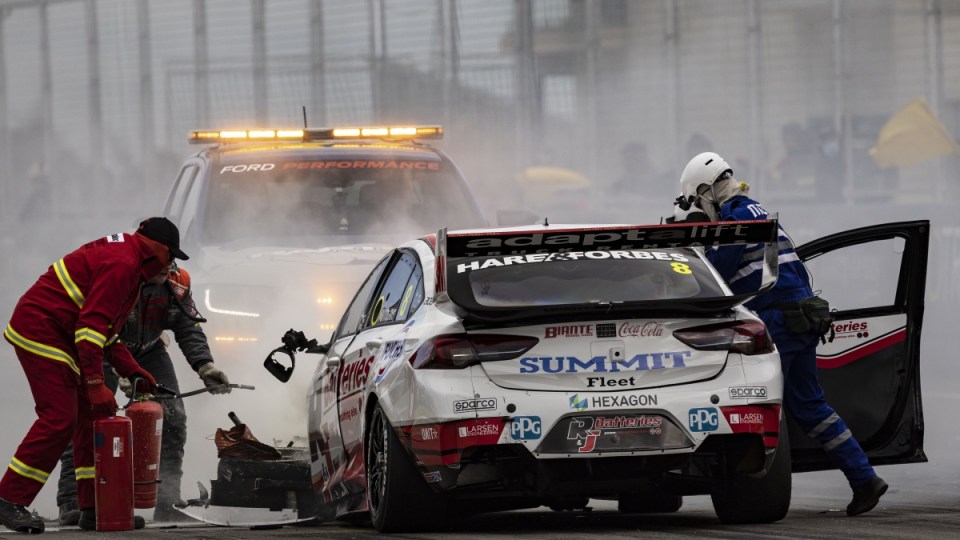 Shane van Gisbergen has claimed a Tailem Bend clean sweep, lengthening his Supercars winning streak to five and positioning himself for back-to-back titles.

The Kiwi superstar looks nailed on for another championship after showing nerves of steel at the weekend’s meet in wet and wild conditions.

In the early afternoon contest, Van Gisbergen outsmarted the field in a shortened race owing to an ugly lap-one crash.

Thomas Randle, who qualified second, was unable to get off the front row due to suspected clutch failure.

Andre Heimgartner, unsighted, surged from the sixth row and smashed into Randle’s Mustang, a sitting duck, at around 120km/h.

Both cars were reduced to write-offs and the drivers missed race 23, transported to hospital for precautionary scans.

“I’m rapt the drivers are safe and healthy. It’s a testament to the sport and what we do in safety.”

At the restart, Chaz Mostert produced what Mark Skaife called “the start of the season”, jumping from sixth place to first by turn one.

However, van Gisbergen had the winning strategy, delaying his mandatory pit stop until the final moment, re-entering a second ahead to pip Mostert in second and Courtney in third.

“I didn’t get a good start again but I couldn’t believe it when those guys pitted and gave me clear air,” van Gisbergen said.

“We were planning to do the undercut but they did it and we got the clear air. It worked really well.”

In the second race, van Gisbergen showed his class.

After a whole weekend meet without a drop of rain, the heavens opened with the cars stationed on the grid, leading pit teams to race onto the track to swap out slicks for wet tyres.

With visibility low and surface flooding across the whole circuit, stewards started the race with a safety car for two laps.

“It’s always good racing someone who has nothing to lose,” van Gisbergen said.

“I’m sort of speechless. I didn’t expect to go so well here this weekend … I struggled with feeling in the car all weekend, but it was super fast.”

Underlining his dominance, van Gisbergen took not only 300 points for three wins but the five bonus points on offer for fastest lap in each race.

Waters finished second and Brodie Kostecki stayed clear of drama to finish third and claim just his second podium of the season.

Further back, there was plenty of fizz.

Lee Holdsworth also caused a crash earlier in the day, taking off from a pit stop without looking and straight into the door of Scott Pye’s Commodore.