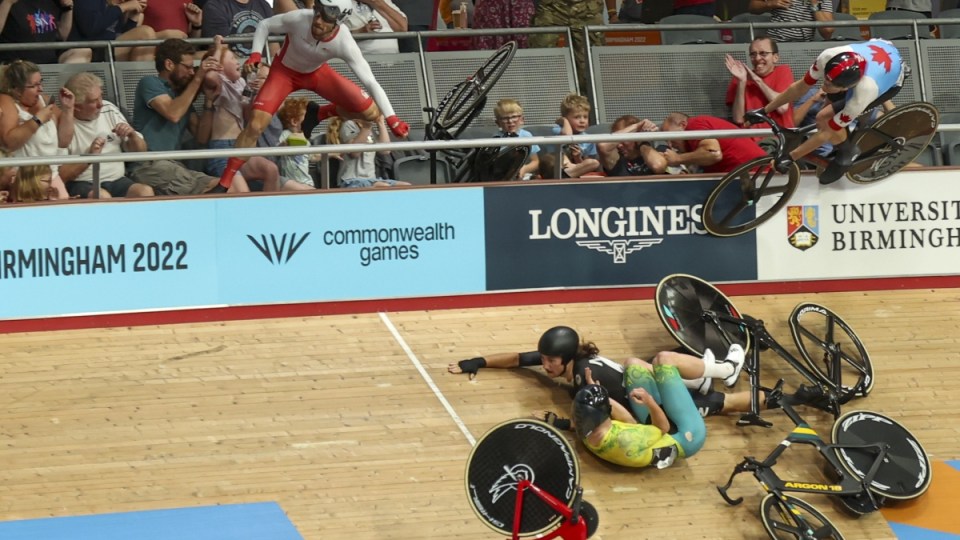 English Olympic champion Matt Walls has been injured after being catapulted over the barriers and into a horrified crowd in another high-speed crash at London’s velodrome.

Walls was being treated for injuries in the stands of the Lee Valley VeloPark after he was caught up in a multi-rider crash on the final lap of the Commonwealth Games 15km scratch race qualifier on Sunday.

British Cycling reported he would be going to hospital along with another rider, Isle of Man’s Matt Bostock, who had to be taken out of the arena on a stretcher.

One man in the crowd received treatment for cuts to his arm while a young girl also received minor attention.

Spectators were left ducking for cover after Olympic omnium champion Walls, high on the banking, was sent spiralling into the air, landing in the front seating section of the arena.

Walls was riding up the banking trying to avoid others who had fallen lower down, and appeared to clip another wheel before being sent flying over the top.

One spectator told AAP how Walls’ bike also came flying over the barrier, shooting along the row of spectators, in scenes that many experienced observers believed were unprecedented at a major track meeting.

Following a crash in the cycling men’s scratch race, Matt Walls has been taken to hospital for precautionary checks.

We send our best wishes to the riders and spectators involved in the incident, and will provide a further update when we can.

The morning session was suspended after the crash, the second high-speed spill in successive days after another English rider Joe Truman suffered a suspected broken collarbone after being taken out unwittingly by Australian Matt Glaetzer on Saturday.

Australian Josh Duffy was one of several riders who came down in Sunday’s accident but was reported by team officials to be unscathed.

A statement from British Cycling said: “Matt Walls & Matt Bostock are being treated by medics before being taken to hospital for further treatment.

“We send our best wishes to the riders and spectators involved in the incident, and will provide a further update when we can.”